Q’ = Irrational Numbers:
Real numbers which cannot be expressed in the form \(\frac { p }{ q }\) and whose decimal expansions are non-terminating and non-recurring.

Composite Numbers:
The natural numbers which are divisible by 1, itself and any other number or numbers are called composite numbers. For example, 4, 6, 8, 9, 10 etc.
Note: 1 is neither prime nor a composite number. 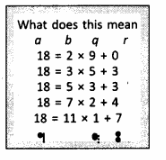 Since remainder is zero, divisor (8) is HCF.
Although Euclid’s Division lemma is stated for only positive integers, it can be extended for all integers except zero, i.e., b ≠ 0.

IV. Fundamental theorem of Arithmetic
Every composite number can be expressed as a product of primes, and this expression is unique, apart from the order in which they appear.
Applications:

1. Algorithm to locate HCF and LCM of two or more positive integers:

2. To prove Irrationality of numbers:

3. To determine the nature of the decimal expansion of rational numbers: