Topics and Subtopics in NCERT Solutions for Class 11 Chemistry Chapter 1 Some basic Concepts of Chemistry:

Question 3. Determine the empirical formula of an oxide of Iron which has 69.9 % iron and 30.1 % dioxygen by mass.
Answer:

Question 13. Pressure is determined as force per unit area of the surface. The S.I. unit of pressure, pascal, is as shown below:1 Pa = 1 Nm-2.If mass of air at sea level is 1034 g cm-2,calculate the pressure in pascal.

Question 15. Match the following prefixes with their multiples:

Question 17. A sample of drinking water was found to be severely contaminated with chloroform, CHCly supposed to be carcinogenic in nature. The level of contamination was 15 ppm (by mass).
(i) Express this in percent by mass
(ii) Determine the molality of chloroform in the water sample.
Answer:

Question 21. The following data were obtained when dinitrogen and dioxygen react together to form compounds: 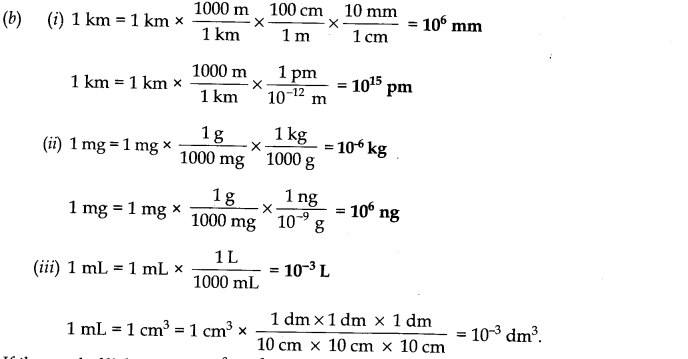 Question 24. Dinitrogen and dihydrogen react with each other to produce ammonia according to the following chemical equation:(i) N2 (g) + 3H2(g) —–> 2NH3 (g)
(ii) Will any of the two reactants remain unreacted?
(iii) If yes, which one and what would be its mass?
Answer:

Question 26. If ten volumes of dihydrogen gas reacts with five volumes of dioxygen gas, how many volumes of water vapour could be produced?
Answer: H2 and 02 react according to the equation

Question 31. How many significant figures should be present in the answer of the following?

Question 32. Use the data given in the following table to calculate the molar mass of naturally occurring argon.

Question 34. A welding fuel gas contains carbon and hydrogen only. Burning a small sample of it in oxygen gives 3.38 g carbon dioxide, 0.690 g of water and no other products. A volume of 10.0 L (measured at S.T.P.) of this welding gas is found to weigh 11.6 g. Calculate (i) empirical formula, (ii) molar mass of the gas, and (iii) molecular formula.
Answer: 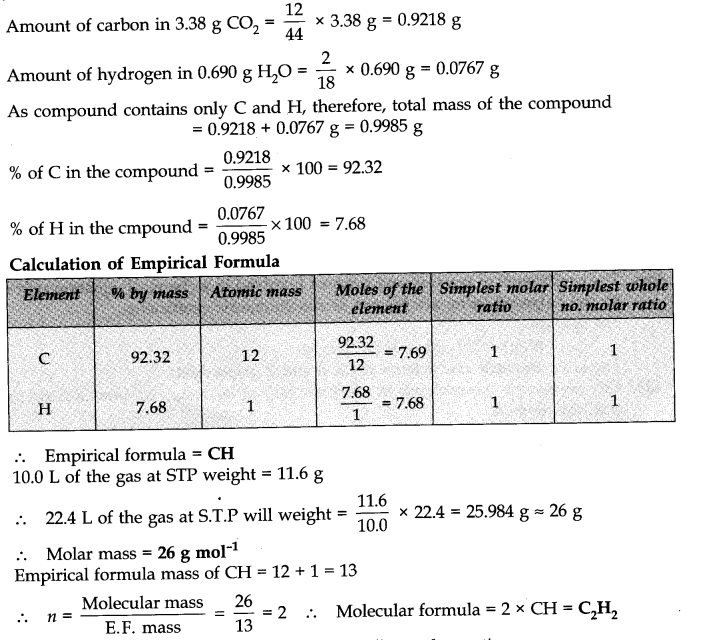 Question 35. Calcium carbonate reacts with aqueous HCl according to the reaction

Question 5. Why air is not always regarded as homogeneous mixture?
Answer: This is due to the presence of dust particles.

Question 6. Define the term ‘unit’ of measurement.
Answer: It is defined as the standard of reference chosen to measure a physical quantity.

Question 7. Define law of conservation of mass.
Answer: It states that matter can neither be created nor destroyed.

Question 11. State Avogadro’s law.
Answer: Equal volumes of all gases under the conditions of same temperature and pressure contain the same number of molecules.

II. Short Answer Type Questions
Question 1. Define molality. How does molality depend on temperature?
Answer: Molality is defined as the moles of solute per kilogram of solvent.

Molality of a solution does not depend on temperature.

Question 3. Express the following up to four significant figures.

Question 4. Calculate the number of moles in each of the following.
Answer:

Question 7. The density of water at room temperature is 1.0 g/mL. How many molecules are there in a drop of water if its volume is 0.05 mL?
Answer:

Question 8.What is the molecular mass of a substance each molecule of which contains 9 atoms of carbon, 13 atoms of hydrogen and 2.33 x 10-23 g other component?

III. Long Answer Type Questions
Question 1. Calculate no. of carbon and oxygen atoms present in 11.2 litres of C02 at N.T.P.

Answer: The chemical equation for the decomposition of KCl03 is

Question 3. 10 ml of a solution of NaCl containing KCl gave on evaporation 0.93 g of the mixed salt which gave 1.865 g of AgCl by reacting with AgN03solution. Calculate the quantity of NaCl in 10 mL of the solution.

Answer: The chemical equation for the reaction is: 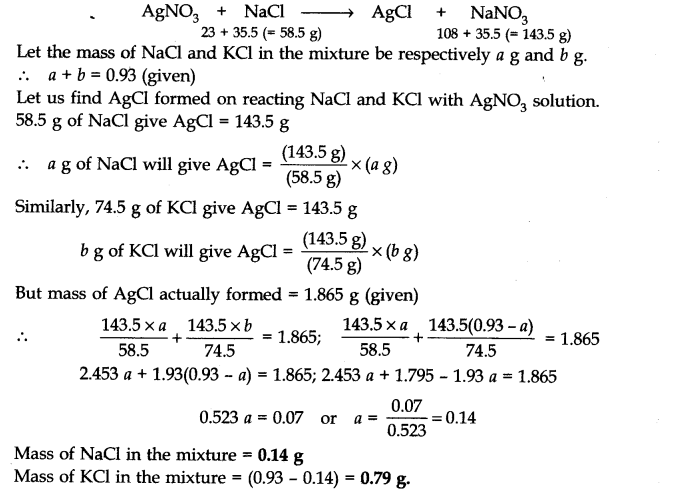 Question 6. Calculate the total number of electrons present in 1.6 g of methane.
Answer: 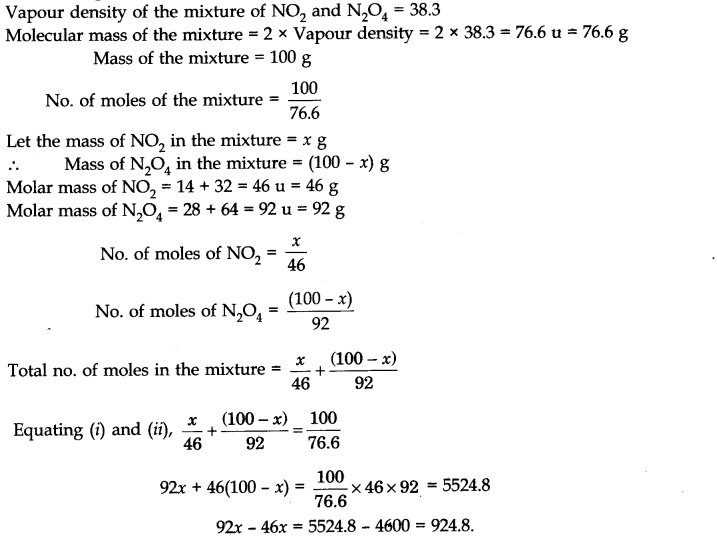 Question 8. The Vapour Density of a gaseous element is 5 times that of oxygen under similar conditions. If the molecule is triatomic, what will be its atomic mass?
Answer:  Molecular mass of oxygen = 32 u