Topics and Subtopics in NCERT Solutions for Class 11 Chemistry Chapter 11 The p-Block Elements:

Question 2. How can you explain higher stability of BCl3 as compared to TlCl3?
Answer: BCl3 is quite stable. Because there is absence of d- and f-electrons in boron three valence electrons (2s2 2px1) are there for bonding with chlorine atom. In Tl the valence s-electron (6s2) are experiencing maximum inert pair effect. Thus, only 6p1 electron is available for bonding. Therefore, BCl3 is stable but TlCl3 is comparatively unstable.

Question 3. Why does borontrifluori.de behave as a Lewis acid?
Answer: In BF3, central atom has only six electrons after sharing with the electrons of the F
atoms. It is an electron-deficient compound and thus behaves as a Lewis acid.

Question 4. Consider the compounds, BCl3, and CCl4. How will they’behave with water justify?
Answer: In BCl3, there is only six electrons in the valence shell of B atom. Thus, the octet is incomplete and it can accept a pair of electrons from water and hence BCl3 undergoes hydrolysis. Whereas, in CCl4, C atom has 8 electrons and its octet is complete. That’s why it has no tendency to react with water.
CCl4 + H20 —————> No reaction

Question 7. Describe the shapes of BF3 and BH4–. Assign the hybridisation of boron in these species.
Answer: In BF3, boron is SP2 hybridized.
∴ shape of BF3 = planar.
In [BH4]–, boron is sp3 hybridized, thus the shape is tetrahedral.

Question 10. Write the resonance structure of CO32- and HCO3– .
Answer:

Question 12. Explain the difference in properties of diamond and graphite on the basis of their structures.
Answer:

Question 16. Aluminium trifluoride is insoluble in anhydrous HF but dissolves on addition of NaF. Aluminium trifluoride precipitates out of the resulting solution when gaseous BF3 is bubbled through. Give reason.
Answer: Since, anhydrous HF is covalent compound and weak acid due to high bond dissociation energy. AlF3 does not dissolve in HF.
Whereas NaF is ionic compound.
3NaF + AlF3 ———> Na3[AlF6]
Na3[AlF6] + 3BF3(g) ——-> AlF3 + 3Na+ [BF]–

Question 17. Suggest a reason as to why CO is poisonous.
Answer: CO reacts with haemoglobin to form carboxyhaemoglobin which can destroy the oxygen carrying capacity of haemoglobin and the man dies of suffocation.

Question 18. How is excessive content of C02 responsible for global warming?
Answer: Excess of C02 absorbs heat radiated by the earth. Some of it is dissipated into the atmosphere while the remaining part is radiated back to the earth. As a result, temperature of the earth increases. This is the cause of global warming.

Question 19. Explain structures of diborane and boric acid.
Answer: Boric acid contains planar BO33- ions which are linked together through hydrogen bonding shown in the fig. 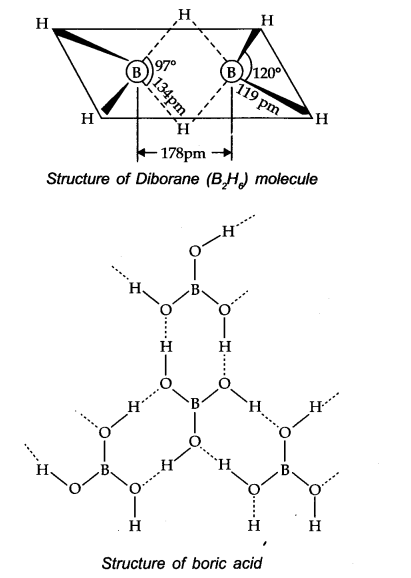 Question 20. What happens when
(a) Borax is heated strongly
(b) Boric acid is added to water
(c) Aluminium is treated with dilute NaOH
(d) BF3 is reacted with ammonia?
Answer:

Question 22. Give reasons:
(i) Cone. HNO3 can be transported in aluminium container.
(ii) A mixture of dilute NaOH and aluminium pieces is used to open drain.
(iii) Graphite is used as lubricant.
(iv) Diamond is used as an abrasive.
(v) Aluminium alloys are used to make aircraft body.
(vi) Aluminium utensils should not be kept in water overnight.
(vii) Aluminium wire is used to make transmission cables.
Answer: (i) Al reacts with cone. HNO3 to form a very thin film of aluminium oxide on its surface which protects it from further reaction.
2Al(s) + 6HNO3(conc.) ———> Al2O3(s) + 6NO2(g) + 3H2O(l)
(ii) NaOH reacts with Al to evolve H2 gas. Thus the pressure of the gas produced can be used for clogged drains.
2Al(s) + 2NaOH(aq) + 2H2O(l) ——-> 2NaAlO2(aq) + 3H2(g)
(iii) Graphite has layered structure which are held by weak van der Waals forces. Thus, graphite cleaves easily between the layers, therefore it is very soft and slippery. That’s why it is used as lubricant.
(iv) Diamond is used as an-abrasive because it is an extremely hard substance.
(v) Alloys of aluminium, like duralumin, is used to make aircraft body due to some of its property like toughness, lightness and resistant to corrosion.
(vi) Generally, aluminium metal does not react with water quickly but, when it is kept overnight, it reacts slowly with water in presence of air.
2Al(s) + O2(g) + H2O(l) ——–> Al2O3(S) + H2(g)
a very small amount of (in ppm) Al3+ produced in the solution is injurious to health if the water is used for drinking purposes.
(vii) Aluminium is generally unaffected by air and moisture and it is also good conductor of electricity. That’s why it is used in transmission cables. In diamond, carbon is SP3 -hybridized. Since, diamond is three dimensional network solid, it is hardest substance with high density whereas graphite has a layered structure. The various layers are formed by van der Waals forces of attraction that’s why graphite is soft and slippery.

Question 27. In some of the reactions thallium resembles aluminium, whereas in others it resembles with group 1 metals. Support this statement by giving some evidences.
Answer:  Tl shows both the oxidation state +1 and +3 due to inert pair effect. Tl forms basic oxide like group I elements. TlO2 is strongly basic.

Question 28. When metal X is treated with sodium hydroxide, a white precipitate (A) is obtained, which is soluble in excess of NaOH to give soluble complex (B). Compound (A) is soluble in dilute HCl to form compound (C). The compound (A) when heated strongly gives (D), which is used to extract metal. Identify (X), (A), (B), (C) and (D). Write suitable equations to support their identities.
Answer: Question 29. What do you understand by (a) inert pair effect (b) allotropy and (c) catenation?
Answer:  (a) Inert pair effect: The pair of electron in the valence shell does not take part in bond formation is called inert pair effect.
(b)Allotropy: It is the property of the element by which an element can exist in two or more forms which have same chemical properties but different physical properties due to their structures.
(c)Catenation: The property to form chains or rings not only with single bonds but also with multiple bonds with itself is called catenation.
For example, carbon forms chains with (C-C) single bonds and also with multiple bonds (C = C or C = C).

Question 30. A certain salt X, gives the following results.
(i) Its aqueous solution is alkaline to litmus.
(ii) It swells up to a glassy material Y on strong heating.
(iii) When cone.H2SO4is added to a hot solution of X, white crystal of an acid Z separates out.
Answer: Question 32. Give one method for industrial preparation and one for laboratory preparation of CO and C02 each.
Answer:

Question 38. If the starting material for the manufacture of silicons is RSiCl3 write the structure of the product formed.
Answer: Hydrolysis of aikyltrichlorosilanes gives cross-linked silicons. 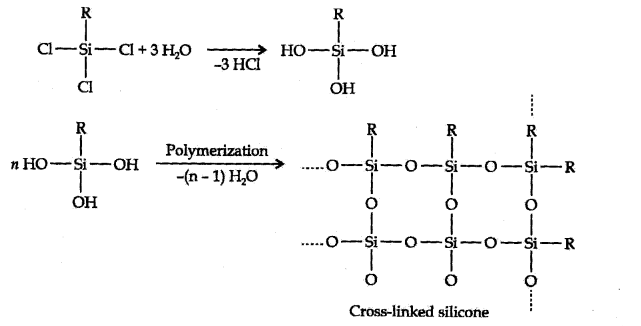 Question 1. Why is boron used in nuclear reactions?
Answer:  Because Boron can absorb neutrons.

Question 4. What is dry ice? Why is it so called?
Answer: Carbon dioxide can be obtained as a solid in the form of dry ice by allowing the liquified CO2 to expand rapidly.
Unlike ordinary ice it does not melt and hence does not wet the surface on which it is kept. Thus it is called dry ice.

Question 11. What happens when boric acid is heated?
Answer:

Question 12. CO2 is gas while SiO2 is solid at room temperature. Give reason.
Answer:  The molecules of CO2 are held together by weak van der Waals forces of attraction which can be easily overcome by collisions of the molecules at room temperature. Consequently CO2 is a gas.
On the other hand silicon atom forms four single covalent bonds with O-atom which are tetrahedrally arranged and form a three-dimensional structure. Thus SiO2 is a high melting solid.

Question 15. Mention the state of hybridisation of B in BH4.
Answer: sp2.

Question 4. (a) What is general formula of silicons?
(b) How are linear silicons obtained?
Answer: (a) R2SiO
(b) Linear silicons are obtained by the hydrolysis of R2SiCl2 (chlorosilanes).

Question 6. What are Fullerenes ? How are they prepared ?
Answer: Fullerenes are the allotropes of carbon. Its structure is like a soccer ball.
They are prepared by heating graphite in electric arc in presence of inert gases such as helium or argon.

Question 7.Give reason.
(i) C and Si are always tetravalent but Ge, Sn, Pb show divalency.
(ii) Gallium has higher ionization enthalpy than Al. Explain.
Answer: (i) Ge, Sn and Pb show divalency due to inert pair effect, Pb2+ is more stable than Pb4+ .
(ii) Due to poor shielding effect of d-electrons in Ga, effective nuclear charge increases as compared to Al. Thus the I.E of Ga is higher than Al.

Question 1. Explain the differences in properties of diamond and graphite based upon their structures.
Answer:

Question 2. Give reasons:
(a) Why do Boron halides form an additional compounds with NH3?
(b) The tendency for catenation decreases down the group in Group 14.
(c) PbO2 is a stronger oxidizing agent than SnO2.
Answer:  (a) It is because BX3 is an electron-deficient compound and NH3 is an electron-rich compound.
(b) As we move down group 14, the atomic size increases and thus the strength of the element decreases down the group thus the bond dissociation enthalpy decreases steadily consequently the tendency for catenation decreases down the group.
(c) PbO2 and SnO2 both are present in +4 oxidation state. But due to stronger inert pair effect Pb2+ ion is more stable than Sn2+ ion.
In other way Pb4+ ions is more easily reduced to Pb2+ions. Thus PbO2 acts as a stronger oxidising agent than SnO2.

Question 3. How is boron obtained from borax? Give chemical equations with reaction conditions.
Answer:

Question 1. Give reason for the following observations:-
(a) The tendency for catenation decrease down the group in Group 14.13.
(b) The decreasing stability of+3 oxidations state with increasing atomic number in group (c)Molten aluminium bromide is a poor conductor of electricity.
Answer: (a) It is due to decrease in bond dissociation energy which is due to increase in atomic size.
C-C > Si-Si > Ge-Ge > Sn-Sn > Pb-Pb
(b) It is due to inert pair effect.
(c) Molten AlBr3 is poor conductor of electricity because it is covalent compound.

Question 2. (a) Why do Boron halides form addition compound with NH3?
(b) Assign appropriate reason for each of the following observations:-
(i) Anhydrous AlCl3 is used as a catalyst in many organic reactions.
(ii) No form of elemental silicon is comparable to graphite.
Answer:  (a) It is because BX3 is electron deficient whereas NH3 is electron-rich.
(b) (i) It is Lewis acid.
(ii) It cannot form p π- pπ bond due to large size.