Question 1. Explain the formation of a chemical bond.
Answer: According to Kossel and Lewis, atoms combine together in order to complete their respective octets so as to acquire the stable inert gas configuration. This can occur in two ways; by transfer of one or more electrons from one atom to other or by sharing of electrons between two or more atoms. Question 3. Write Lewis symbols for the following atoms and ions: S and S2– ; Al and Al3+; H and H–
Answer:

Question 6. Write the favourable factors for the formation of ionic bond.
Answer: Question 8. Although geometries of NH3 and H20 molecules are distorted tetrahedral, bond angle in water is less than that of ammonia. Discuss.
Answer:

Because of two lone pairs of electrons on O-atom, repulsion on bond pairs is greater in H20 in comparison to NH3 . Thus, the bond angle is less in H20 molecules.

Question 10. Define the bond-length.
Answer:  Bond-length: It is the equilibrium distance between the nuclei of two bonded atoms in a molecule. Bond-lengths are measured by spectroscopic methods.

Question 11. Explain the important aspects of resonance with reference to the C032-ion.
Answer:

Resonance in C032-, I, II and III represent the three canonical forms.

Question 12. H3PO3 can be represented by structures 1 and 2 shown below. Can these two structures be taken as the canonical forms of the resonance hybrid representing H3PO3? If not, give reasons for the same.

Answer: No, these cannot be taken as canonical forms because the positions of atoms have been changed.

Question 13. Write the resonance structures for SO3,NO2 and NO3
Answer:

Question 14. Use Lewis symbols to show electron transfer between the following atoms to form cations and anions (a) K and S (b) Ca and O (c) Al and N.
Answer:

Question 15. Although both CO2 and H2O are triatomic molecules, the shape of H2O molecule is bent while that of CO2 is linear. Explain this on the basis of dipole moment.
Answer:  In CO2, there are two C=O bonds. Each C=O bond is a polar bond.
The net dipole moment of CO2 molecule is zero. This is possible only if CO2 is a linear molecule. (O=C=O). The bond dipoles of two C=O bonds cancel the moment of each other.
Whereas, H2O molecule has a net dipole moment (1.84 D). H2O molecule has a bent structure because here the O—H bonds are oriented at an angle of 104.5° and do not cancel the bond moments of each other.

Question 20. The skeletal structure of CH3COOH as shown below is correct, but some of the bonds are shown incorrectly. Write the correct Lewis structure for acetic acid.

Question 25. Describe the change in hybridisation (if any) of the Al atom in the following reaction.  AlCl3 + Cl– ——> AlCl4- .
Answer: Electronic configuration of 13Al = 1s2 2s2 2p6 3s1 3px13py1
(excited state)
Hence, hybridisation will be SP2
In AlCl–4, the empty 3pz orbital is also involved. So, the hybridisation is sp3 and the shape is tetrahedral.

Question 26. Is there any change in the hybridisation ofB and N atoms as a result of the following reaction ?  BF3 + NH3 ——-> F3 B.NH3
Answer: In BF3, B atom is sp2 hybridised. In NH3, N is sp3 hybridised.
After the reaction, hybridisation of B changes from sp2 to sp3.

Question 27. Draw diagrams showing the formation of a double bond and a triple bond between carbon atoms in C2 H4 and C2 H2 molecules.
Answer: Question 31. What do you understand by bond pairs and lone pairs of electrons? Illustrate by giving one example of each type.
Answer: The electron pair involved in sharing between two atoms during covalent bonding is called shared pair or bond pair. At the same time, the electron pair which is not involved in sharing is called lone pair of electrons.

Question 32. Distinguish between a sigma bond and a pi bond.
Answer:

Question 33. Explain the formation of H2 molecule on the basis of valence bond theory.
Answer: Let us consider the combination between atoms of hydrogen HA and HB and eA and eB be their respective electrons.
As they tend to come closer, two different forces operate between the nucleus and the electron of the other and vice versa. The nuclei of the atoms as well as their electrons repel each other. Energy is needed to overcome the force of repulsion. Although the number of new attractive and repulsive forces is the same, but the magnitude of the attractive forces is more. Thus, when two hydrogen atoms approach each other, the overall potential energy of the system decreases. Thus, a stable molecule of hydrogen is formed.

Question 35. Use molecular orbital theory to explain why the Be2 molecule does not exist.
Answer:

Question 38. Describe the hybridisation in case of PCl5. Why are the axial bonds longer as compared to equatorial bonds?
Answer: The ground state E.C. and the excited state E.C. of phosphorus are represented as:

The one s, three-p and one d-orbitals hybridise to yield five sets of SP3 d hybrid orbitals which are directed towards the five corners of a trigonal bipyramidal as in Fig. Question 40. What is meant by the term bond order? Calculate the bond order of  N2, O2, O2+,O2–
Answer:  Bond order is defined as the half of the difference between the number of electrons present in bonding and antibonding molecular orbitals. I. Very Short Answer Type Questions
Question 1. How is bond order related to the stability of a molecule?
Answer: Higher the bond order, greater is the stability.

Question 4. Write the Lewis dot symbols of the following elements and predict their valencies. (i) Cl (ii) P
Answer:

Question 6. Write the state of hybridisation of boron in BF3.
Answer:  SP2

Question 8. What is meant by bond pairs of electrons?
Answer: The electron pairs involved in the bond formation are known as bond pairs or shared pairs.

Question 11. Define covalent bond according to orbital concept?
Answer: Covalent bond can be formed by the overlap of the orbitals belonging to the two atoms having opposite spins of electrons.

Question 12. Why B2 is paramagnetic in nature while C2 is not?
Answer:  The molecular orbital electronic configuration of both B2 and C2 are.

Question 13. Why ethyl alcohol is completely miscible with water?
Answer: This is because ethyl alcohol forms H-bonds witfi water.

Question 17. How is bond order related to bond length of a molecule?
Answer:  Bond length is inversely proportional to bond order.

II. Short Answer Type Questions
Question 1.What is an electrovalent (or ionic) bond? Explain its formation with two examples.
Answer: When a chemical bond is formed by the complete transfer of electrons from one atom to another, so as to complete their outermost shell and therefore, aquire the stable noble gas configuration, the bond formed is called ionic bond or electrovalent bond. ‘
For Example, 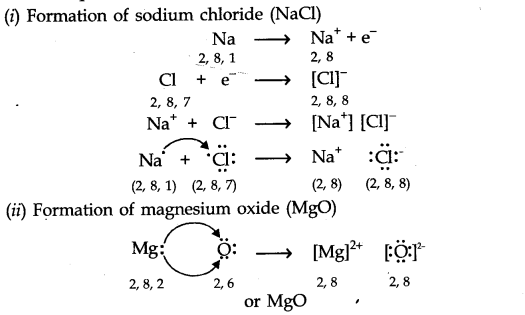 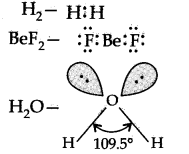 Question 5. Define Hybridisation. Explain sp hybridisation with suitable example.
Answer:  Hybridisation: It is the phenomenon of intermixing of atomic orbitals of slightly different energies to form new hybrid orbitals of equivalent energy,
Formation of water. In water (H20)> the atomic number of oxygen is 8 and its orbitals electronic configuration is 1s2 2s2 2px2 2py1 2pz1.The oxygen atom is also SP3 hybridised. However, in this case, the two orbitals with one electron each (half filled) are involved in overlap With the hydrogen orbitals.

Question 7. What do you mean by Dipole moment? Draw the dipole diagram of H2O.
Answer: The product of magnitude of charges (+ve, or -ve) and distance between them is called dipole moment. It is usually denoted by µ. 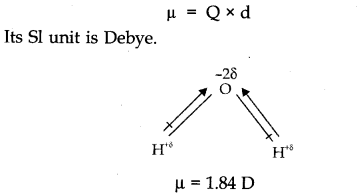 Question 9. Define bond order. How is it related to the stability of a molecule?
Answer: Bond order is defined as half of the difference between the number of electrons present in bonding and antibonding molecular orbitals.
Bond order (B.O.) = 1/2[Nb – Na ] z
If the bond order is positive (Nb > Na), the molecule or ion will be stable. If it is negative (Nb < Na)the molecule or ion will be unstable.

Question 10. Explain the diamagnetic behaviour of P2 molecule on the basis of molecular orbital theory.
Answer: Question 3. Discuss the orbital structures of the following molecules on the basis of hybridisation, (i) BH3 (ii) C2H2
Answer:

B atom gets hybridised to form three equivalent hybrid orbitals directed towards three comers of equilateral triangle with B atoms in the centre. Bond angle = 120°.

Question 4. (a) How many a and n bonds are present in

V. HOTS Questions
Question 1. Describe the hybridisation in case of PCl5. Why are the axial bonds longer as compared to equatorial bonds?
Answer:  The ground state and excited state outer electronic configurations of phosphorus (Z = 15) are:

Phosphorus atom is sp3 d hybridized in the excited state. These orbitals are filled by the electron pairs donated by five Cl atoms as:

The five sp3 d hybrid orbitals are directed towards the five comers of the trigonal bipyramidal. Hence, the geometry of PCl5 can be represented as:
There are five P-Cl sigma bonds in PCl5. Three P-Cl bonds lie in one plane and make an angle of 120° with each other. 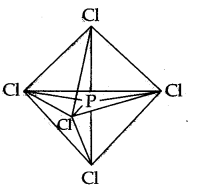 Question 2. Apart from tetrahedral geometry, another possible geometry for CH4 is square planar with the four H atoms at the comers of the square and the C atoms at its centre. Explain why CH4 is not square planar?
Answer: Electronic configuration of carbon atom: C: sigma 1s2 2s2 2p2.
In the excited state, the orbital picture of carbon can be represented as:

For a square planar shape, the hybridization of the central atom has to be dsp3. However, an atom of carbon does not have d-orbitals to undergo dsp3 hybridization. Hence, the structure of the CH4 is tetrahedral.

Question 3. Explain why the BeH2  molecule has a zero dipole moment although the Be-H bonds are polar.
Answer: The Lewis structure for BeH2 is as follows:

There is no lone pair at the central atom (Be) and there are two bond pairs. Hence, BeH2 is of the type AB2. It has a linear structure,

Dipole moments of each H —Be bond are equal and are in opposite directions. Therefore, they nullify each other. Hence, BeH2   has a zero dipole moment.