Question 2. Write the names of isotopes of hydrogen. What is the mass ratio of these isotopes?
Answer:

Question 3. Why does hydrogen occur in a diatomic form rather than in a monoatomic form under normal conditions?
Answer: In diatomic form, the K-shell of hydrogen is complete (1s2) and so it is quite stable.

With the removal of C02 the reaction shifts in the forward direction and thus, the production of dihydrogen will be increased.

Question 5. Describe the bulk preparation of dihydrogen by electrolytic method. What is the role of an electrolyte in this process?
Answer: In bulk, hydrogen can be produced by electrolysis of acidified water using Pt electrodes.

Electrolyte is added to increase the dissociation of water.

Question 7. Discuss the consequences of high enthalpy of H-H bond, in terms of chemical reactivity of dihydrogen.
Answer: This is due to its small atomic size and also small bond length (74 pm) of H-H bond.

Question 9. What characteristics do you expect from an electron-deficient hydride with respect to its structure and chemical reaction?
Answer: It is expected to be a Lewis acid. They are likely to accept electrons to become stable. They can form coordinate bond with electron rich compound.

Question 10. Do you expect the carbon hydride of type Cn H2n+2 to act as ‘Lewis’ acid or base? Justify your answer.
Answer: Carbon hydrides of the type Cn H2n+2 are electron precise hydrides. Because they have atom with exact number of electrons to form covalent bonds. Thus, they do not behave as Lewis acid or base. Since they have no tendency to accept or lose electrons.

Question 12. How do you expect the metallic hydrides to be useful for hydrogen storage? Explain.
Answer: In metallic hydrides, hydrogen is adsorbed as H-atoms. Due to the adsorption of H atoms the metal Lattice expands and become unstable. Thus, when metallic hydride is heated, it decomposes to form hydrogen and finely divided metal. The hydrogen evolved can be used as fuel.

Question 15. Saline hydrides are known to react with water violently producing fire. Can C02, a well known fire extinguisher, be used in this case? Explain.
Answer: No. Because if saline hydrides react with water the reaction will be highly exothermic thus the hydrogen evolved in this case can catch fire. C02 cannot be used as fire extinguisher because C02 will get absorbed in alkali metal hydroxides.

Question 17. Compare the structures of H2O and H2O2
Answer: In water, O is sp3 hybridized. Due to stronger lone pair-lone pair repulsions than bond pair-bond pair repulsions, the HOH bond angle decreases from 109.5° to 104.5°. Thus water molecule has a bent structure.

H2O2 has a non-planar structure. The O—H bonds are in different planes. Thus, the structure of H2O2 is like an open book. 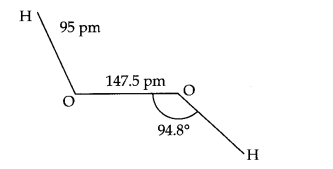 Question 18. What do you understand by the term ‘auto-protolysis’ of water? what is its significance?
Answer: Auto-protolysis means self-ionisation of water. It may be represented as

Due to auto-protalysis water is amphoteric in nature, i.e., it can act as an acid as well as base.

Question 19. Consider the reaction of water with F2 and suggest, in terms of oxidation and reduction, which species are oxidised/reduced ?
Answer:  2F2(ag) + 2H20(l)—————> O2(g) + 4H+(aq) + 4F(aq)
In this reaction water acts as a reducing agent and itself gets oxidised to O2 while F2 acts as an oxidising agent and hence itself reduced to F– ions.

Question 21. Describe the structure of common form of ice. Question 23. Discuss the principle and method of softening of hard water by synthetic ion-exchange resins.
Answer: Cation exchange resins have large organic molecule with S03H group which are insoluble in water. Ion exchange resin (RS03H) is changed to RNa on treatment with NaCl. The resin exchange Na+ ions with Ca2+ and Mg2+ ions present in hard water and make it soft.
2RNa(s) + M2+(aq) ——> R2M(s) + 2Na+(aq)
where, M = Mg, Ca.
The resins can be regenerated by adding aqueous NaCl solution.

Question 24. Write chemical reaction to show the amphoteric nature of water.
Answer: Water is amphoteric in nature because it acts as an acid

Question 28. Describe the usefulness of water in biosphere and biological systems.
Answer: (i) Major part of all living system is made of water.
(ii) It constitutes about 65 – 70% of body weights of animals and plants.
(iii) Some properties of water like high specific heat, thermal conductivity, surface tension, high polarity allow water to play a major role in biosphere.
(iv) Because of high heat of vaporisation it is responsible ro regulate temperature of living beings.
(v) It is an excellent fluid for the transportation of minerals and nutrients in plants.
(vi) It is also required for photosynthesis in plants.

Question 29. What properties of water make it useful as a solvent? What types of compound can it (i) dissolve (ii) hydrolyse?
Answer: Water is highly polar in nature thats why it has high dielectric constant and high dipole moment. Because of these properties, water is a universal solvent.
It can hydrolyse many oxides metallic or non-metallic, hydrides, carbides, nitrides etc.

Question 30. Knowing the properties of H2O and D2O, do you think D2O can be used for drinking purpose.
Answer: No, D2O is injurious to human beings, plants and animals.

Question 31. What is the difference between the terms ‘hydrolysis’ and ‘hydration’?
Answer: Hydrolysis is a chemical reaction in which a substance reacts with water under neutral, acidic or alkaline conditions. (iii) Syngas: The mixture of CO and H2 are called synthesis or syngas. It can be produced by the reaction of steam on hydrocarbon or coke at high temperature in the presence of nickel catalyst

(v) Fuel-Cell: It is a cell which converts chemical energy of fuel directly into electrical energy.

Question 1. Which isotope of hydrogen is radioactive?
Answer: Tritium.

Question 2. What is the importance of heavy water with regard to nuclear power generation ?
Answer: It is used as a moderator and helps to control the nuclear reaction.

Question 3. What is zeolite?
Answer: It is hydrated sodium aluminium silicate, Na2Al2Si2O8.xH2O.

Question 4. What is water gas? How is it prepared?
Answer: Mixture of CO and H2 in the ratio of 1 : 1 is called water gas.
It is prepared by passing steam over red hot coke.

Question 5. Write two uses of interstitial hydrides.
Answer: (i) In the storage of H2.
(ii) Catalyst for hydrogenation reaction.

Question 7. Give two advantages of using hydrogen over gasoline as a fuel.
Answer:

Question 9. What is perhydrol?
Answer:  Perhydrol is the trade name of H2O2. It is used as an antiseptic.

Question 10. What is meant by hard water?
Answer: Water which does not produce lathers with soap is known as hard water. Hardness is due to the presence of bicarbonates, sulphates and chlorides of Ca2+ and Mg2+ .

Question 12. Which compounds cause temporary hardness of water?
Answer: Ca(HCO3)2 and Mg (HCO3)2

Question 17. What is the use of hydrogen in the manufacture of Vanaspati Ghee?
Answer: H2 is used as reducing agent to convert vegetable oil into vegetable ghee.

Question 18. Name the phenomenon of adsorption of hydrogen on metal surface.
Answer: Occlusion.

Question 5. Explain the following:
(i) Temporary hardness can remove by boiling
(ii) Soft water lathers with soap but hard water not.
Answer: (i) On boiling, the bicarbonates of calcium and magnesium decompose to insoluble carbonate which can be removed by filteration.

(ii) Because of the presence of Ca2+ and Mg2+ ions in hard water which exchange with Na+ ions of the soap to form corresponding calcium and magnesium salts that form insoluble ppt.

Question 1. Account for the following:
(a) Can phosphorus with electronic configuration 3s2 3p3 form PH5?
(b) Water is responsible for moderation of body temperature. How?
(c) Hard water is not suitable for boilers as well as for laundary.
Answer:  (a) High ∆aH value of dihydrogen and less negative value of ∆eg H of hydrogen do not favour to exhibit highest oxidation state of P and consequently the formation of PH5, although P exhibit +3, +5 oxidation states.
(b) Because of high heat of vapourisation and high heat capacity.
(c) Hard water form precipitate with soap and deposition of salts in the form of scales.

Question 2. Can we use concentrated sulphuric acid and pure zinc in the preparation of dihydrogen?Write the chemical reactions to show the amphoteric nature of water. Why is hydrogen peroxide stored in wax-lined plastic coloured bottles ?
Answer:  (a) Cone. H2S04 cannot be used because it acts as an oxidizing agent also and gets reduced to SO2.
Zn + 2H2S04 (Cone.) ———> ZnS04+ 2H2O + SO2
Pure Zn is not used because it is non-porous and reaction will be slow. The impurities in Zn help in constitute of electrochemical couple and speed up reaction.
(b) Water is amphoteric in nature and it behaves both as an acid as well as base. With acids stronger than itself (e.g., H2S) it behaves as a base and with bases stronger than itself (e.g., NH3) it acts as an acid.
(i) As a base: H2O(I) + H2S(aq) ——-> H3O(aq) + HS–(aq)
(ii) As an acid: H2O(I) + NH3(aq) ———> OH–(aq) + NH4+(aq)
(c) The decomposition of H2O2 occurs readily in the presence of rough surface (acting as catalyst). It is also decomposed by exposure of light. Therefore, waxlined smooth surface and coloured bottles retard the decomposition of H2O2.