Question 1.  Assign oxidation number to the underlined elements in each of the following species: 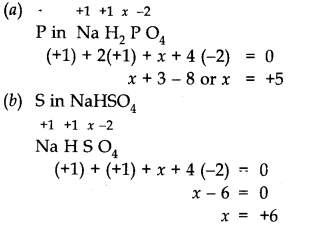 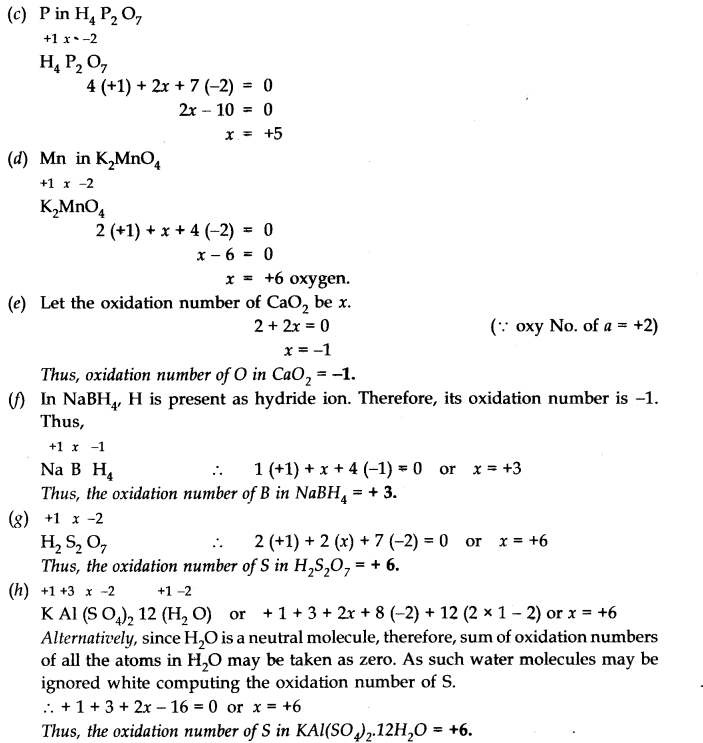 Question 2. What are the oxidation number of the underlined elements in each of the following and how do you rationalise your results ? 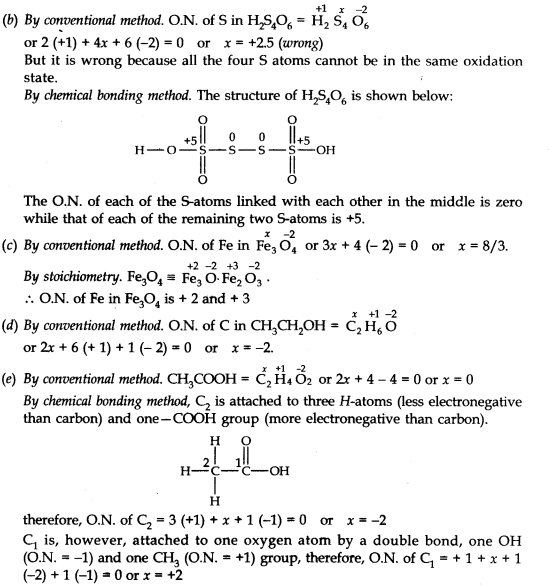 Here O.N. of Fe decreases from +3 if Fe2O3 to 0 in Fe while that of C increases from +2 in CO to +4 in CO2. Further, oxygen is removed from Fe2O3 and added to CO, therefore, Fe2O3 is reduced while CO is oxidised. Thus, this is a redox reaction.

Here, O.N. of B decreases from +3 in BrCl3to -3 in B2H6 while that of H increases from -1 in LiAlH4to +1 in B2H6. Therefore, BCl3 is reduced while LiAlH4 is oxidised. Further, H is added to BCl3 but is removed from LiAlH4, therefore, BC13 is reduced while LiAlH4 is oxidised. Thus, it is a redox reaction.
Here, each K atom as lost one electron to form K+ while F2 has gained two electrons to form two F– ions. Therefore, K is oxidised while F2 is reduced. Thus, it is a redox reaction.
By chemical bonding, C2 is attached to three H-atoms (less electronegative than carbon) and one CH2OH group (more electronegative than carbon), therefore,

Question 5. Calculate the oxidation number of sulphur, chromium and nitrogen in H2SO5, Cr2O2 and NOT. Suggest structure of these compounds. Count for the fallacy.

Thus, there is no fallacy about the O.N. of N in N03–whether one calculates by conventional method or by chemical bonding method.

Question 7. Suggest a list of substances where carbon can exhibit oxidation states from -4 to +4 and nitrogen from -3 to +5.
Answer:

(a) Therefore, it is more appropriate to write the equation for photosynthesis as (iii) because it emphasises that 12H2O are used per molecule of carbohydrate formed and 6H2O are produced during the process.
(b) The purpose of writing O2 two times suggests that O2  is being obtained from each of the two reactants.

Question 12. How do you account for the following observations?
(a) Though alkaline potassium permanganate and acidic potassium permanganate both are used as oxidants, yet in the manufacture of benzoic acid from toluene we use alcoholic potassium permanganate as an oxidant. Why? Write a balanced redox equation for the reaction.
(b) When concentrated sulphuric acid is added to an inorganic mixture containing chloride, we get colourless pungent smelling gas HCl, but if the mixture contains bromide then we get red vapour of bromine. Why?
Answer: (a) Toluene can be oxidised to benzoic acid in acidic, basic and neutral media according to the following redox equations: 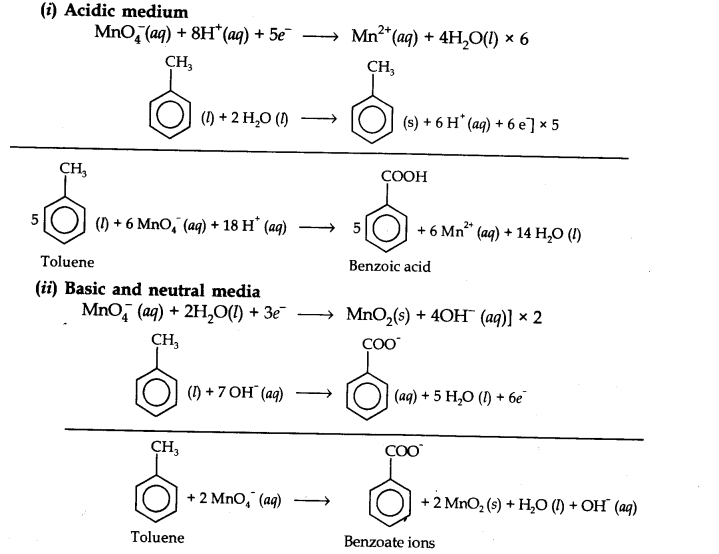 In the laboratory, benzoic acid is usually prepared by alkaline KMnO4 oxidation of toluene. However, in industry alcoholic KMnO4 is preferred over acidic or alkaline KMnO4 because of the following reasons:
(i) The cost of adding an acid or the base is avoided because in the neutral medium, the base (OH- ions) are produced in the reaction itself.
(ii) Since reactions occur faster in homogeneous medium than in heterogeneous medium, therefore, alcohol helps in mixing the two reactants, i.e., KMnO4 (due to its polar nature) and toluene (because of its being an organic compound).
(b) When cone. H2S04 is added to an inorganic mixture containing chloride, a pungent smelling gas HCl is produced because a stronger acid displaces a weaker acid from its salt.

Since HCl is a very weak reducing agent, it can not reduce H2S04 to S02 and hence HCl is not oxidised to Cl2.
However, when the mixture contains bromide ion, the initially produced HBr being a strong reducing agent than HCl reduces H2S04to S02 and is itself oxidised to produce red vapour of Br2.

Question 13. Identify the substance oxidised, reduced, oxidising agent and reducing agent for each of the following reactions.

Question 16. Why does the following reaction occur? 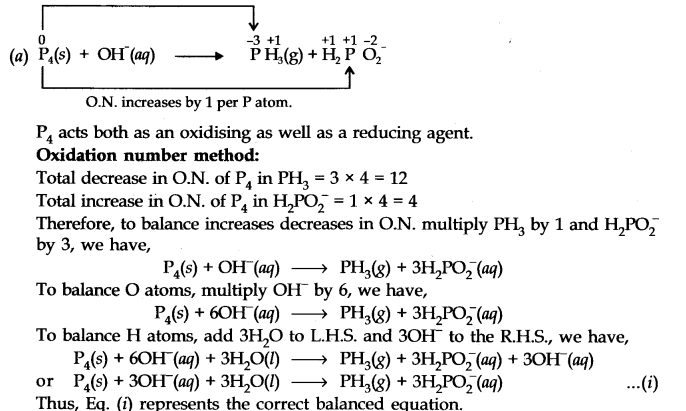 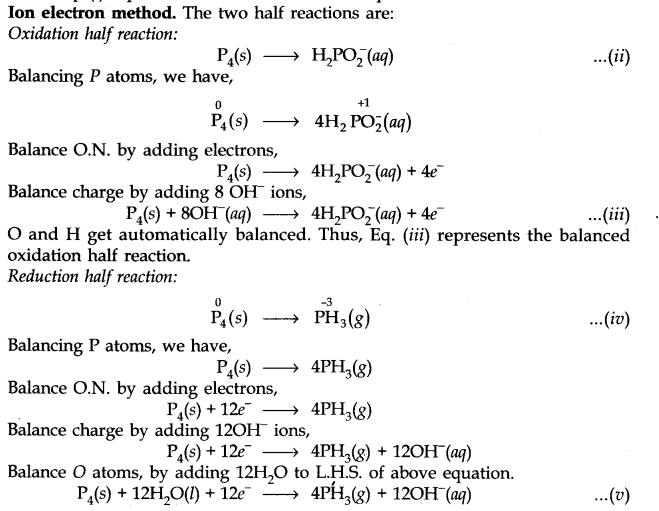 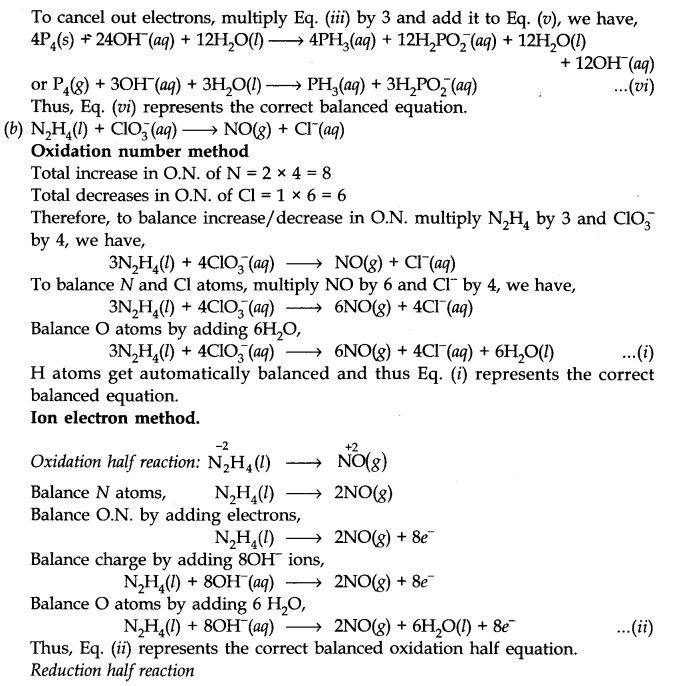 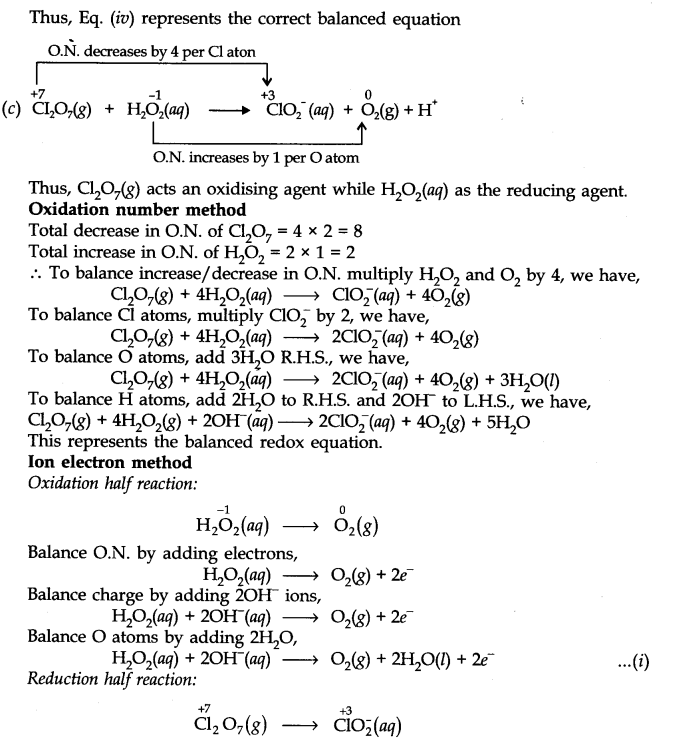 Question 21. The Mn3+ ion is unstable in solution and undergoes disproportionation to give Mn2+, MnO2 and H+ ion. Write a balanced ionic equation for the reaction.
Answer: 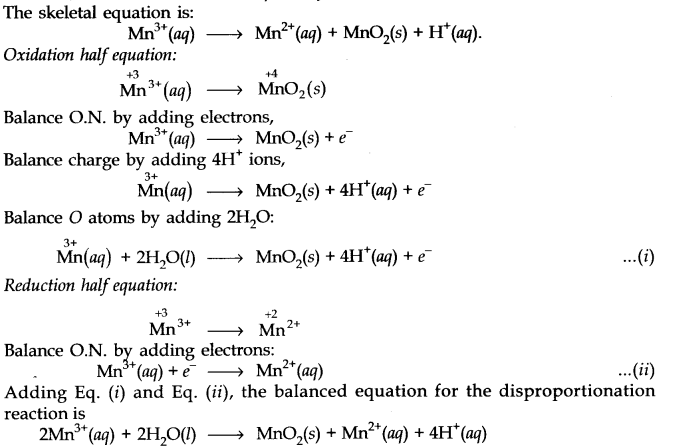 Question 23. Chlorine is used to purify drinking water. Excess of chlorine is harmful. The excess chlorine is removed by treating with sulphur dioxide. Present a balanced equation for the reaction for this redox change taking place in water.
Answer: The skeletal equation is: 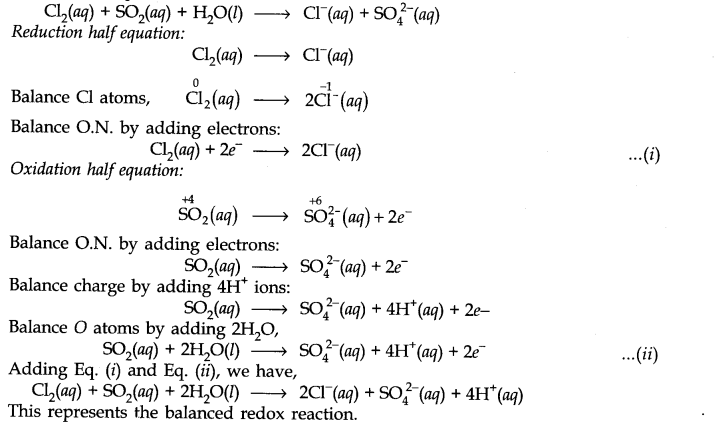 Question 25. In Ostwald’s process for the manufacture of nitric add, the first step involves the oxidation of ammonia gas by oxygen gas to give nitric oxide gas and steam. What is the maximum wight of nitric oxide that can be obtained starting only with 10.0 g of ammonia and 20.0 g of oxygen?
Answer: The balanced equation for the reaction is: 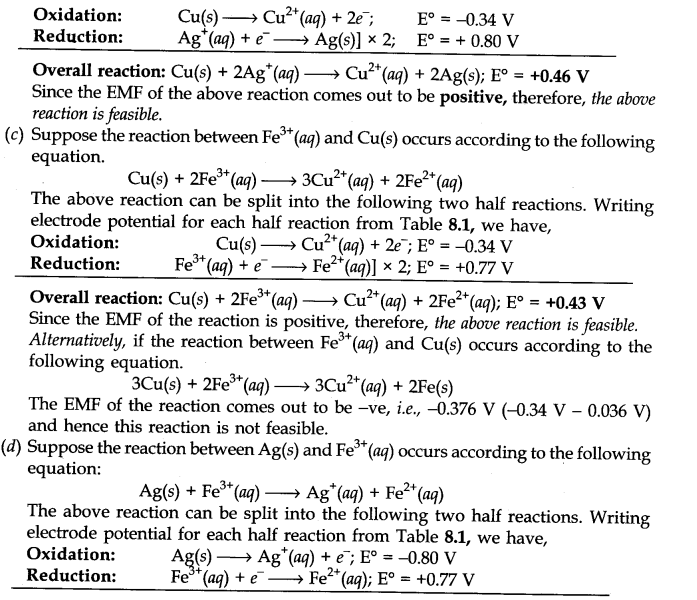 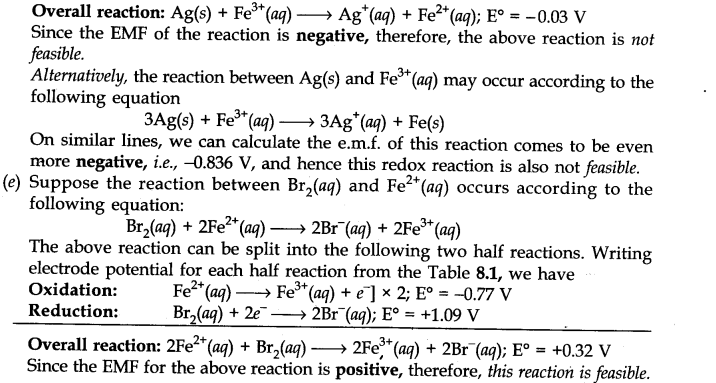 Question 28. Arrange the following metals in the order in which they displace each other from the solution of their salts.Al, Cu, Fe, Mg and Zn.
Answer: It is based upon the relative positions of these metals in the activity series. The correct order is Mg, Al, Zn, Fe, Cu .

Question 2. What is a redox couple?
Answer: A redox couple consists of oxidised and reduced form of the same substance taking part in the oxidation or reduction half reaction.

Question 3. Define oxidation in terms of electronic concept.
Answer: Oxidation involves loss of one or more electrons by a species during a reaction.

Question 6. What is the oxidation number of P in H3P04?
Answer:

Question 7. What is salt bridge?
Answer:  It is a U-shaped tube filled with agar-agar containing inert electrolyte like KCl or KNO3 which does not react with solutions.

Question 12. What is meant by cell potential?
Answer: It is the difference in Standard Reduction Potential (SRP) of cathode and SRP of anode.

Question 15. Define EMF of cell.
Answer: EMF of a cell is the difference in the electrode potentials of the two electrodes in a cell when no current flows through the cell.

Question 17. How can CuS04 solution not be stored in an iron vessel?
Answer:

Question 3. Consider a voltaic cell constructed with the following substances:

Question 8. (a) Balance the following equation by oxidation number method or by ion electron (half reaction) method.

Question 9. Identify the substance oxidised, reduced, oxidising agent and reducing agent for each of the following reactions.

Question 10. (a) Calculate the oxidation number of
(i) C in CH3COOH (ii) S in S2O8-2
(b) Give one example of disproportionation reaction.
Answer: 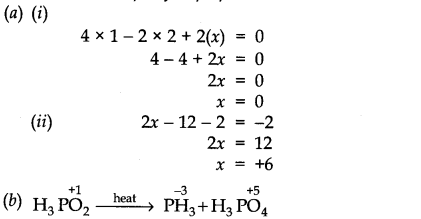 Since P undergoes decrease as well as increase in oxidation state thus it is an example of disproportionation reaction.

Question 9. Which one among the following is not example of autoredox reaction?

Question 2. Account for the following:
(a) While H2O2 can act as oxidising as well as reducing agent in their reactions, O3 and HNO3 acts as oxidants only.
(b) When cone. H2S04 is added to an inorganic mixture containing chloride, HCl is produced but if a mixture contains bromide, then we get red vapours of bromine.
Answer: (a) In H2O2 oxidation number of O = -1 and can vary from 0 to -2 (+2 is possible in OF2). The oxidation number can decrease or increase, because of this H202 can act both oxidising and reducing agent.
(b) HCl is a weak reducing agent and can reduce H2S04to SO2and hence HCl is not oxidised to Cl2. When NaBr is heated Br2 is produced, which is a strong reducing agent and itself oxidised to red vapour of Br2.