Question 1.
Which of the following cannot be used for measurement of time?
(a) A leaking tap.
(b) Simple pendulum.
(c) Shadow of an object during the day.
(d) Blinking of eyes.
Solution:
(d) Eyes do not blink at fixed interval of time.

Question 2.
Two clocks A and Bare shown in figure. Clock A has an hour and a minute hand, whereas clock B has an hour hand, minute hand as well as a ‘ second hand. Which of the following statement is correct for these clocks? Question 3.
Two students were asked to plot a distance¬time graph for the motion described by table A and table B. The graph given in figure is true for
(a) both A and B.
(b) A only.
(c) Sonly.
(d) neither A nor B.
Solution:
(a) Distance time graph for uniform motion shows a straight line. Slope is same for both table A and table B. 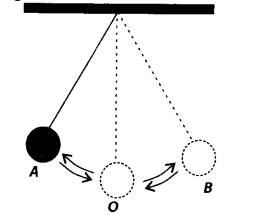 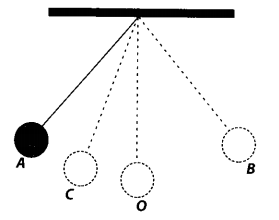 Question 10.
A simple pendulum is oscillating between two points A and B as shown in figure. Is the motion of the bob uniform or non-uniform? 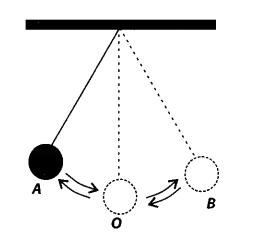 Solution:
Motion of the bob is non-uniform as its speed keeps changing.

Question 13.
Complete the data of the table given below with the help of the distance-time graph given in figure. Question 16.
Starting from A, Paheli moves along a rectangular path ABCD as shown in figure 7. She takes 2 minutes to travel each side. Plot a distance-time graph and explain whether the motion is uniform or non-uniform. 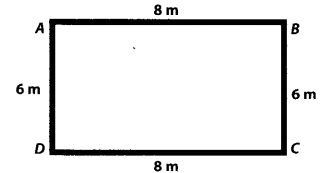 Solution:
Since the distance covered per unit time for the entire rectangular path covered is not the same, the motion is non-uniform. Question 17.
Plot a distance-time graph of the tip of the second hand of a clock by selecting 4 points on x-axis and y-axis respectively. The circumference of the circle traced by the second hand is 64 cm.
Solution: 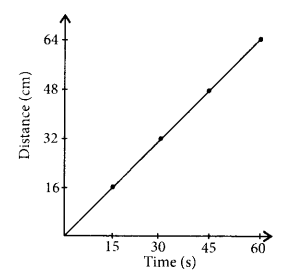 Question 18.
Figure given below is the distance-time graph of the motion of an object. Question 20.
Boojho goes to the football ground to play football. The distance-time graph of his journey from his home to the ground is given as figure. (a) What does the graph between point B and C indicate about the motion of Boojho?
(b) Is the motion between 0 to 4 minutes uniform or non-uniform?
(c) What is his speed between 8 and 12 minutes of his journey?
Solution:
(a) Graph between point B and C is a horizontal line which indicates that Boojho is at rest, i.e. his speed is zero.
(b) Motion between 0 to 4 minutes is non-uniform as distance-time graph for this time interval is not a straight line.