Question 1.
Observe the picture given in figure carefully. 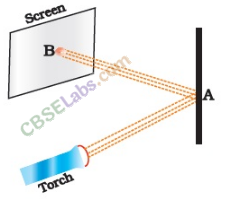 A patch of light is obtained at B, when the torch is lighted as shown. Which of the following is kept at position A to get this patch of light?
(b) A glass sheet
(c) A mirror
(d) A sheet of white paper,
Solution:
Only a mirror can reflect a patch of light and change its direction.

Question 2.
A student observes a tree given in figure through a pinhole camera. Which of the diagrams given in figures (a) to (d), depicts the image seen by her correctly? Solution:
(b:) She will observe upside down image of the tree with lateral inversion.

Question 3.
Four students A, B, C and D looked through pipes of different shapes to see a candle flame as shown in figure. Question 6.
Which of the following can never form a circular shadow?
(a) A ball
(b) A flat disc
(c) A shoe box
(d) An ice cream cone
Solution:
(c)

Question 7.
Two students while sitting across a table looked down on to its top surface. They noticed that they could see their own and each other’s image. The table top is likely to be made of
(a) unpolished wood
(b) red stone
(c) glass sheet
(d) wood top covered with cloth
Solution:
(c): Out of the given options, only glass sheet can reflect light properly in order to form their images.

Question 8.
You have 3 opaque strips with very small holes of different shapes as shown in figure. If you obtain an image of the sun on a wall through these holes, will the image formed by these holes be the same or different?

Solution:
Same image will be formed by these holes. These opaque strips will act as pinholes and image of the sun will be obtained on wall.

Question 9.
Observe the picture given in figure. A sheet of some material is placed at position ‘P’, still the patch of light is obtained on the screen. What is the type of material of this sheet? Solution:
Sheet P must be of transparent material as it allows light to pass through it.

Question 10.
Three torches A, B and C shown in figure are switched on one by one. The light from which of the torches will not form a shadow of the ball on the screen. Solution:
The light from torch C will not form a shadow of the ball on the screen. Torch C is parallel to the screen and light travels in straight line.

Question 11.
Look at the given figure. Question 15.
You are given a transparent glass sheet. Suggest any two ways to make it translucent without breaking it.
Solution:
(i) By applying oil, grease, butter on it or pasting a butter paper on it.
(ii) Grinding (rubbing) the surface of the glass by any abrasive material.

Question 16.
A torch is placed at two different positions A and B, one by one, as shown in figure. The shape of the shadow obtained in two positions is shown in figure.

Question 17.
A student covered a torch with red cellophane sheet to obtain red light. Using the red light she obtains a shadow of an opaque object. She repeats this activity with green and blue light. Will the colour of the light affect the shadow? Explain.
Solution:
Maim The colour of light will not affect the shadow because shadow is the dark patch r formed when an object obstructs the path of
light and hence no light reaches in the shadow region.

Question 18.
Is air around us always transparent? Discuss.
Solution:
Mann Air around us is transparent but when thick smoke/ thick clouds, etc. are present in ‘ the air it does not remain transparent.

Question 21.
In figure, a flower made of thick coloured paper has been pasted on the transparent glass sheet.What will be the shape and colour of shadow seen on the screen? Solution:
The shadow formed will be dark and of the shape of the flower along with the stalk.

Question 23.
A student had a ball, a screen and a torch in working condition. He tried to form a shadow of the ball on the screen by placing them at different positions. Sometimes the shadow was not obtained. Explain.
Solution:
Some of the reason can be
(i) The screen is far away from the ball.
(ii) The beam of light from the torch is falling parallel to the screen on the ball.
(iii) The torch is kept away from the ball.

Question 24.
A sheet of plywood, a piece of muslin cloth and that of a transparent glass, all of the same size and shape were placed at A one by one in the arrangement shown in figure. Will the shadow be formed in each case. If yes, how will the shadow on the screen be different in each case? Give reasons for your answer.

Solution:
Shadow will not be formed in each case. Only the piece of muslin cloth and the sheet of plywood will cast shadow on the screen.
The sheet of plywood will form a dark shadow as it blocks the path of light completely. The piece of muslin cloth will form a lighter shadow as it allows light to pass through it partially. The transparent glass will allow most of the light to pass through it. So, no shadow will be obtained on screen.