In 1900 J.J. Thomson discovered the sub-atomic particle—the electron with a negative charge. 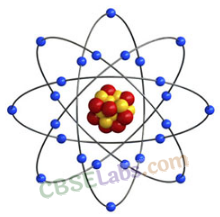 Structure of an Atom

2.Rutherford’s model of an atom α-Particles: (+ 2 charge and 4 mass) when fast-moving a-particles are bombarded on very thin gold foil, following observations were made:

Conclusions made by Rutherford based on his observations:

Nuclear Model of an Atom

Drawbacks of Rutherford’s model of the atom: When an electron undergoes acceleration, it radiates energy. Thus revolving electron would lose energy and finally fall into the nucleus. Due to this atom should be highly unstable and hence matter would not exist in the form that we know.
But we know that atoms are quite stable.
Bohr’s Model of Atom
Postulates of Neil Bohr Neutrons
Distribution of electrons in different orbits (Shells) given by Bohr and Bury: Rules: