Q12. While travelling to higher altitudes, people can feel pain in the ear and dizziness. Which part, among the following is involved?
(a) Cochlea, ear ossicles
(b) Tympanic membrane
(c) Eustachian tube, utricle, saccule and semicircular canals
(d) None of the above
Ans: (c)

Q5. During resting potential, the axonal membrane is polarised, indicate the movement of +ve and -ve ions leading to polarisation diagrammatically.
Ans: Neurons are excitable cells because their membranes are in a polarised state. Different types of ion channels are present on the neural membrane. These ion channels are selectively permeable to different ions. When a neuron is not conducting any impulse, i.e., resting, the axonal membrane is comparatively more permeable to potassium ions (K+) and nearly impermeable to sodium ions (Na+). Similarly, the membrane is impermeable to negatively charged proteins present in the axoplasm. Consequently, the axoplasm inside the axon contains high concentration of K+ and negatively charged proteins and low concentration of Na+. In contrast, the fluid outside the axon contains a “low concentration of K+, a high concentration of Na+ and thus form a concentration gradient. These ionic gradients across the resting membrane are maintained by the active transport of ions by the sodium-potassium pump which transports 3 Na+ outwards for 2 K+ into the cell. As a result, the outer surface of the axonal membrane possesses a positive charge while its inner surface becomes negatively charged and therefore is polarised. The electrical potential difference across the resting plasma membrane is called as the resting potential. Q6. Name the structures involved in fhe protection of the brain.
Ans: The human brain is well protected by the skull. Inside the skull, the brain is covered by cranial meninges consisting of an outer layer called dura mater, a very thin middle layer called arachnoid and an inner layer (which is in contact with the brain tissue) called pia mater. Piamater is a vascular membrane which is richly supplied with blood capillaries. Space between the duramater and arachnoid is called subdural space. Space between the arachnoid and pia mater is called subarachnoid space. Subarachnoid space is filled with the cerebrospinal fluid (CSF) which acts as a cushion for CNS from shocks.

Q7. Our reactions like aggressive behaviour, use of abusive words, restlessness etc. are regulated by brain, name the parts involved.
Ans: Limbic system and hypothalamus

Q8. What do grey and white matter in the brain represent?
Ans: The layer of cells which covers the cerebral hemisphere is called cerebral cortex and is thrown into prominent folds. The cerebral cortex is referred to as the grey matter due to its greyish appearance. The neuron cell bodies are concentrated here giving the colour. Fibres of the tracts are covered with the myelin sheath, which constitute the inner part of cerebral hemisphere. They give an opaque white appearance to the layer and, hence, is called the white matter.

Q9. Where is the hunger centre located in human brain?
Ans: Hypothalamus

Q10. Which sensory organ is involved in vertigo (sensation of oneself or objects spinning around)?
Ans: Vestibular apparatus of inner ear

Q11. While travelling at a higher altitude, a person complains of dizziness and vomiting sensation. Which part of the inner ear is disturbed during the journey?
Ans: Vestibular apparatus (saccule, utricle and semicircular canals)

Q12. Complete the statement by choosing appropriate match among the following:

Short Answer Type Questions
Q1. The major parts of the human neural system is depicted below. Fill in the empty boxes with appropriate words. 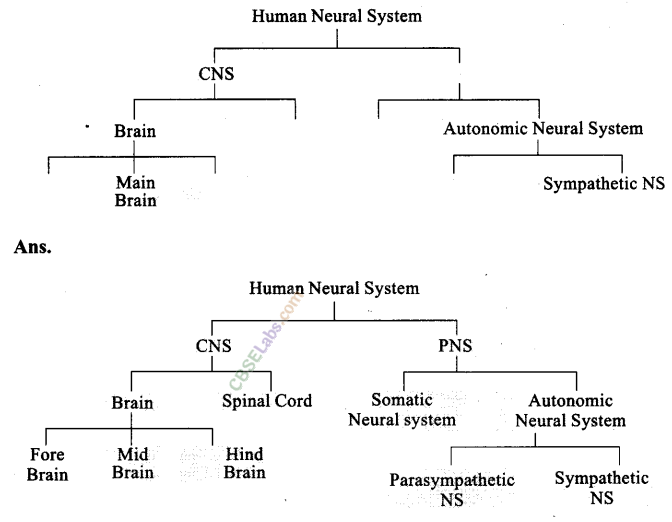 Q6. Label the following parts in the given diagram using arrow. 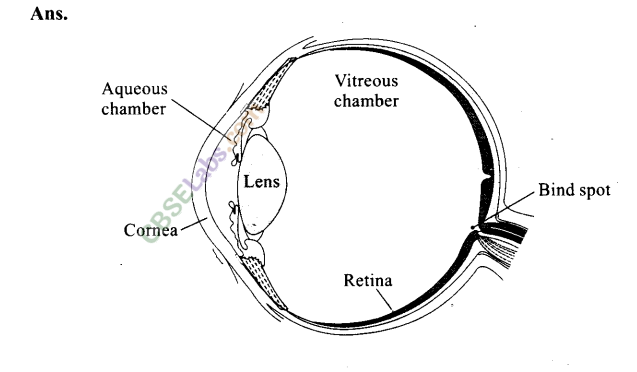 Long Answer Type Questions
Q1. Explain the process of the transport and release of a neurotransmitter with the help of a labelled diagram showing a complete neuron, axon terminal and synapse.
Ans: A nerve impulse is transmitted from one neuron to another through junctions called synapses. A synapse is formed by the membranes of a presynaptic neuron and a postsynaptic neuron, which may or may not be separated by a gap called synaptic cleft. At a chemical synapse, the membranes of the pre- and post-synaptic neurons are separated by a fluid-filled space called synaptic cleft. Chemicals called neurotransmitters are involved in the transmission of impulses at these synapses. The axon terminals contain vesicles filled with these neurotransmitters. When an impulse (action potential) arrives at the axon terminal, it stimulates the movement of the synaptic vesicles towards the membrane where they fuse with the plasma membrane and release their neurotransmitters in the synaptic cleft. The released neurotransmitters bind to their specific receptors, present on the postsynaptic membrane. This binding opens ion channels allowing the entry of ions which can generate a new potential in the postsynaptic neuron. The new potential developed may be either excitatory or inhibitory. Q2. Name the parts of human forebrain indicating their respective functions.
Ans: Forebrain:
The forebrain consists of cerebrum, thalamus and hypothalamus. Cerebrum forms_ the major part of the human brain. A deep cleft divides the cerebrum longitudinally into two halves, which are termed as the left and right cerebral hemispheres. The hemispheres are connected by a tract of nerve fibres called corpus callosum. The layer of cells which covers the cerebral hemisphere is called cerebral cortex and is thrown into prominent folds. The cerebral cortex is referred to as the grey matter due to its greyish appearance. The neuron cell bodies are concentrated here giving the colour. The cerebral cortex contains motor areas, sensory areas and large regions that are neither clearly sensory nor motor in function. These regions called as the association areas are responsible for complex functions like intersensory associations, memory and communication. Fibres of the tracts are covered with the myelin sheath, which constitute the inner part of cerebral hemisphere. They give an opaque white appearance to the layer and, hence, is called the white matter. The cerebrum wraps around a structure called thalamus, which is a major coordinating centre for sensory and motor signaling. Another very important part of the brain called hypothalamus lies at the base of the thalamus. The hypothalamus contains a number of centres which control body temperature, urge for eating and drinking. It also contains several groups of neurosecretory cells, which secrete hormones called hypothalamic hormones. The inner parts of cerebral hemispheres and a group of associated deep structures like amygdala, hippocampus, etc., form a complex structure called the limbic lobe or limbic system. Along with the hypothalamus, it is involved in the regulation of sexual behaviour, expression of emotional reactions (e.g., excitement, pleasure, rage and fear), and motivation.

Q3. Explain the structure of middle and internal ear with the help of diagram.
Ans: The middle ear contains three ossicles called malleus, incus and stapes which are attached to one another in a chainlike fashion. The malleus is attached to the tympanic membrane and the stapes is attached to the oval window of the cochlea. The ear ossicles increase the efficiency of transmission of sound waves to the inner ear. A Eustachian tube connects the middle ear cavity with the pharynx. The Eustachian tube helps in equalising the pressures on either sides of the ear drum. • The fluid-filled inner ear called labyrinth consists of two parts, the bony and the membranous labyrinths. The bony labyrinth is a series of channels. Inside these channels lies the membranous labyrinth, which is surrounded by a fluid called perilymph. The membranous labyrinth is filled with a fluid called endolymph. The coiled portion of the labyrinth is called cochlea. The membranes constituting cochlea, the Reissner’s and basilar, divide the surrounding perilymph filled bony labyrinth into an upper scala vestibuli and a lower scala tympani. The space within cochlea called scala media is filled with endolymph. At the base of the cochlea, the scala vestibuli ends at the oval window, while the scala tympani terminates at the round window which opens to the middle ear. The organ of Corti is a structure located on the basilar membrane which contains hair cells that act as auditory receptors. The hair cells are present in rows on the internal side of the organ of Corti. The basal end of the hair cell is in close contact with the afferent nerve fibres. A large number of processes called stereo cilia are projected from the apical part of each hair cell. Above the rows of the hair cells is a thin elastic membrane called tectorial membrane.
• The inner ear also contains a complex system called vestibular apparatus, located above the cochlea. The vestibular apparatus is composed of three semi-circular canals and the otolith (macula is the sensory part of saccule and utricle). Each semi-circular canal lies in a different plane at right angles to each other. The membranous canals are suspended in the perilymph of the bony canals. The base of canals is swollen and is called ampulla, which contains a projecting ridge called crista ampullaris which has hair cells. The saccule and utricle contain a projecting ridge called macula. The crista and macula are the specific receptors of the vestibular apparatus responsible for maintenance of balance of the body and posture.