1.A magnetic compass needle is placed in the plane of paper near point A as shown in figure. In which plane should a straight current carrying conductor be placed so that it passes through A and there is no change in the deflection of the compass? Under what condition is the deflection maximum and why?

2. Under what conditions permanent electromagnet is obtained if a current carrying solenoid is used? Support your answer with the help of a labelled circuit diagram.
Answer. Required conditions are:
(i) The magnitude of direct current through the solenoid should be large.
(ii)The number of turns in the solenoid should be large and closely packed, so that a strong uniform magnetic field inside it is produced.
(iii) The rod kept inside is made of a magnetic material such as steel.

3.AB is a current carrying conductor in the plane of the paper as shown in figure. What are the directions of magnetic fields produced by it at points P and Q? Given r1  >  r2, where will the strength of the magnetic field be larger? 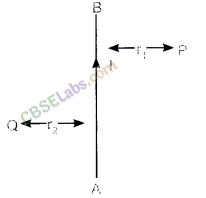 4.It is established that an electric current through a metallic conductor produces a magnetic field around it. Is there a similar magnetic field produced around a thin beam of moving (i) alpha particles, (ii) neutrons? Justify your answer.
Answer.
(i) Yes, similar magnetic field is produced around a thin beam of moving a-particle. a-particle being positively charged constitutes a current in the direction of beam motion.
(ii) No, neutron being electrically neutral, does not constitute a current.