In general, a Function is a kind of relation in which each element in the domain is paired with only one element in the range. To help you understand the concept of Functions or Mapping we have provided a detailed explanation along with solved examples. Mapping Diagram consists of two columns in which the first column denotes the domain and the second column denotes the range.

Introduction to Mapping or Function

Let us assume there are two sets A and B and the relation between Set A to Set B is called the function or Mapping.

For f to be Mapping from A to B

Different Elements of A can have the Same Image in B. Thus, the following figure represents Mapping. 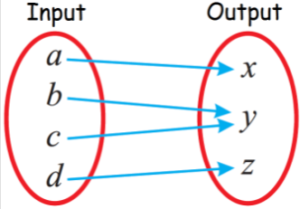 No element of A should have more than one image. The below figure doesn’t represent mapping since the element in Set A is having two images i.e. I, III. 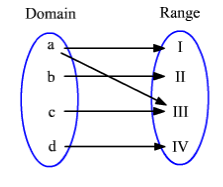 Every element of A must have an Image in Set B. The adjacent figure doesn’t represent mapping since 1, 2 are not associated with the elements in Set B.

Thus, we can infer that every mapping is a relation but not every relation is mapping.

Function as a Special Kind of Relation

Suppose A and B are two non-empty sets then rule f associates each element of A with a unique element in B is known as function or mapping from A to B.

where x is the pre-image of y.

Therefore, For a function from A to B.

How to Identify Functions from Mapping Diagrams?

A Mapping Diagram represents a function if each input value is paired with only one output value. 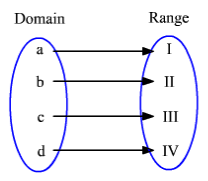