Imaginary Numbers
The square root of a negative real number is called an imaginary number, e.g. √-2, √-5 etc.
The quantity √-1 is an imaginary unit and it is denoted by ‘i’ called Iota.

Complex Number
A number of the form x + iy, where x and y are real numbers, is called a complex number, x is called real part and y is called imaginary part of the complex number i.e. Re(Z) = x and Im(Z) = y.

Division of Complex Numbers
Let z1 = x1 + iy1 and z2 = x2 + iy2 be any two complex numbers, then their division is defined as Properties of Modulus of a Complex number 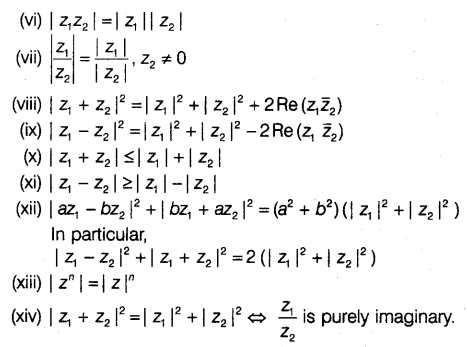 Argument of a complex Number
The angle made by line joining point z to the origin, with the positive direction of X-axis in an anti-clockwise sense is called argument or amplitude of complex number. It is denoted by the symbol arg(z) or amp(z).
arg(z) = θ = tan-1(\(\frac { y }{ x }\)) 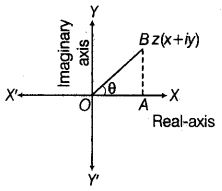 Square Root of a Complex Number

Solution of a Quadratic Equation
The equation ax2 + bx + c = 0, where a, b and c are numbers (real or complex, a ≠ 0) is called the general quadratic equation in variable x. The values of the variable satisfying the given equation are called roots of the equation.