It could gain four electrons forming C4- cation. But it would be difficult for the nucleus with six protons to hold on to ten electrons.

Thus, carbon overcomes this problem by sharing of its valence electrons with other carbon atoms or with atoms of other elements.

The bond formed by mutual sharing of electron pairs between two atoms in a molecule is known as Covalent Bond.

Electron Dot Structure: The electron dot structures provides a picture of bonding in molecules in terms of the shared pairs of electrons and octet rule. 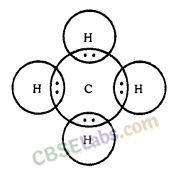 Allotropes of Carbon
Allotropy: The phenomenon in which the element exists in two or more different physical states with similar chemical properties are called Allotropy.

Versatile Nature of Carbon: The existence of such a large number of organic compounds is due to the following nature of carbon,

(i) Catenation: The self linking property of an element mainly carbon atom through covalent bonds to form long straight, branched and rings of different sizes are called Catenation.
This property is due to

Carbon can also form stable multiple bonds (double or triple) with itself and with the atoms of other elements.
Straight Chain 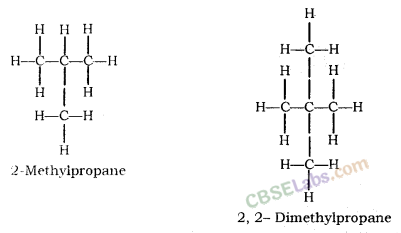 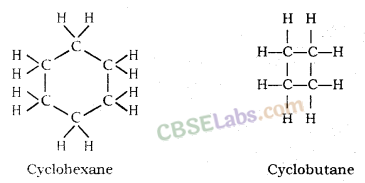 (ii) Tetravalent Nature: Carbon has valency of four. It is capable of bonding with four other atoms of carbon or some other heteroatoms with single covalent bond as well as double or triple bond.

Saturated Hydrocarbon (Alkanes): General formula is CnH2n+2.
n = number of carbon atoms.
In this, the carbon atoms are connected by only a single bond.
For example; Methane (CH4), Ethane (C2H6) etc.

Unsaturated Hydrocarbons
Alkenes: General formula is CnH2n, where n = number of carbon atoms.
In this, the two carbon atoms are connected by double bond.

Alkynes: General formula is CnH2n-2, where n = number of carbon atoms. In this, the two carbon atoms are connected by triple bond.

Isomerism: Compounds having the same molecular formula but different structural formula and properties are known as Isomers and this phenomenon is known as Isomerism.

Homologous Series: Series of organic compounds having the same functional group and chemical properties and successive members differ by a CH2 unit or 14 mass units are known as Homologous series.

Nomenclature of Organic Compounds: It is difficult to remember millions of compounds by their individual common name. Thus, to systematize the nomenclature of organic compounds IUPAC (International Union of Pure and Applied Chemistry) has given certain rule which is as follows:
1. Identify the Number of Carbon Atoms in the Compound

In presence of limited supply of air, saturated hydrocarbon forms a sooty flame.

3. Addition Reaction: Addition of dihydrogen with unsaturated hydrocarbon in the presence of catalysts such as nickel or platinum or palladium are known as Hydrogenation (addition) reaction.

Catalyst: Substances that cause a reaction to occur or proceeds to different rate without consuming in it are called a catalyst. For example; Ni, Pt, Pd, etc.

Vegetable fats are saturated fats which are harmful for health.

Dehydrating agent: Substances which removes water from ethanol (alcohols) is known as Dehydrating agent. For example; Cone. H2SO4.
Uses: As solvent, as antiseptic (tincture iodine), as anti-freeze in automobiles.

Ethanoic Acid (CH3COOH): Commonly known as Acetic acid. 5-8% of ethanoic acid in water is called Vinegar. The melting point of pure ethanoic acid is 290 K and hence, it often freezes in cold climate so named as glacial acetic acid.

Chemical Properties
(i) Esterification Reaction: Reaction of ethanoic acid with an alcohol in the presence of a few drops of conc. H2SO4 as catalyst gives a sweet-smelling substance known as Esters, called Esterification reaction.

Esters are used in making perfumes and flavouring agents.

Difference between soaps and detergents

Advantage of Detergents: The main advantage of detergent over soaps is that soaps cannot be used in hard water for washing because hard water reacts with soap to form curdy white precipitate called Scum.

Thus, in hard water, soap does not give lather while detergent does.

Cleansing Action of Soaps and Detergents: Both soaps and detergents cantains two parts. A long hydrocarbon part which is hydrophobic (water repelling) in nature and a short ionic part which is hydrophillic (water attracting) in nature.
The hydrocarbon part of the soap molecule links itself to the oily (dirt) drop and ionic end orients itself towards water and forms a spherical structure called micelles. The soap micelles helps in dissolving the dirt in water and wash our clothes. Covalency: The number of electrons contributed by each atom for sharing.

Carbon always forms a covalent bond: Atomic no of carbon is 6. So, its configuration is K-2, L-4. Therefore, it should either lose or gain 4 electrons to achieve the noble gas configuration and become stable.
However, it is difficult for carbon to gain or lose four electrons because of the following reasons:

Hydrocarbon: Organic compounds of carbon and hydrogen are called hydrocarbons.

Saturated Compound: Compounds of carbon which have only single bonds between the carbon atoms are called saturated compounds e.g., Ethane, Propane, Butane etc.

Homologous series: A family of organic compounds having the same functional group, similar chemical properties and the successive (adjacent) members differ by a CH2 unit or 14 mass unit.

(ii) If the structure has a branched chain, identify the longest chain and then identify the number of carbon atoms. When the surface of the cloth is mechanically scrubbed or beaten on a stone or with a wooden paddle or agitated in a washing machine, the loosened oily particle is removed from the dirty surface and the cloth is cleaned. Detergents lower the surface tension of water to a greater extent than soap, therefore the cleansing action of detergent is much higher than those of soaps.

1. The earth’s crust has only 0.02% carbon in the form of minerals (like carbonates^bicarbonates, coal, and petroleum).

3. In spite of its small amount available in nature, carbon is a versatile element as it forms the basis for all living organisms and many things which we use. 6. Fullerenes: A new category of carbon allotrope, fullerenes are spherical in shape or a soccer ball like. The first fullerene identified was C-60 with 60 carbon atoms arranged like the geodesic dome designed by US architect, Buckminster Fuller, hence these are also known as Buckminster Fullerenes or Bucky Ball structures. (b) Tetracovalency: Due to small size, and presence of four valence electrons, carbon can form strong bonds with other carbon atoms, hydrogen, oxygen, nitrogen, or sulphur, etc. For example, compounds of carbon with hydrogen are called hydrocarbons.

(c) Multiple Bond Formation : Small size of carbon also enables it to form multiple bonds, (i.e., double bonds or triple bonds) with other elements as well as with its own atoms. This increases the number of carbon compounds.
Note:

(d) Isomerism: The phenomenon by means of which the carbon compounds with same molecular formula show different structures, and properties, e.g., A chain of 4 carbon atoms can be written in two ways :

Hence, the number of carbon compounds increases to a huge number.

8. Hydrocarbons: a Large number of hydrocarbons can be classified as: Note: In an open chain, the name of parent chain is derived from the root word and suffix ane, ene or yne is added depending on the type of bond present in a chain : Important: No alkene or alkyne is possible with single carbon atom because double or triple bond is not possible between carbon and hydrogen atom. It is only between two carbon atoms.

Important: Replacement of hydrogen atom by a functional group is always in such a manner that valency of carbon remains satisfied. Note : Cl is named as prefix Chloro; Br as Bromo; NH2 as Amino and N02 as Nitro.
Important Note: Symbol ‘R’ in a formula represents an Alkyl Group which is formed by the removal of one hydrogen atom from an alkane.

10. Homologous series: A series of organic compounds in which every succeeding member differs from the previous one by -CH2 group or 14 a.m.u.
Note : As the molecular mass increases in a series, : so physical properties of the compounds
show a variation, but chemical properties which are determined solely by a functional group, remains same within a series.

(a) Combustion Reaction: A chemical reaction in which a substance burns in the presence of air or oxygen is called combustion reaction.
Note: Combustion is always an EXOTHERMIC reaction, e.g.,

(b) Oxidation Reaction: The addition of oxygen in a compound upon combustion is called oxidation.
In addition to combustion, oxidation can also be : brought about by some substances which are
capable of giving oxygen to others, i.e., Oxidising agents, e.g., Acidified K2Cr207 (Potassium dichromate) and alkaline KMn04 (Potassium permanganate).
Note:

(c) Addition Reaction: Addition of a molecule in unsaturated compounds in the presence of a catalyst, to give saturated compound is called an addition reaction, e.g.,
Hydrogenation of vegetable oils as shown in the reaction below :

(d) Substitution Reaction: The reactions which involve the replacement of an atom or group of atoms from a molecule by another atom without any change in structure in the remaining part of the molecule.

13. Ethanol: (or alcohol)
Colourless liquid, soluble in water, and has a distinct smell and burning taste. Its consumption in small quantities causes drunkenness and can be lethal. Saponification : Esters in the presence of acid or base react to give back alcohol and carboxylic acid is called saponification.

15. Soaps and Detergents :
Soaps and Synthetic Detergents: Soaps and detergents are substances used for cleaning.
Soap: Soaps are sodium or potassium salts of higher fatty acids, such as Oleic acid (C17H33COOH), Stearic acid (C17H35COOH), Palmitic acid (C15H31COOH), etc. These acids are present in the form of their esters along with glycerol (alcohol containing three hydroxyl groups). These esters, called ‘glycerides’ are present in fats and oils of animal and vegetable origin.
Preparation of Soap: When an oil or fat (glyceride) is treated with sodium hydroxide solution, it gets converted to sodium salt of the acid (soap) and glycerol. The reaction is known as saponification. When soap or detergent is dissolved in water, the molecules gather together as clusters, called micelles. The tails stick inwards and the heads outwards.
In cleansing, the hydrocarbon tail attaches.itself to oily dirt. When water is agitated, the oily dirt tends to lift off from the dirty surface and dissociates into fragments. This gives an opportunity to other tails to stick to oil. The solution now contains small globules of oil surrounded by detergent molecules. The negatively charged heads present in water prevent the small globules from coming together and form aggregates. Thus, the oily dirt is removed from the object.

16. Scum: The insoluble precipitates formed by soap molecule when they react with calcium and magnesium ions present in hard water. Due to this, a lot of soap gets wasted and cleansing action gets reduced to a larger extent.