Question 3:
23 g of salt is dissolved in 100 g of water at 293 K. What is the concentration of solution at this temperature ?
Answer:

Question 4:
(a) When observed under microscope, small pores here and there in the epidermis of the leaf are seen. What are these pores called ? Write two functions of these pores.
(b) Name the simple permanent tissue which :
(i) forms the basic packing tissue.
(ii) provides flexibility in plants.
Answer:
(a) • These pores are called stomata.
• These pores help in exchange of gases and in transpiration.
(b) (i) Parenchyma,
(ii) Collenchyma.

Question 5:
Give two applications based on the concept of pressure.
Answer:
(i) Tyres of heavy vehicles are wide.
(ii) The strap of bags are wide.

Question 7:
From where does the term Echinoderma originate ? Mention two animals belonging to Echinodermata.

(a) Why was the need to write scientific names for organisms ? Who introduced the system of scientific naming ?
(b) What are the two Latin forms in a scientific name of an organism ?
Answer:
In Greek, echinos means hedgehog, and derma means skin. Thus, echinodermates are spiny
skinned organisms.
e.g., Antedon (feather star), Asterias (star fish), Holothuria (sea cucumber).

(a) Because it would be difficult for people speaking or writing in different languages to know when they are talking about the same organism. This problem was resolved by agreeing upon a ’scientific’ name for organisms which is unique and can be used to identify an organism anywhere in the world. The system of scientific naming or nomenclature was introduced by Carious Linnaeus in the eighteenth century.
(b) A generic name and a specific name are the two Latin forms in a scientific name of an organism.

Question 8:
(a) Mention four characteristic features of the cells of meristematic tissue.
(b) Which elements of xylem :
(i) help in transport of water and minerals,
(ii) store food, and
(iii) provide mechanical support ?
Answer:
(a)
(i) Meristematic tissue consists of repeatedly dividing cells.
(ii) The cell wall of these cells are thin.
(iii) Vacuoles are not found in these cells.
(iv) The protoplasm of these cells are very dense.
(b)
(i) Tracheids and vessels,
(ii) Xylem parenchyma,
(iii) Xylem fibres.

Question 10:
What is velocity-time graph ? State how it can be used to find:
(i) the acceleration of a body,
(ii) the displacement of the body,
(iii) the distance travelled in a given time.
Answer:
In the velocity-time graph, time is taken on the x-axis velocity is taken along the y – axis.
(i) Since acceleration = change in velocity/time, therefore, the slope of the velocity¬time graph gives the acceleration. If the slope is positive, it is accelerated motion and if the slope is negative, the motion is retarded.
(ii) Since velocity x time = displacement. The area enclosed above the time axis represents positive displacement and the area enclosed below the time axis represents negative displacement. The total displacement is obtained by adding them numerically with proper sign.
(iii) The total distance travelled by the body is their arithmetic sum (without sign).

Question 11:
Calculate the ratio of momentum, when :
(i) velocity of an object is doubled.
(ii) mass of an object is halved.
(iii) both mass and velocity are increased by three times.
Answer:
Let a body of mass m is moving with velocity.
Then its momentum, pi – mv 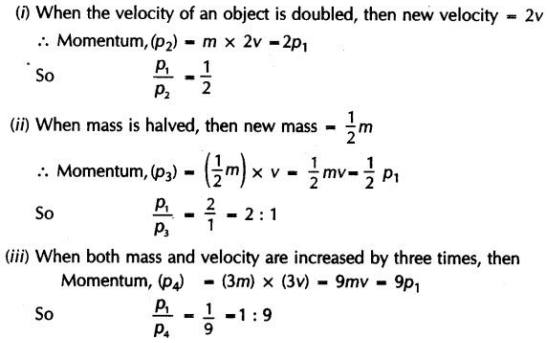 Question 13:
Waves of frequency 150 Hz are produced in a string. Find the :

Question 16:
(a) Differentiate between bone and cartilage with respect to structure, function and location,
(b) (i) Why is connective tissue called so ?
(ii) What is the function of the areolar connective tissue?
(iii) Which substance is present in the adipocytes ? How does it help ?
Answer:

(b) (i) These tissues serve the functions of binding and joining one tissue to another, provide support and help packing together different organs of the body.
(ii) Areolar tissue fills the space inside the organs, supports internal organs and helps in repair of tissues.
(iii)
• Adipocytes are fat storing tissues.
• These tissues are found below the skin and between internal organs.
• The cells of this tissue are filled with fat globules.
• They act as insulator because they store fats.

Question 17:
Compare in tabular form the properties of solids, liquids and gases with respect to :
(i) Volume
(ii) Diffusion
(iii) Fluidity or Rigidity
(iv) Shape
(v) Kinetic energy of particles at a given temperature
Answer:

Question 18:
Define the following terms :
(a) Atom
(b) Molecule
(c) Avogadro’s number
(d) Mole s
(e) Molar mass
Answer:
(a) An atom is the smallest particle of an element that can exist independently and retain all its chemical properties.
(b) A molecule is the smallest particle of an element or a compound capable of independent existence under ordinary conditions. It shows all the properties of the substance.
(c) The number of particles (atoms, molecules or ions) present in 1 mole of any substance is fixed, with a value of 6.022 x io23. This number is called the Avogadro number or Avogadro constant (represented by No). This is an experimentally obtained value.
(d) The mole is the amount of substance that contains the same number of particles (atoms/ions/ molecules/formula units, etc.), as there are atoms in exactly 12 g of carbon-12.
(e) Mass of 1 mole of a substance is called its molar mass, e.g., 12 g of carbon is its molar mass.

Question 19:
Give the appropriate term for each of the following:
(a) complex sugar that makes the fungal cell wall.
(b) naked seeds.
(c) blue-green algae.
(d) basic unit of classification.
(e) group of unicellular eukaryotic organisms.
Answer:
(a) Chitin
(b) Gymnosperms i
(c) Cyanobacteria
(d) Species
(e) Protista 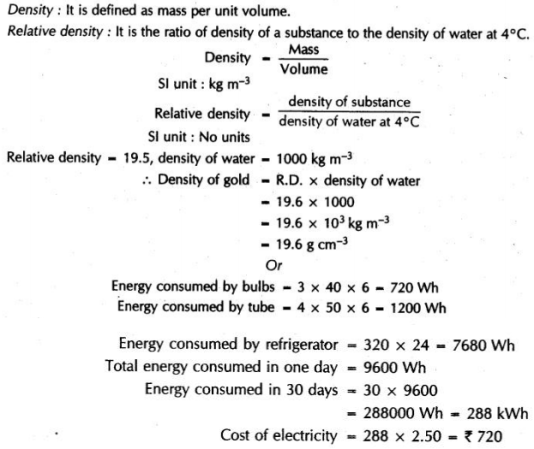 Question 23:
Write the procedure you need to follow for preparing a solution of starch in water. State the precaution which is most important and one must follow essentially. Answer:
(i) Procedure:
(1) Taken water in a beaker and mixed some starch in it.
(2) Stirred the mixture gradually, using glass rod.
(3) Left the mixture undisturbed for sometime.
(ii) Precaution:
For making starch solution, always distilled water should be used.

Question 24:
Mention the four sequential steps of procedure required to calculate the percentage of water absorbed by raisins in the laboratory.
Answer:
(i) Find the initial weight of raisins.
(ii) Keep the raisins in a petri dish for 2-3 hours so that they absorb water and swell up.
(iii) Wipe water on the outer surface of raisins and weigh them.
(iv) Find the percentage of water absorbed by raisins by using formula:

Question 25:
A student observed that a block of mass 100 g displaced 50 mL of water when dipped in measuring cylinder. Calculate the density of the block.
Answer:
Mass of block = 100 g
Volume of block = 50 mL = 50 cm³

Question 26:
A student uses a spring balance of least count 10 g and range 500 g. He records the weight of a small lead sphere in air, in tap water and in a concentrated solution of salt water respectively. If the readings are in order Wu W2 and W3. Write the relation between them with reason.
Answer:
W1 > W2 > W3

Question 27:
(a) Which feature of the body design helps a fish to swim in water ?
(b) How many gills are present in a bony fish ?
Answer:
(a) Streamlined body.
(b) The vast majority of bony fish have 5 pairs, and a few have 6 or 7 pairs.