Ex 5.1 Class 9 Maths Question 1.
Which of the following statements are true and which are false? Give reasons for your answers.
(i) Only one line can pass through a single point.
(ii) There are an infinite number of lines which pass through two distinct points.
(iii) A terminated line can be produced indefinitely on both the sides.
(iv) If two circles are equal, then their radii are equal.
(v) In figure, if AB – PQ and PQ = XY, then AB = XY.

Solution:
(i) False
Reason : If we mark a point O on the surface of a paper. Using pencil and scale, we can draw infinite number of straight lines passing
through O. (iii) True
Reason: The postulate 2 says that “A terminated line can be produced indefinitely.”

(iv) True
Reason : Superimposing the region of one circle on the other, we find them coinciding. So, their centres and boundaries coincide.
Thus, their radii will coincide or equal.

(v) True
Reason : According to Euclid’s axiom, things which are equal to the same thing are equal to one another.

Ex 5.1 Class 9 Maths Question 2.
Give a definition for each of the following terms. Are there other terms that need to be defined first? What are they and how might you define them?
(i) Parallel lines
(ii) Perpendicular lines
(iii) Line segment
(iv) Radius of a circle
(v) Square
Solution:
Yes, we need to have an idea about the terms like point, line, ray, angle, plane, circle and quadrilateral, etc. before defining the required terms.
Definitions of the required terms are given below:

(i) Parallel Lines:
Two lines l and m in a plane are said to be parallel, if they have no common point and we write them as l ॥ m.

(ii) Perpendicular Lines:
Two lines p and q lying in the same plane are said to be perpendicular if they form a right angle and we write them as p ⊥ q. 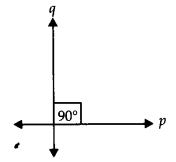 (v) Square :
A quadrilateral in which all the four angles are right angles and all the four sides are equal is called a square. Given figure, PQRS is a square.

Ex 5.1 Class 9 Maths Question 5.
In question 4, point C is called a mid-point of line segment AB. Prove that every line segment has one and only one mid-point.
Solution:
Let the given line AB is having two mid points ‘C’ and ‘D’.

Ex 5.2 Class 9 Maths Question 2.
Does Euclid’s fifth postulate imply the existence of parallel lines ? Explain.
Solution:
Yes. If a straight line l falls on two lines m and n such that sum of the interior angles on one side of l is two right angles, then by Euclid’s fifth postulate, lines m and n will not meet on this side of l. Also, we know that the sum of the interior angles on the other side of the line l will be two right angles too. Thus, they will not meet on the other side also.

∴ The lines m and n never meet, i.e, They are parallel.