Question 6.4.The potential energy function for a particle executing linear simple harmonic motion is given by V (x) – kx2/2, where k is the force constant of the oscillator. For k = 0.5 Nm-1 , the graph of V (x) versus x is shown in Fig. Show that a particle of total energy 1 J moving under this potential must ‘turn back’ when it reaches x = ± 2 m. 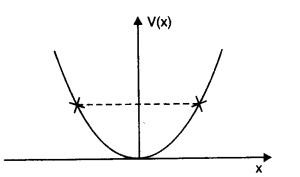 Answer: Here, force constant k = 0.5 Nm-1 and total energy of particle E = 1J. The particle can go up to a maximum distance xm, where its total energy is transformed into elastic potential energy.

Question 6. 5. Answer the following:
(a) The casing of a rocket in flight bums up due to friction. At whose expense is the heat energy required for burning obtained? The rocket or the atmosphere?
(b) Comets move around the sun in highly elliptical orbits. The gravitational force on the comet due to the sun is not normal to the comet’s velocity in general. Yet the work done by the gravitational force over every complete orbit of the comet is zero. Why?
(c) An artificial satellite orbiting the earth in very thin atomosphere loses its energy gradually due to dissipation against atmospheric resistance, however small. Why then does its speed increase progressively as it comes closer and closer to the earth?
(d) In Fig.(i), the man walks 2 m carrying a mass of 15 kg on his hands. In Fig. (ii), he walks the same distance pulling the rope behind him. The rope goes over a pulley, and a mass of 15 kg hangs at its other end. In which case is the work done greater?

Answer: (a) Heat energy required for burning of casing of rocket comes from the rocket itself. As
a result of work done against friction the kinetic energy of rocket continuously decreases – and this work against friction reappears as heat energy.
(b) This is because gravitational force is a conservative force. Work done by the gravitational ‘ force of the sun over a closed path in every complete orbit of the comet is zero.
(c)  As an artificial satellite gradually loses its energy due to dissipation against atmospheric resistance, its potential decreases rapidly. As a result, kinetic energy of
satellite slightly increases i.e., its speed increases progressively.
(d) In Fig. (i), force is applied on the mass, by the man in vertically upward direction but distance is moved along the horizontal.
θ = 90°. W = Fs cos 90° = zero
In Fig. (ii), force is applied along the horizontal and the distance moved is also along the horizontal. Therefore, θ = 0°.
W = Fs cos θ = mg x s cos 0°
W = 15 x 9.8 x 2 x 1 = 294 joule.
Thus, work done in (ii) case is greater.

Question 6. 10. A body is moving unidirectionally under the influence of a source of constant power. Its displacement in time t is proportional to (i) t1/2 (ii) t (iii) t3/2 (iv) t2
Answer: (ii)p = force x velocity

Question 6. 11. A body constrained to move along the z-axis of a coordinate system is subject to a constant force F given by

where i, j, k, are unit vectors along the x- y- and z-axis of the system respectively. What is the work done by this force in moving the body a distance of 4 m along the z-axis?
Answer:

Question 6. 14. A molecule in a gas container hits a horizontal wall with speed 200 msA and angle 30° with the normal, and rebounds with the same speed. Is momentum conserved in the collision? Is the collision elastic or inelastic?
Answer:  Let us consider the mass of the molecule be m and that of wall be M. The wall remains at rest due to its large mass. Resolving momentum of the molecule along x-axis and y-axis, we get
The x-component of momentum of molecule Question 6. 16. Two identical ball bearings in contact with each other and resting on a friction less table are hit head-on by another ball bearing of the same mass moving initially with a speed V. If the collision is elastic, which of the following (Fig.) is a possible result after collision? Question 6.17. The bob A of a pendulum released from 30° to the vertical hits another bob B of the same mass at rest on a table as shown in Fig. How high does the bob A rise after the collision? Neglect the size of the bobs and assume the collision to be elastic.
Answer: Since collision is elastic therefore A would come to rest and B would begin to move with the velocity of A. The bob transfers its entire momentum to the ball on the table. The bob does not rise at all.

Question 6. 18. The bob of a pendulum is released from a horizontal position. If the length of the pendulum is 1.5 m, what is the speed with which the bob arrives at the lowermost point, given that it dissipated 5% of its initial energy against air resistance?
Answer:  On releasing the bob of pendulum from horizontal position, it falls vertically downward by a distance equal to length of pendulum i.e., h = l = 1.5 m .
As 5% of loss in P.E. is dissipated against air resistance, the balance 95% energy is transformed into K.E. Hence,

Question 6. 19. A trolley of mass 300 kg carrying a sandbag of 25 kg is moving uniformly with a speed of 27 km/h on a friction less track. After a while, sand starts leaking out of a hole on the trolley’s floor at the rate of 0.05 kg s-1. What is the speed of the trolley after the entire sand bag is empty?
Answer:  The system of trolley and sandbag is moving with a uniform speed. Clearly, the system is not being acted upon by an external force. If the sand leaks out, even then no external force acts. So there shall be no change in the speed of the trolley.

Question 6. 21. The blades of a windmill sweep out a circle of area A. (a) If the wind flows at a velocity v perpendicular to the circle, what is the mass of the air passing through it in time t? (b) What is the kinetic energy of the air? (c) Assume that the windmill converts 25% of the wind’s energy into electrical energy, and that A = 30 m2, v = 36 km/h and the density of air is 1.2 kg m-3 . What is the electrical power produced?
Answer: (a) Volume of wind flowing per second = Av Mass of wind flowing per second = Avρ
Mass of air passing in second = Avρt Question 6. 25. Two inclined frictionless tracks, one gradual and the other steep meet at A from where two stones are allowed to slide down from rest, one on each track (Fig). Will the stones reach the bottom at the same time? Will they reach there at the same speed? Explain. Given θ1 = 30°, θ2 = 60°, and h = 10 m, what are the speeds and times taken by the two stones? Question 6. 26. A 1 kg block situated on a rough incline is connected to a spring with spring constant 100 Nm-1 as shown in Figure. The block is released from rest with the spring in the unstretched position. The block moves 10 cm down the incline before coming to rest. Find the coefficient of friction between the block and the incline. Assume that the spring has negligible mass and the pulley is frictionless. Question 6. 27. A bolt of mass 0.3 kg falls from the ceiling of an elevator moving down with a uniform speed of 7 ms-1. It hits the floor of the elevator (length of elevator = 3 m) and does not rebound. What is the heat produced by the impact? Would your answer be different if the elevator were stationary?
Answer:  P.E. of bolt = mgh = 0.3 x 9.8 x 3 = 8.82 J
The bolt does not rebound. So the whole of the energy is converted into heat. Since the value of acceleration due to gravity is the same in all inertial system, therefore the answer will not change even if the elevator is stationary.

Question 6.29. Which of the following potential energy curves in Fig. cannot possibly describe the elastic collision of two billiard balls? Here r is distance between centres of the balls. Answer: The potential energy of a system of two masses varies inversely as the distance (r) between 1
them i.e., V (r) α 1/r. When the two billiard balls touch each other, P.E. becomes zero i.e., at r = R + R = 2 R; V (r) = 0. Out of the given graphs, curve (v) only satisfies these two conditions. Therefore, all other curves cannot possibly describe the elastic collision of two billiard balls.

Question 6. 30. Consider the decay of a free neutron at rest: n > p + e–. Show that the two body decay of this type must necessarily give an electron of fixed energy, and therefore, cannot account for the observed continuous energy distribution in the β -decay of a neutron or a nucleus, Fig. Thus, it is proved that the value of v2 is fixed since all the quantities in right hand side are constant. It establishes that the emitted electron must have a fixed energy and thus we cannot account for the continuous energy distribution in the β-decay of a neutron.