1. Photoelectric Effect The phenomenon of emission of photoelectron from the surface of metal, when a light beam of suitable frequency is incident on it, is called photoelectric effect. The emitted electrons are called photoelectrons and the current so produced is called photoelectric current.
Hertz’ Observation The phenomenon of photo electric emission was discovered in 1887 by Heinrich Hertz during his electromagnetic wave experiment. In his experimental investigation on the production of electromagnetic waves by means of spark across the detector loop were enhanced when the emitter plate was illuminated by ultraviolet light from an arc lamp.
Lenard’s Observation Lenard observed that when ultraviolet radiation were allowed to fall on emitter plate of an evacuated glass tube enclosing two electrodes, current flows. As soon as, the ultraviolet radiations were stopped, the current flows also stopped. These observations indicate that when ultraviolet radiations fall on the emitter plate, electrons are ejected from it which are attracted towards the positive plate by the electric field.
2. Terms Related to Photoelectric Effects
There are many terms related to photoelectric effects which are of follow:
(i) Free Electrons In metals, the electrons in the outer shells (valence electrons) are loosely bound to the atoms, hence they are free to move easily within the metal surface but cannot leave the metal surface. Such electrons are called free electrons.
(ii) Electron Emission The phenomenon of emission of electrons from the surface of a metal is called electron emission.
(iii) Photoelectric Emission It is the phenomenon of emission of electrons from the surface of metal when light radiations of suitable frequency fall on it.
(iv) Work Function The minimum amount of energy required to just eject an electron from the outer most surface of metal is known as work function of the metal.

(v) Cut-off Potential For a particular frequency of incident radiation, the minimum negative (retarding) potential V0 given to plate for which the photoelectric current becomes zero, is called cut-off or stopping potential. 4. Effect of Potential on Photoelectric Current For a fixed frequency and intensity of incident light, the photoelectric current increases with increase in the potential applied to the collector. When all the photoelectrons reach the plate A, current becomes maximum it is known as saturation current.

5. Effect of Frequency of Incident Radiation on Stopping Potential We take radiations of different frequencies but of same intensity. For each radiation, we study the variation of photoelectric current against the potential difference between the plates. 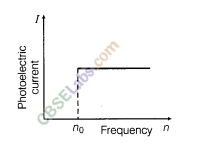