Three words—a, an and the are called articles. They are divided in two groups. 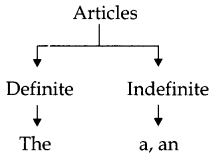 A. The Definite Article (The)
1. Use of Definite Article
(a) Put the before the words which mean the inhabitants of a country.
The English live in England and the Indians in India.
But do not put the before the names of the language.
English is spoken in England and Hindi in India.
Exception
Plural nouns of a country’s inhabitants do not take the if they are thought of individually.
Indians are generally vegetarians.
Russians drink vodka.

(c) Use the before the names of rivers, canals, seas, oceans, valleys, deserts and forests :
Lucknow is on the Gomati. (not on GomatQ
Similarly we say—
The North Sea, The Indian Ocean, The Ganges, The Sahara

(d) Use the before the names of ships and trains :
The Rajdhani Express runs fast.
The Titanic was a very big ship.
But do not use the before the vehicles when they indicate a means of transport :
I will go to Delhi by bus.
We are going to Mumbai by train.

2. Omission of the Definite Article
(a) Do not put the before the names of substances if they are used in a general sense.
Gold is a precious metal. (not the golf)
Bread is made from flour. (not the bread … the flour)
Lead is very heavy. (not the lead)
But the must be used if the reference is to a particular kind or type.
The thieves stole the gold from that ship.
The bread in this hotel is of poor quality.

(b) Do not put the before the names of meals if they refer to the meals generally.
When do you have dinner ?
Have you had breakfast ?
Lunch is at 2.00 p.m.
But use the when the meal is a particular one.
The dinner will be taken at Ashoka.
We enjoyed the lunch given by the school.

(c) Do not use the before plural nouns when they are used in a general sense.
Books are necessary for students.
Apples grow in Simla.
Cars can run fast.

(d) Do not use the before the names of games.
Sania Mirza plays Tennis.
Chess is a game which requires skill.

(e) Do not put the before the names of the countries unless the name denotes that it is made of parts.
India, Italy, France and China are all republics.
But
The United States is very rich.
The U.S.S.R. has broken into smaller units.

(b) If a word begins with a vowel but is pronounced in the way as ‘y’ in yet, write a and not an before it.
a university, a European.

(d) Use a after the word such when it is applied to things which are countable.
I have never known such a cold winter.
Such a thing has never happened before.

(e) If instead of such, there is the word so, then put a after the adjective, just before the noun.
I have never known so cold a winter.   (not a so cold winter)

Read the statements given below and tick the correct option :
I. Identify as directed :
Question 1.
Identify the definite article
(i) a
(ii) an
(iii) the
(iv) it