Question 1.
Read the following extract from an article in a magazine and then using your own ideas, write an article for your school magazine on the Delights and Usefulness of Walking.
Walking has its own delights. Sadly, in India walking is associated with deprivation and poverty. “If you have a car, why walk ?” asked the professor, revving up his Maruti for the few metres from his house to the college build¬ing. Pavements and pedestrians get second class treatment.’
Answer:
Delights and Usefulness of Walking
Walking is a pleasure. When we are in a vehicle, our attention is fixed on the road. There is no time to spare for the things on either side of the road. A walker can, however, enjoy the sights on either sides. If he so likes, he can change his speed. He can walk slowly when there is much beauty around. He can go fast when he wants his walking to be an exercise for the limbs. However, no young person should walk thinking that it is an exercise. It will kill all the pleasure. Moreover, there are many other exercises that are good for health. Walking should be made a habit for enjoyment. One should feel relaxed and not tired after a good walk. We should walk only when the weather is fine. We should avoid walking when it is hot or misty.

Question 2.
Gauri sees the following scene as he looks out of his bedroom window. He is alarmed at the way his city has changed in the past five years. He writes an article for his city newspaper expressing his alarm and painting the present position cautioning people against environmental pollution. Write that arti¬cle considering yourself to be Garni. 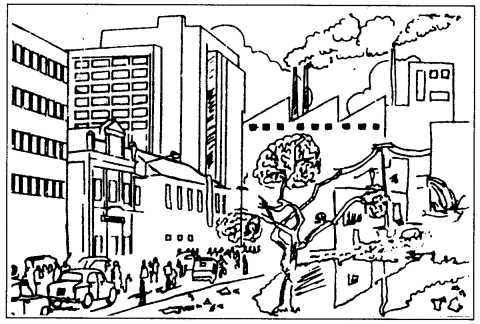 Pollution
Or
The Traffic on the Road

Our cities are changing very fast. My father tells me there were no traffic jams in our city ten years before. Then no body found it difficult to cross the road. Today, the roads are better and wider but crossing them is always dangerous. The traffic jams have become common. There are few trees and in the evening the smoke envelopes the city. It is not easy to breathe in the polluted air. It is all due to the vehicles on the road. There are more cars than the city roads can accommodate. As a result breathing diseases such as asthma have become very common. Something must be done to lessen the number of vehicles on the road.

Question 3.
Write a letter to the Editor, Jan Jagriti, Surat registering your protest against government/local body’s apathy towards cleanliness in the city during the days of reported outbreak of plague in the city and migration of people to the neighbouring centres/State. Look at the picture below and write your letter. Answer:
The Editor
Jan Jagriti
Surat
3 March, 2007 Sir
Through your newspaper. I wish to draw the attention of the authorities towards my city. The city seems to have become a dustbin. The sweepers sweep the roads but leave the garbage on the sides. This garbage lies there for weeks. The pigs and such other animals can be seen feasting on it. Stray dogs are a worse nuisance. They do not bark but bite. Many people have suffered because of them. There are open drains in many parts of the city. These drains are almost always choked. So the dirty water flows on the road making the air foul-smelling.
I urge the concerned authorities to take immediate steps to clean all garbage. The drains must at once be cleaned. In short, the city must be made clean at once.
Yours faithfully
ABC

Question 4.
Read the following swnmary of a study conducted titled The Impact of Television Advertising on Children. Then based on the information in the summary and your own ideas on the subject, write an article for the school magazine titled Children and T.V. Advertising.

One Year Out of Ten is Spent
Watching Tv

Answer:
Children and T.V. Advertising
Namita Unnlkrishnan and Shailaja Bajpai have found that children spend much time in watching TV. Children in Delhi watch 17 hours of TV every week. Most of their time is spent in front of TV instead of outdoor games and homework. Thus the average 8-year-old child spends about 68 hours every month. This means one entire year out of 10 is spent on TV.

The younger children take them as true. They want the goods advertised on the TV. They sometimes try to imitate what the character in the advertisement does. Both these things have a very unhealthy effect on their minds. Parents should see that their children do not waste much time on TV.

Question 5.
Deepika Lai sees the poster below on child abuse. She decides to write to the editor of a local newspaper voicing her concern about the growing crime. Prepare that article considering yourself to be Deepika Lai.

Answer:
The Editor
The Hindu
Bahadur Shah Zafar Marg New Delhi
25 July 2007
Dear Sir
I want to draw the attention of the authorities to the problem of child abuse. The abuse is growing unchecked.
Almost in all small hotels, dhabas and tea shops one can see small children working. In small scale industries they work in the most unhygienic conditions. The society reacts to such inhuman scenes with indifference. The responsible people pass by such scenes. Even government officials ignore taking any action against the guilty. There is no doubt that family support is behind this child abuse. It is poverty and lack of employment that is responsible for it. It is hunger that forces the i children to work. One can well imagine what the children feel when they are forced to work. Their sweet childhood is snatched from them. Instead , of learning the alphabet, they learn to clean the plates. Lack of food, improper clothing, unhealthy conditions increase this misery of the children. And this goes on without any prick to our conscience.
I would urge the authorities to take immediate steps to check the child abuse at the earliest.
Yours faithfully
Deepika Lai