Central Tendency
A central tendency refers to a central value or a representative value of a statistical series.
According to Clark, “An average is a figure that represents the whole group”.

(iii) Frequency Distribution
There are three methods of calculating mean in frequency distribution
(a) Direct Method Direct method of estimating mean of the discrete frequency series uses the formula
\(\overline{X}=\frac{\Sigma f m}{\Sigma f}\)
m = mid-value, mid-value = \(\frac{L_{1}+L_{2}}{2}\)
L1 = lower limit of the class
L2 = upper limit of the class
(b) Short-cut Method Short cut method of estimating mean of the frequency distribution uses the formula
\(\overline{X}=A+\frac{\Sigma f d}{\Sigma f}\)
(c) Step Deviation Method According to this method, we find the Arithmetic Mean by the following formula
\(\overline{X}=A+\frac{\Sigma f d^{\prime}}{\Sigma f} \times c\)
(d) Weighted Arithmetic Mean It is the mean of weighted items of the series. Different items are accorded different weights depending on their relative importance. The weighted sum of the items is divided by the sum of the weights.

Calculation of Weighted Mean
According to this way, we find weighted mean from the following information
\(\overline{X}_{W}=\frac{\Sigma W X}{\Sigma W}\)
(i) Merits

Median
“The Median is that value of the variable which divides the group into two equal parts, one part comprising all values greater than the Median value and the other part comprising all the values smaller than the Median value”.
(i) Calculation of Median
(a) Individual Series Calculation of Median in individual series involves the following formula
M = Size of \(\left(\frac{N+1}{2}\right)\)th item
When N of the series is an even number, Median is estimated using the following formula

Quartiles
If a statistical series is divided in to four equal parts, the end value of each part is called a Quartile.
(i) Calculation of Quartiles Quartile values (Q1 and Q3) are estimated differently for different sets of series,
(a) Individual and Discrete Series

(b) Frequency Distribution Series In frequency distribution series, the class interval of Q1 and Q3 are first identified as under 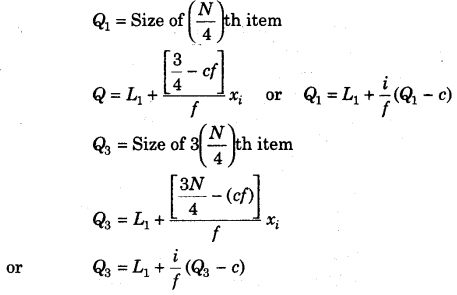 Percentiles
Percentiles divide the series into 100 equal parts, and is generally expressed as P.
Percentiles are estimated for different types of series as under
(i) Individual and Discrete Series 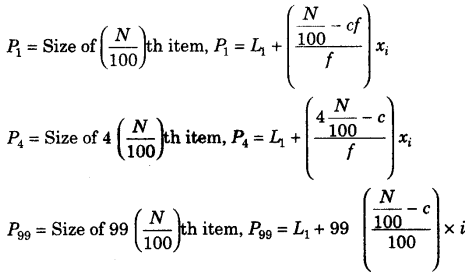 Mode
The value of the variable which occurs most frequently in a distribution is called the mode.
According to Croxton and Cowden, “ The mode may be regarded as the most typical of a series of value”.
(i) Calculation of Mode

Relative Position of Arithmetic Mean, Median and Mode Suppose we express,
Arithmetic Mean = Me
Median = Mi
Mode = Mo
The relative magnitude of the three are Me > Mi > Mo or Me < Mi < Mo The Median is always between the Arithmetic Mean and the Mode.