1. Choose the right answer from the four alternatives given below:

Question 1(i).
The measure of central tendency that does not get affected by extreme values
(a) Mean
(b) Mean and mode
(c) Mode
(d) Median
Answer:
(d) Median

2. Answer the following questions in about 30 words:

Question 2(i).
Define the mean.
Answer:
The mean is the value which is derived by summing all the values and dividing it by the number of observations.

Question 2(ii).
What are the advantages of using mode?
Answer:
Mode is the maximum occurrence or frequency at a particular point or value. The biggest advantage of mode is that it is not affected by extreme values. It can be determined even for open ended series.

Question 2(iv).
Define correlation.
Answer:
Correlation is basically a measure of relationship between two or more sets of data. It serves a very useful purpose.

3. Answer the following questions in about 125 words.

Question 3(i).
Explain relative positions of mean, median and mode in a normal distribution and skewed distribution with the help of diagrams.
Answer:
(a) Normal Curve: In this curve, highest frequency is at the centre and both tails on the left and right hand side are in identical fashion. It is a unimodal curve in which mean, median and mode are equal. It is also known as a bell¬shaped or symmetrical curve. It is shown below:

(b) Positively Skewed Curve: It is a symmetrical curve which has a tail on the right hand side of the graph and frequencies are more for the lower values of the data. These histograms have the curve on the left side of the distribution. If the right tail is longer, the mass of the distribution is concentrated on the left. It has relatively few low values. It is shown below: (c) Negatively Skewed Curve: It is a symmetrical curve which has a tail on the left hand side of the graph and frequencies are more for the higher values of the data. The left tail is longer, the mass of the distribution is concentrated on the right of the figure. It has relatively few low values. The distribution is said to be left-skewed. It is shown below: Question 3(ii).
Comment on the applicability of mean, median and mode (Hint: from their merits and demerits)
Answer:
Mean:

Question 3(iii).
Explain the process of computing Standard Deviation with the help of an imaginary example.
Answer:
Standard deviation (SD) is the most widely used measure of dispersion. It is defined as the square root of the average of squares of deviations. It is always calculated around the mean. The standard deviation is the most stable measure of variability and is used in so many other statistical operations. The Greek character a denotes it.
Steps:

Calculate the standard deviation for the following distribution:

Solution:
The method of obtaining SD for grouped data has been explained in the table below. The initial steps upto column 4, are the same as those we followed in the computation of the mean for grouped data. We begin with deviation value of zero has been assigned to the group. Like wise other deviations are determined. Values in column 4(fx’) are obtained by the multiplication of the values in the two previous columns. Values in column 5(fx’ 2) are obtained by multiplying the values given in column 3 and 4. Then various columns have been summed.

The following formula is used to calculate the Standard Deviation:

Limited degrees of correlation: If two variables are not perfectly correlated or is there a perfect absence of correlation, then we term the correlation as Limited correlation. It may be positive, negative or zero but lies with the limits ± 1.
High degree, moderate degree or low degree are the three categories of this kind of correlation. The following table reveals the effect (or degree) of coefficient or correlation.

Question 3(vi).
What are various steps for the calculation of rank order correlation?
Answer:
Step 1: Rank both sets of data. Give the largest value rank 1, the second largest value rank 2, etc.
Step 2: Calculate the differences in the ranks, d.
Step 3: Work out the squares of the differences (d2).
Step 4: Calculate the sum of these squared differences, \(\sum { d } ^{ 2 }\)
Step 5: Spearman’s Rank Correlation Coefficient is found by substituting this sum into the following formula:

where n is how many pairs of data you have.
Example: Find rank correlation from data given below:

So, for this set of data, the finished equation looks like this: Question 1.
Take an imaginary example applicable to geographical analysis and explain direct and indirect methods of calculating mean from ungrouped data.
Answer:
From the following data of the marks obtained by 60 students of a class.

Perfect Negative Correlation: If all points lie on a falling straight line the correlation is perfectly negative and r = -1. 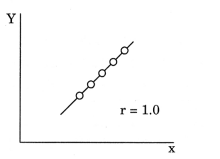 High degree of Positive Correlation:
If the points lie in a narrow strip rising upwards, the correlation is high degree of positive.

High degree of Negative Correlation:
If the points lie in a narrow strip falling downwards, the correlation is high degree of negative.

Low degree of Positive Correlation:
If the point are spread widely over a broad strip rising upwards, the correlation is low degree positive. 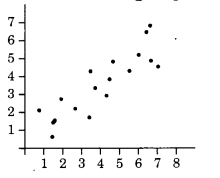 Low degree of Negative Correlation:
If the points are spread widely over a broad strip falling downwards, the correlation is low degree negative. Question 1.
What measures are adopted to find correlation?
Answer:
Correlation is measured either by Karl Pearson’s method or by Spearman’s rank correlation.
Question 2.
What do you mean by median?
Answer:
The median is defined as the number in the middle of a given set of numbers arranged in order of increasing magnitude. When given a set of numbers, the median is the number positioned in the exact middle of the list when you arrange the numbers from the lowest to the highest. The median is the middle most or central value of the observations made on a variable when the values are arranged either in ascending order or descending order.

Question 2.
What do you mean by mean? What measures are adopted to find it?
Answer:
The mean (or average) is the most popular and well known measure of central tendency. It can be used with both discrete and continuous data, although its use is most often with continuous data. The mean is equal to the sum of all the values in the data set divided by the number of values in the data set. So, if we have n values in a data set and they have values x1, x2, …. xn, the sample mean, usually denoted by x (pronounced xbar), is:

It is calculated by two methods: (a) Direct method and (b) Indirect method.

Question 3.
What do you mean by correlation?
Answer:
A statistical technique that is used to analyse the strength and direction of the relationship between two quantitative variables is called correlation analysis. The coefficient of correlation is a number that indicates the strength (magnitude) and direction of statistical relationship between two variables. The strength of the relationship is determined by the closeness of the points to a straight line when a pair of values of two variables are plotted on a graph. A straight line is used as the frame of reference for evaluating the relationship. The direction is determined by whether one variable generally increases or decreases when the other variable increases.

Question 4.
Give formula for finding mean.
Answer:
Solution-1 (Direct Method):
If x1,x2, x3, xn are ‘n’ individual observed values of a variable x, then the A.M is denoted by % and is defined as

Solution-2 (Short Cut Method):
Short Cut method: Under this method the formula for calculating mean is

Question 2.
What do you mean by Lorenz Curve?
It was given by Dr. Max. O. Lorenz. It is a graph on which the cumulative percentage of total national income (or some other variable) is plotted against the cumulative percentage of the corresponding population (ranked in increasing size of share). The extent to which the curve sags below a straight diagonal line indicates the degree of inequality of distribution.
Steps to Plot a Lorenz Curve:

Example: From the following details of monthly income, draw a Lorenz curve. Question 4.
Explain merits and demerits of median.
Answer:
According to Croxton and Cowden, “The median is generally defined as the value which divides the distribution so that an equal number of items is on either side of it.”

Question 5.
Explain merits and demerits of mode.
Answer:
Mode is the most frequent item in the series.

Question 6.
What is included in measures of dispersion? What is measured through it?
Answer:
Measures of central tendency do not reveal how values in the data set are dispersed (spread or scattered) on each side of the central value. The dispersion of values is indicated by the extent to which these values tend to spread over an interval rather than cluster closely around an average. The statistical techniques to measure such dispersion are of two types:
1. Techniques that are used to measure the extent of variation or the deviation (also called degree of variation) of each value in the data set from a measure of central tendency, usually the mean or median. Such statistical techniques are called measures of dispersion (or variation).
2. Techniques that are used to measure the direction (away from uniformity or symmetiy) of variation in the distribution of values in the data set. Such statistical techniques are called measures of skewness.
It includes the following:

Mean Deviation in Discrete Series:
If the data is grouped in a frequency table, the expression the mean deviation is

Question 1.
What is the minimum and maximum value of correlation?
Answer:
1< R<+1

Question 3.
What is the relationship between mean, median and mode in a normal distribution?
Answer:
Mean = median = mode

Question 4.
What is the relationship between mean, median and mode in skewed distribution?
Answer:
Mode = 3 Median – 2 Mean

Question 5.
Who gave the concept of Lorenz Curve?
Answer:
It was given by Dr. Max. O. Lorenz.