NCERT Textbook for Class 9 Science – Page 141
Questin 1. Why is it difficult to hold a school bag having a strap made of a thin and strong string?
Answer: The force exerted by a thin and strong string is distributed to very less area and hence the force applied due to the bag is more, the pressure exerted on the body by thin straps will be more and hence will be more painful.
As pressure is inversely proportional to area, if the area is reduced pressure

Questin 2. What do you mean by buoyancy?
Answer: The upward force exerted by any fluid (liquid, gas) on an object is known as upthrust or buoyancy.

Questin 2. You have a bag of cotton and an iron bar, each indicating a mass of 100 kg when measured on a weighing machine. In reality, one is heavier than other. Can you say which one is heavier and why?
Answer: The heaviness of the bag can be given by density

Mass of both cotton bag and iron bag is same. But the volume of cotton bag is more than the iron bag.
Hence density is inversely proportional to volume. The bag of iron will be heavier.

Question 20. Why does a block of plastic released under water come up to the surface of water?
Answer. The floating or sinking of a body in the water is decided by the density of both the body and water’s buoyant force acting on the body by the liquid.
The density of plastic is less than the water and the buoyant force exerted by water on the plastiq block is greater than the force exerted by plastic on the water. 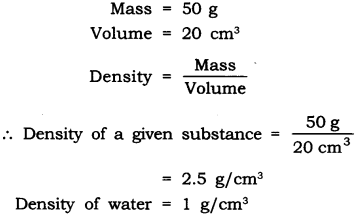 Question 22. The volume of a 500 g sealed packet is 350 cm3. Will the packet float or sink in water if the density of water is lg cmr3? What will be the mass of the water displaced by this packet?
Answer: 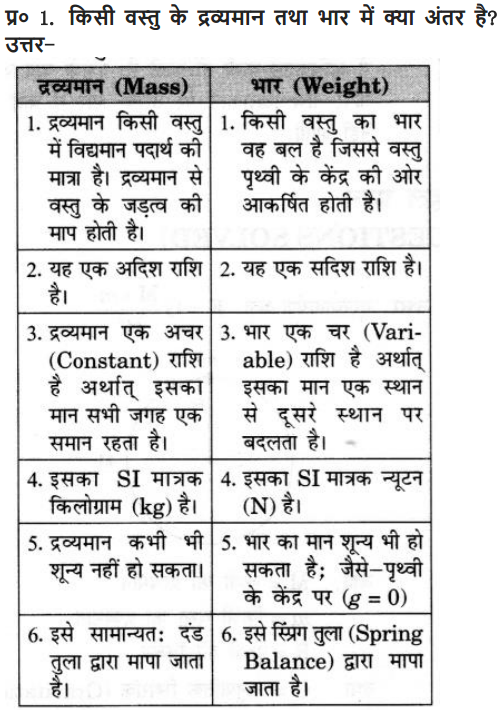 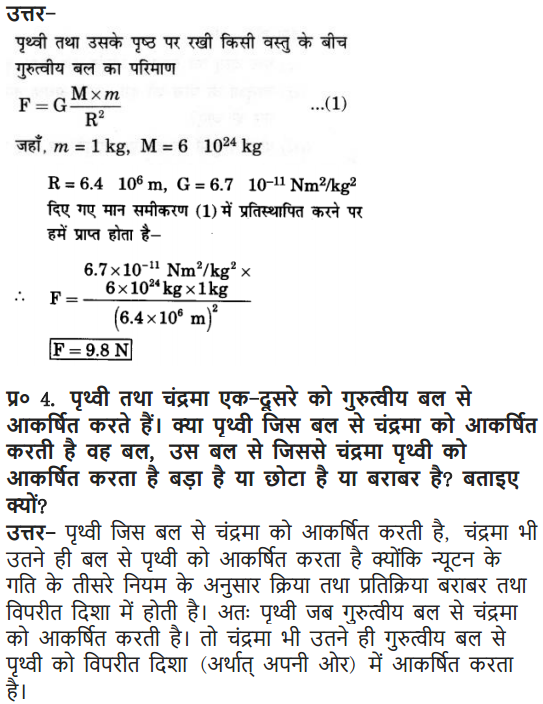 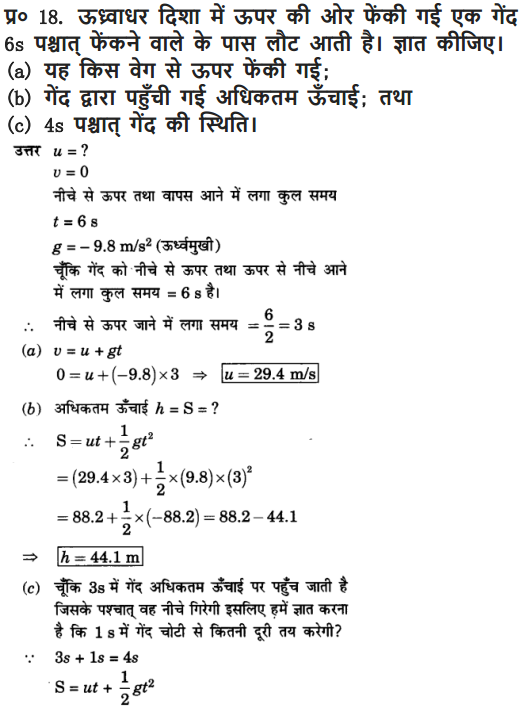 Question 1. What is the S.I. unit of thrust?
Answer: Newton.

Question 3. Define thrust.
Answer: The net force exerted by a body in a particular direction is called thrust.

Question 6. Why a truck or a motorbike has much wider tyres?
Answer: The pressure exerted by it can be distributed to more area, and avoid the wear and tear of tyres.

Question 7. Why are knives sharp?
Answer: To increase the pressure, area is reduced,
As pressure ∝ 1/Area hence the pressure or force exerted on a body increases.

Question 8. Why is the wall of dam reservoir thicker at the bottom?
Answer: The pressure of water in dams at the bottom is more, to withstand this pressure the dams have wider walls.

Question 10. While swimming why do we feel light?
Answer: The swimmer is exerted by an upward force by water, this phenomenon is called buoyancy and it makes the swimmer feel light.

Question 11. Define density and give its unit.
Answer: The density of a substance is defined as mass per unit volume. Its unit is kg/m3.

Question 1. A ship made of iron does not sink but the iron rod sinks in water, why?
Answer: The iron rod sinks due to high density and less buoyant force exerted by the water on it, but in case of ship the surface area is increased, the upthrust experienced by the body is more. So it floats on water

Question 2. Camels can walk easily on desert sand but we are not comfortable walking on the sand. State reason.
Answer: Camels feet are broad and the larger area of the feet reduces the force/ pressure exerted by the body on the sand. But when we have to walk on the same sand, we sink because the pressure exerted by our body is not distributed but is directional.

Question 1. With the help of an activity prove that the force acting on a smaller area exerts a larger pressure?
Answer: Consider a block of wood kept on a table top. The mass of the wooden block is 5 kg. Its dimension is 40 cm x 20 cm x 10 cm.
Now, we have to find the pressure exerted by the wooden block on the table top by keeping it vertically and horizontally. Answer: The iron nail sinks as the density of nail is more and the downward force exerted on nail is more than the buoyant force. Question 1. A milkman sold his milk in the city and always carried lactometer with him. The customers trusted him and his business flourished.
(a) What is lactometer?
(b) What is the principle of working of lactometer?
(c) What value of milkman is seen in this case?
Answer.
(a) Lactometer is a device that measures the purity of milk.
(b) The principle of lactometer is ‘Archimedes’ principle’. It states that when a body is immersed fully or partially in a fluid, it experiences an upward force that is equal to the weight of the fluid displaced by it.
(c) Milkman is very honest and trustworthy.

Question 2. Reeta was wearing a high heel shoe for a beach party, her friend told her to wear flat shoes as she will be tired soon with high heels and will not feel comfortable,
(a) Why would one feel tired with high heel shoes on beach?
(b) Give the unit of pressure.
(c) What value of Reeta’s friend is seen in the above act?
Answer:
(a) The high heel shoes would exert lot of pressure on the loose sand of beach and will sink more in the soil as compared to flat shoes. Hence large amount of force will be required to walk with heels.
(b) Unit of pressure is Pascal.
(c) Reeta’s friend showed the value of being helpful, concerned and intelligent.

Question 3. In the school fair, there was a game in which one need to find the heaviest ball without holding them in hand. Three balls were given and few disposable glasses were kept. Tarun saw his friend struggling to win the game but he was unable to find the heaviest ball. Tarun helped him by dipping the three balls one by one in the glass’es full of water upto the brim and finally they won the game.
(a) Why did Tarun told his friend to dip the balls one by one in completely filled glass of water?
(b) Name the principle used here.
(c) What value of Tarun is reflected in this case?
Answer:
(d) Tarun wanted to measure the amount of water displaced by each ball when dipped in water.
(b) The principle used is ‘Archimedes’ principle’.
(c) Tarun showed the value of being helpful, kind and intelligent.