These solutions are part of NCERT Solutions for Class 9 Science. Here we have given Class 9 NCERT Science Text book Solutions for Chapter 1 matter in our Surroundings.

NCERT Textbook for Class 9 Science – Page 32
Question 1. In a reaction 5.3 g of sodium carbonate reacted with 6 g of ethanoic acid. The products were 2.2 g of carbon dioxide, 0.9 g water and 8.2 g of sodium ethanoate. Show that these observations are in agreement with the law of conservation of mass carbonate.
Answer. Class 9 Science NCERT Textbook Page 32
Question 1. In a reaction 5.3 g of sodium carbonate reacted with 6 g of ethanoic acid. The products were 2.2 g of carbon dioxide, 0.9 g water and 8.2 g of sodium etkanoate. Show that these observations are in agreement with the law of conservation of mass carbonate.
Answer:

Question 4. Which postulate of Dalton’s atomic theory can explain the law of definite proportions?
Answer: The relative number and kinds of atoms are constant in a given compound.

Question 2. Why is it not possible to see an atom with naked eyes?
Answer: Atom is too small to be seen with naked eyes. It is measured in nanometres.
1 m = 109 nm 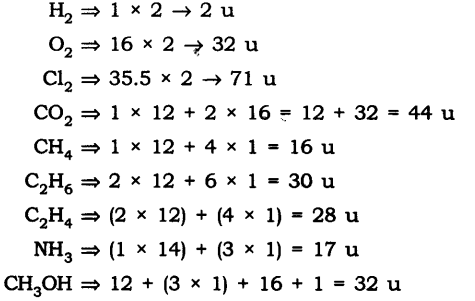 Class 9 Science NCERT Textbook Page 42
Question 1. If one mole of carbon atoms weigh 12 grams, what is the mass (in grams) of 1 atom of carbon?
Answer: 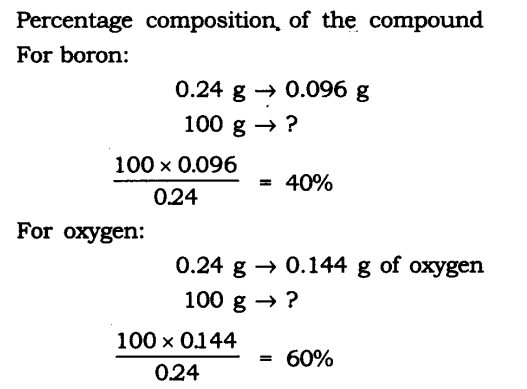 Question 3. What are poly atomic ions? Give examples.
Answer: The ions which contain more than one atoms (same kind or may be of different kind) and behave as a single unit are called polyatomic ions e.g., OH–, SO42-, CO32-. 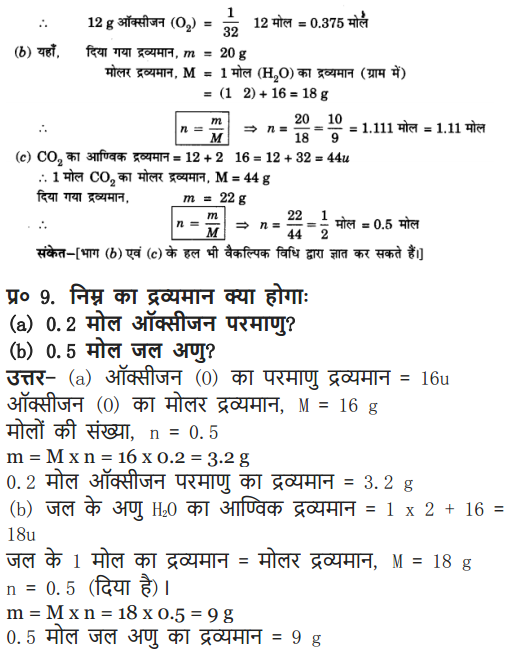 Question 2. Explain law of constant proportion.
Answer: In a chemical substance the elements are always present in definite proportions by mass.
E.g., In water, the ratio of the mass of hydrogen to the mass of oxygen H : O is always 1:8

Question 4. Define atom.
Answer: The smallest particle of matter, which can take part in a chemical reaction is called atom.

Question 5. Define molecule.
Answer: The smallest particle of an element or compound which can exist independently is called molecule.

Question 6. Define atomicity.
Answer: The number of atoms constituting a molecule is known as its atomicity.

Question 8. How do atoms exist?
Answer: Atoms exist in the form of atom, molecule or ions.

Question 2. What is IUPAC, give its one function?
Answer: IUPAC is International Union for Pure and Applied Chemistry. It approves the names of elements.

Question 6. What is polyatomic ton? Give one example.
Answer: A group of atoms carrying a charge is known as a polyatomic ion.
E.g., Ammonium – NH4+
Nitrate – N03–

Question 13. What are the rules for writing the symbol of an element?
Answer: IUPAC —> International Union of Pure and Applied Chemistry approves name of elements.
Symbols are the first one or two letters of the element’s name in English. The first letter of a symbol is always written as a capital letter (upper case) and the second letter as a small letter (lower case).
e.g., Hydrogen —> H Helium —> He
Some symbols are taken from the names of elements in Latin, German or Greek.
e.g., Symbol of iron is Fe, its Latin name is Ferrum.
Symbol of sodium is Na, its Latin name is Natrium.

Question.16. State 3 points of difference between an atom and an ion.
Answer. (b) The number of atoms constituting a molecule is known as its atomicity.
E.g.,O3 —> atomicity is 3
O2 —> atomicity is 2
(c) Polyatomic ions: When more than two atoms combine together and act like an atom with a charge on it is called polyatomic ion.
E.g., OH–, N03–, NH4+ 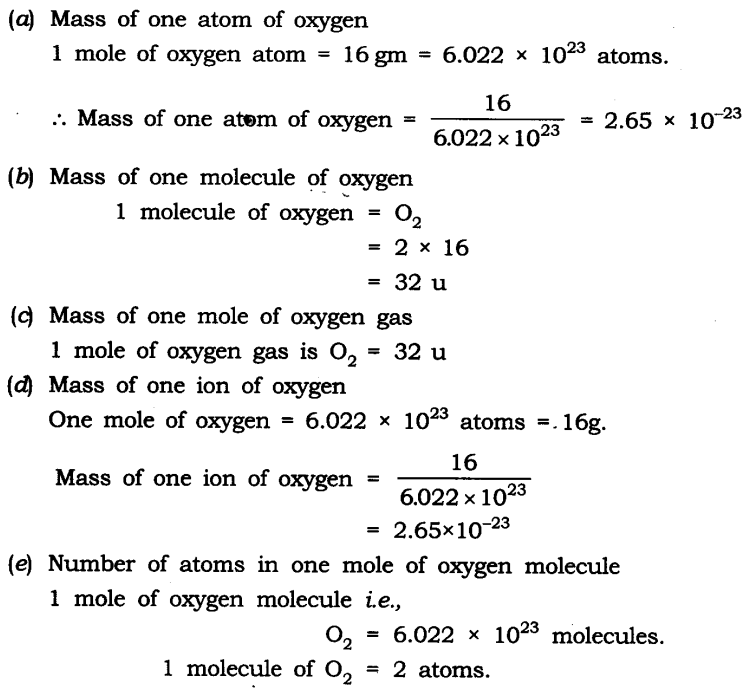 Question 4. Define a mole. Give the significance of the mole.
Answer: Mole-One mole of any species (atoms, molecules, ions or particles) is that quantity or number having a mass equal to its atomic or molecular mass in grams.
1 mole = 6.022 x 1023 in number (atoms, molecules, ions or particles)
Significance of the mole
1. A mole gives the number of entities present i.e, 6.022 x 1023 particles of the substance.
2. Mass of 1 mole is expressed as M grams.

Question 1. A customer buys a gold jewellery, he is told that the jewellery has 90% gold and the rest copper. He is given a bill which amounts 100% charges of gold. The customer refuses to pay the bill for 100% gold but brings it to 90% gold amount and settles the bill.
(a) How many atoms of gold are present in 1 gram of gold?
(b) What is the ratio of gold and copper in the jewellery?
(c) What value of customer is reflected in the above statement?
Answer: 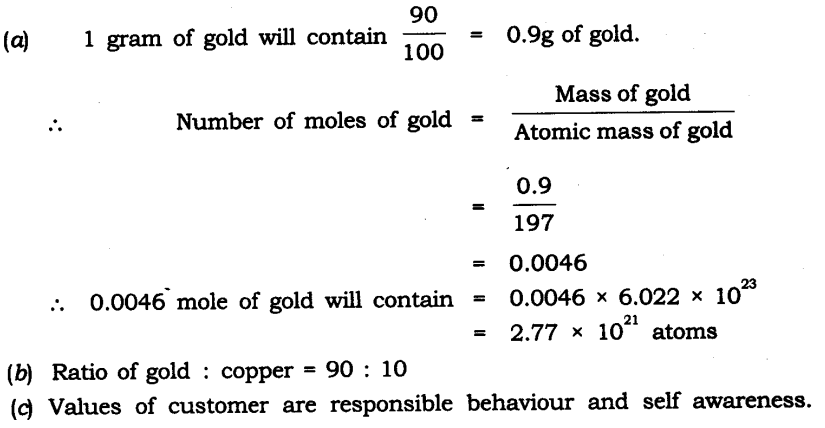