Question 2:
The bicycle “goes easily enough in the morning and a little stiffly after lunch.” The remark is Mark your choice(s)

Question 3:
Find two or three sentences in the text which express the author’s disapproval of it.
Solution:

Question 4:
“ …..if not, it would make a serious difference to the machine.” What does ‘if refer to?
Solution:
‘It’ refers to ball bearings.  Working with the Text

Answer the following questions.
Question 1:
Did the front wheel really wobble? What is your opinion? Give a reason for your answer.
Solution:
The front wheel wobbled occasionally, but it didn’t require any attention. The bicycle was in good condition and the author was pleased with it.

Question 4:
What special treatment did the chain receive?
Solution:
Author’s friend tightened it to an extent that it didn’t move at all. He then loosened it until it was twice as loose as it was before.

Question 5:
The friend has two qualities—he knows what he is doing and is absolutely sure it is good. Find the two phrases in the text which mean the same.
Solution:

Question 6:
Describe ‘the fight’ between the man and the machine. Find the relevant sentences in the text and write them.
Solution:
The bicycle was in good condition, but the author’s friend unnecessarily disturbed it. He first took out front-wheel and then the gear-case, his next victim was the chain. He really had a tough time in fixing these parts back into their place.
Then he lost his temper and tried bullying the thing. The bicycle, I was glad to see, showed spirit and the subsequent proceedings degenerated into little else than a rough and tumble fight between them and the machine.One moment the bicycle would be on the gravel path and he on top of it; the next, the position would be reversed – he on the gravel path, the bicycle on him.
Now he would be standing flushed with victory, the bicycle firmly fixed between his legs. But his triumph would be short-lived. By a sudden, quick movement it would free itself and turning upon him, hit him sharply over the head with one of its handles.

Note: ‘Should’ and ‘ought to’ are often used interchangeably.
Rewrite each of the following sentences using should / ought to / must in place of the italicised words. Make other changes wherever necessary.

Question 2:
Use should/must/ought to appropriately in the following sentences.

Question 3:
Two or more single sentences can be combined to form a single sentence.
Read the following.
I made an effort and was pleased with myself. This sentence is in fact a combination of two sentences.

Divide each of the following sentences into its parts. Write meaningful parts. If necessary, supply a word or two to make each part meaningful.

Question 4:
‘en’ acts as a prefix (put at the beginning) or as a suffix (put at the end) to form new words.
en + courage = encourage
weak + en = weaken
‘en’ at the beginning or at the end of a word is not always a prefix or a suffix.
It is then an integral part of the word ending, barren
(i) Now arrange the words given in the box under the three headings – prefix, suffix and part of the word.

(ii) Find new words in your textbook and put them under the same headings
Solution: 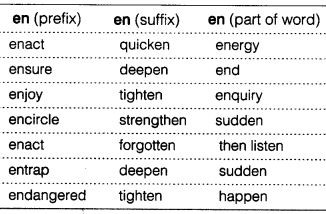 Question 1:
Where did the author planned to do alongwith his friend?
Solution:
The author and his friend planned to go for ride on his bicycle.

Question 5:
Was it right for the author’s friend to dismantle the bicycle?
Solution:
The author’s bicycle was in a perfect state there was no use of dismantling its parts by his friend.

Question 2:
What happened to the ball bearings?
Solution:
Author’s friend unscrewed the ball bearings without informing him. They started rolling on the ground and then they might have lost some of it there. Then the author kept them in his hat which was later blown away by the wind because of which they again lost five of those bearings.

Question 3:
What was the state of the author’s friend at the last?
Solution:
The author’s friend was completely tired because of his struggle with the bicycle. He was soiled with oil and dirt. He found fixing the parts of the bicycle extremely tough and somehow got those parts in place. He called it quits finally claiming that this is enough.

Question 1:
The author didn’t go for the bicycle ride he had planned with his friend why?
Solution:
The author and his friend had planned to go for a ride on the bicycle, but the two couldn’t make it. His friend dismantled all the parts of the bicycle one-by-one. He first took out the front wheel and then the ball bearing from it. The chain was his next victim before he finally moved on to the gear-case. It took his friend the entire day to fix these parts back into their place and then he finally left for his home.

Question 2:
Author’s friend had taken out the parts of the bicycle easily, but he really had tough time fixing them Explain this with suitable example.
Solution:
The author’s friend has taken out the ball bearings from the front wheel without any alarm. He then started fixing the front wheel only to realise latter that he had not put those bearings back into their place. He then moved to the chain.
He first tightened it to an extent that it wasn’t moving and loosened twice its earlier state. The gear-case was the most complicated one. He took it easily, but a tough time fixing it back.

Question 1:
We should not mess up with things that belong to others. Elaborate.
Solution:
We should treat things that belongs to others with utmostcare. We should treat them even more cautiously than we would have treated our things.
There are many things around us that we consider dear to us. Similarly people are also emotional about their things and we must respect their feelings.
Treating other’s thing’s callously will make them lose their trust on us and they might not lend their things to us again. We should take uttermost care while handling things belonging to others and must return them at once when our job is done.

Question 2:
Friendship is a great relation. We all must treasure our friends. Explain.
Solution:
It is great to have friends in life. They add colours to our life. There are many things which we cannot share with our family, but can share with our friends easily.
Our friends help us in our time of need and stand beside us during our thick and thin. We trust them and can rely on them in times of need. We must be helpful and understanding towards our friend and must always be available to render our help to them.

Directions (Q. Nos. 1-6) Read the extract given below and answer the following questions.
“Catch ’em!” he shouted; “catch ’em! We mustn’t
lose any of them.” He was quite excited about them.
We groveled round for half an hour and found sixteen.
He said he hoped we had got them all, because, if
not, it would make a serious difference to the machine.
I had put them in safety in my hat. It
was not a sensible thing to do I admit.

Question 2:
What were they looking for?
Solution:
They were looking for the ball bearings.

Question 5:
Find one word from the given lines which is antonym of ‘bored’.
(a) Hopped
(b) Groveled
(c) Thrilled
(d) Excited
Solution:
(d) Excited

Directions (Q. Nos. 1-6) Read the extract given below and answer the following questions.
He said, “This is dangerous; have you got a hammer?” I
ought to have been firm, but I thought that perhaps he
really did know something about the business. I went to
the tool shed to see what I could find. When I came back
he was sitting on the ground front wheel between his legs.

Question 5:
Find out one word from the given lines that is synonym of the word ‘possibly’.
(a) Mostly       (b) Definitely
(c) Certainly   (d) Perhaps
Solution:
(d) Perhaps