Question 1:
Mark the correct answer in each of the following.

Question 3:
Match items in Column A with those in Column B. 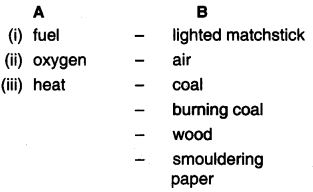 Question 4:
What are the three main ways in which a fire can be controlled or put out?
Solution:
Fire can be put out by taking away the fuel, stopping the supply of oxygen or by lowering down the temperature around the fuel, so that the fuel is not able to attain its flash point. Question 1:
Read the following sentences.
To burn paper or a piece of wood, we heat it before it catches fire. We generally do it with a lighted match. Every fuel has a particular temperature at which it burns.
The verbs in italics are in the simple present tense. When we use it, we are not thinking only about the present. We use it to say that something happens all the time or repeatedly or that something is true in general.
Find ten examples of verbs in the simple present tense in the text ‘Fire: Friend and Foe’ and write them down here. Do not include any passive verbs.
Solution:

Question 2:
Fill in the blanks in the sentences below with words from the box. You may use a word more than once.

Question 3:
One word is italicised in each sentence. Find its opposite in the box and fill in the blanks.

Question 4:
Use the words given in the box to fill in the blanks in the sentences below.

Question 1:
Why the early man was afraid of fire?
Solution:
The early man might have seen volcanoes or lightning before he started using fire and was hence knew it was dangerous and powerful. So, he was scared of fire.

Question 1:
How fire is a good servant?
Solution:
Fire is a good servant. When kept under control fire helps us do many things. In most of our home we cook our food on fire.
We use fire to keep us warm during extreme winter. It is also used in generating electricity.

Question 2:
Before fire brigades were set out, how people tried to put out fire.
Solution:
Before the fire brigade came into the picture people used to extinguish fire forming human chain. Everyone was a fireman in that scenario.
People used to pass buckets filled with water from a pond or well through each other and the person at the extreme end used to pour it over the flames.

Question 1:
Explain with an example how can you put out fire by cutting the supply of oxygen.
Solution:
Oxygen is one of the three elements essential for causing fire. If we can disrupt the supply of oxygen then we can put of the fire.
This can be applied in case of small fires. If we throw a damp blanket or a sack over the fire, it cuts off the supply of oxygen and the fire is immediately put off.

Question 2:
Why we cannot use water to put out some fires?
Solution:
We cannot use water in case of oil and electric fires. Oil floats over water and thus oil fires cannot be extinguished using water.
Water flows on and it has the risk of spreading the fire along. In case of electric fires water cannot be used as an extinguisher. It being a good conductor of electricity, puts the life of the man spraying it in danger.

Directions (Q. Nos. 1-6) Read the extract given below and answer the following questions.
Some fire cannot be put out with water. If water is
sprayed onto an oil fire, the oil will float to the top
of the water and continue to burn. This can be very
dangerous because water can flow quickly, carrying
the burning oil with it and spreading the fire.

Question 1:
What is oil fire?
Solution:
A fire caused because of inflammable oils like petroleum, kerosene, diesel etc is called oil fire.

Question 4:
Water cannot extinguish oil fire, but
(a) controls it
(b) spreads it
(c) has not impact on it
(d) None of these
Solution:
(b) spreads it

Question 5:
Find one word from the given lines that is antonym of ‘slow’.
(a) Spray
(b) Dangerous
(c) Rapid
(d) Quick
Solution:
(d) Quick

Directions (Q. Nos. 1-6) Read the extract given below and answer the following questions.
The second way of putting the ……………….. burning material. The third way of putting out a fire is to remove the heat.

Question 1:
How can small fires be put out?
Solution:
Small fires can be put out using a damp blanket or a sack, since it shops oxygen from reaching the burning material.

Question 5:
Which word in the above extract means ‘stop burning’?
Solution:
Extinguish

Question 6:
Which word in the above extract is a synonym of ‘moist’?
Solution:
Damp