(vi) The pressure exerted by the weight of air on the earth’s surface is known as air pressure. 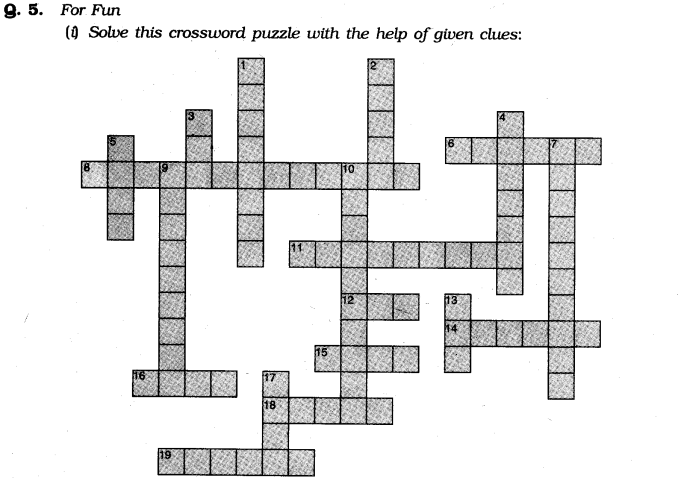 (ii) Make a weather calender for one week. Use pictures on symbols to show different types of weather. You can use more than one symbol in a day, if the weather changes. For example the sun comes out when .rain stops. An exmaple is given below: Question 2.  What is the significance of greenhouse gas?
Answer:  Without the greenhouse gas the earth would have been too cold to line in.

Question 4.  What is the nature of cold air?
Ans. It has tendency to go down.

Question 6.  What is an important feature of Stratosphere?
Answer:  Stratosphere contains a layer of ozone gas.

Question 7.  How is ozone important for us?  [Imp.]
Answer: It protects us from the harmful effect of the sunrays.

Question 8.  What is temperature?
Answer: The degree of hotness and coldness of the air is known as temperature.

Question 9.  What is insolation?
Answer:  Insolation is the incoming solar energy intercepted by the earth.

Question 11.  Where is air pressure highest?
Answer: Air pressure is highest at the sea level.

Question  14.  What is the hot and dry wind of northern planes of India called?
Ans. It is called loo.

Q 16 Why do we feel uncomfortable on a humid day?
Ans. It is because sweat from our body does not evaporate easily.

Q.1 Give an account of the composition of the atmosphere. [V. Imp.]
Ans. Our atmosphere is composed of mainly two gases—nitrogen (78%) and oxygen (21%). Other gases like carbon dioxide, helium, ozone, orgon and hydrogen are found in lesser quantities. Apart from these gases, tiny dust particles are also present in the air.

Q.2 How do Bacteria help plants use nitrogen? [V. Imp.]
Ans. Nitrogen is essential for the survival of the plant. But plants cannot take nitrogen directly from the air. Bacteria, that live in the soil and roots of some plants, take nitrogen from the air and change its form so that plants can use it.

Q.5 Write a short note on the distribution of air pressure in the atmosphere. [Imp.]
Ans. Air pressure is the pressure exerted by the weight of air on the earth’s surface. As we go up the layers of the atmosphere, the pressure falls rapidly. The air pressure is highest at the sea level and decreases with height. Horizonally the distribution of air pressure is influenced by the temperature of the air at a given place. In areas where the temperature is high the air gets heated and rises. This creates a low-pressure area. In areas having lower temperature, the air is cold, hence, it is heavy. Heavy air sinks and creates a high-pressure area.

Q.2 What is wind? Mention its different types.
Ans. The wind is the movement of air from the high-pressure areas to low-pressure areas. It is divided into three types: