NCERT Textbook Page 162
How many Hours?
All of us enjoy watching television (TV) or listening to the radio.
1. How much time do we spend in this?
Ans. Usually, I spend about 1 hour every day on TV.

4. Find out from your friends the time they spend in a week.
Ans. I talked to my friends about their hours spent on TV which are as follows:

Which Programme?
There are different types of programmes on TV or radio such as cartoon, news, sports, music, plays, serials. Juhi’s father likes watching serials. Her mother likes sports. Juhi likes news programmes.
1. Ask people in your family to name one programme they like and one programme they dislike. Make a table.
Ans. In my family people likes and dislikes these programmes

NCERT Textbook Page 164
Who is My Friend?
I’ve a friend with me always,
In the nights and through the days.
When I run he runs with me,
Sometimes I lead, sometimes he.
When It’s dark he can’t be seen,
Do you know which friend I mean?
1. Read the poem carefully and answer these questions.
(а) Which word comes most often in the poem?
(b) Which letter has been used most?
(c) Which letter comes the least?
Ans. To answer these questions, first of all make a table regarding this: 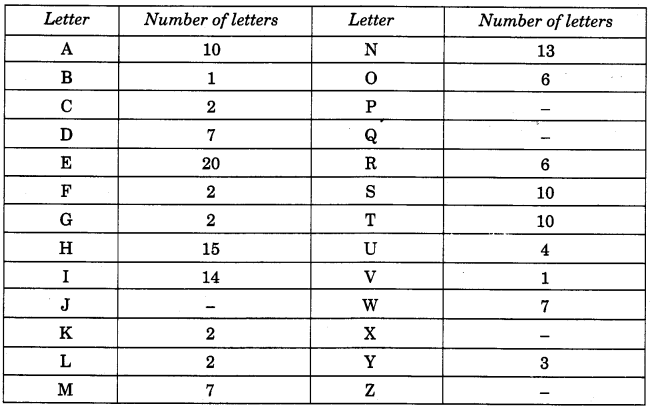 2. Take a paragraph you like from your language textbook. Read carefully and find out.
(a) Which word comes most often? How many times?
(b) Which word comes least often?
(c) The letter used most often is_______
(d) The letter used least often is_______
Ans. This paragraph is considered.
There are 4 houses on his land and in the middle there is a well. He wants to divide this land equally among his four children. Each should get one house and be able to use the well without entering the other’s land. NCERT Textbook Page 166
Food we Eat
1. Find out from your classmates and fill the table.
Ans. The table is given as follows: NCERT Textbook Pages 167-168
Whose Head is Bigger?
Cut long paper strips from waste paper. Give one strip to each of your friends. Now put the paper strip around your head and tear off the extra strip. On a big sheet, paste these paper strips along a line.
Use a scale and find out from your chart:
(a) The length of the longest strip is_______cm
(b) So,_______has the biggest head.
(c) The smallest strip is_______cm long. It belongs to_______
Ans. The strips belongs to my friend’s is head are pasted like as: Getting Wet in the Rain
Who likes to get wet in the rain? A child made this Chapati Chart after asking his friends.

NCERT Textbook Page 170 Tea,
Coffee, or Milk
Some children were asked which of these they liked most-Tea, Coffee or Milk.