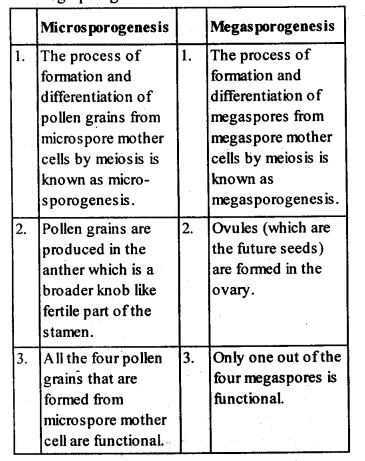 4. With a neat, labelled diagram, describe the parts of a typical angiosperm ovule.
Ans: 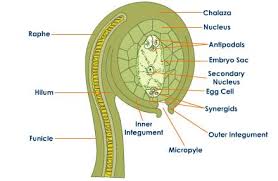 A typical angiospermic ovule is a small structure which is formed in the ovary. Ovule first develops as a projection on the placenta and composed of multilayered cellular tissue called the nucellus. The hypodermal cell of die nucellus enlarges and transformed into megaspore mother cell. This cell undergoes meiosis to produce four haploid cells only one of which develops & forms embryo sac (female gametophyte). An ovule may be surrounded by one or two protective layers called integuments, leaving a small opening at one end termed as micropyle which acts as passage for the entry of the pollen tube into the ovule. Thus, a typical ovule consists of a fully developed embryo sac with the nucellus and integuments.

6. With a neat diagram explain the 7-celled, 8- nucleate nature of the female gametophyte.
Ans: Embryo sac (or female gametophyte) is formed by three successive mitotic divisions that take place in the nucleus of megaspore.
The nucleus of the functional megaspore divides meiotically to form two nuclei which move to the opposite poles, forming the 2-nucleate embryo sac. Two more sequential mitotic nuclear divisions result in the formation of the 4-nucleate and later the 8-nucleate stages of the embryo sac. After the 8-nucleate stage, cell walls are laid down leading to the organisation of the typical female gametophyte or embryo sac. Six of the eight nuclei are grouped together at micropylar and chalazal end and form the egg apparatus and antipodals respectively. The large central cell left over with two polar nuclei. Thus, a typical female gametophyte consists of 7 cells with 8 nucleus.

Cleistogamous flowers are those flowers which do not open at all. In these flowers, the anthers and stigma lie close to each other, when anthers dehisce in the flower buds, the pollen grains come in the contact with stigma to effect pollination. So these flowers are invariably self-pollinated as the flowers remain closed and there is no chance of cross pollen landing on the stigma. Pollination and seed setting are assured even in the absence of pollinators

9. What is self-incompatiblility? Why does self-pollination not lead to seed formation in self-incompatible species?
Ans: If a pistil carrying functional female gametes fails to set seeds following pollination with viable and fertile pollen, capable of bringing about fertilisation in another pistil, the two are said to be incompatible, and the phenomenon is known as sexual incompatibility. Sexual incompatibility may be interspecific (between individuals of different species) or intraspecific (between individuals of the same species). The latter is also called self-incompatibility. Self-incompatibility is a gene-physiological process. Incompatibility reactions are controlled by a single gene, called S-gene, which has several alleles. Pollen grains that possess the S-allele common to any one of the two alleles present in the cells of the pistil, will not be functional on that particular pistil. However, every pollen grain having no common S alleles with pistil would be functional on the pistil of a that plant. As self pollens are unable to fertilise the egg to form pmbryo, hence seeds are not formed in self-incompatible species.

10. What is bagging technique? How is it useful in a plant breeding programme?
Ans: It is the covering of emasculated flowers (removal of anthers in bud condition from a bisexual flower by a bag of butter paper or polythene in their bud condition i.e., before anthesis) to prevent contamination of its stigmas with unwanted pollens. When the stigmas of emasculated flowers mature the bags are removed, stigmas are dusted with pollen grains of desired male . plants by means of a presterilized brush and flowers are rebagged till fruit develop. This technique is mainly used in artificial hybridization. Plant breeders often use this technique to prevent the contamination of stigma of the flowers from unwanted pollen grains.

11. What b triple fusion? Where and how does it take place? Name the nuclei involved in triple fusion.
Ans: Fusion of second male gamete with die two polar nuclei located in the central cell to form the triploid primary endosperm nucleus (PEN) is called triple fusion or vegetative fertilization. This process takes place in the embryo sac. After reaching the ovary, pollen tube enters into the embryo sac from the micropylar end. After penetration, the tip of the pollen tube ruptures releasing the two male gametes. The one male gamete fuses with the egg to form the diploid zygote. This process is called syngamy and the other male gamete fuses with the two polar nuclei to form the triploid primary endosperm & this process is known as triple fusion. These two events of fertilization constitute the process of double fertilization.

12.Why do you think the zygote is dormant for sometime in a fertiUsed ovule?
Ans: The zygote after a period of rest develops into embryo. Most zygotes remain dormant till certain amount of endosperm forms. They do so, to provide assured nutrition to the developing embryo. 14. Why is apple called a false fruit? Which Part(s) of the flower forms the fruit?
Ans: Botanically ripened ovary is called a true fruit. The fruits in which thalamus and other floral parts develop along with the ovary are called false fruits. For example – apple, strawberry, cashew etc. In apple the main edible portion of the fruit is the fleshy thalamus. Ovary forms the fruit after fertilization or without fertilization in parthenocarpic fruits.

15. What is meant by emasculation? When and why does a plant breeder employ this technique?
Ans: Removal of stamens or anthers of a bisexual flower without affecting the female reproductive organs is called emasculation. This technique is used in artificial hybridisation. In such crossing experiments it is important to make sure that only the desired pollen grains are used for pollination and the stigma is protected from contamination from unwanted pollens. This is achieved by emasculation and bagging technique. This technique is used to obtain desired variety of seeds.

17. Explain the role of tapetum in the formation of pollen grain wall.
Ans: Tapetum is the innermost wall layer of anther. The cells of this layer have large nuclei and dense cytoplasm. This layer is of great physiological importance as most of the food material from outside passes through this layer. At maturity, these cells degenerate and provide nourishment to developing microspores or pollens inside. Tapetum is the layer, which secretes both enzymes and substances of hormonal nature.
The main function of tapetum is to provide nutrition to pollens but it also secretes some substances of utmost importance like :

18. What is apomixis and what is its importance?
Ans: Apomixis is a mode of asexual reproduction that produces seeds without fertilization, e.g.- some species of Asteraceae and Grasses. This method is important in hybrid seed industry. Hybrids are extensively cultivated for increasing productivity. But the main drawback is that the hybrid seeds are to be produce every year because the seeds of the hybrid plants da not maintain hybrid characters for longer period due to segregation of characters. This can be avoided if apomixis can be introduced in hybrid seeds. For this reason scientists are trying hard to identify genes for apomixis.