1. What are macromolecules? Give examples.
Solution: Macromolecules are large high molecular weight substances with complex molecular structure and occur in colloidal state (being insoluble) in intracellular fluid. These are formed by polymerization of large number of micromolecules. Polysaccharides, proteins and nucleic acids are few examples.

2. Illustrate a glycosidic, peptide, and a phospho- diester bond.
Solution. (i) Glycosidic bond is the type of chemical linkage between the monosaccharide units of disaccharides, oligosaccharides and polysaccharides, which is formed by the removal of a molecule of water.

(ii)Peptide bonds are formed by the reaction between carboxyl (- COOH) of one amino acid and amino (- NH2) group of other amino acid with the elimination of water. 3. What is meant by tertiary structure of proteins?
Solution: The helical polypeptide molecule may fold on itself and assume a complex but specific form-spherical, rod-like or any form in between these. These geometrical shapes,are known as tertiary (3°) structure of protein molecules. The coils and folds of the polypeptide molecules are so arranged as to hide the non-polar amino acid chains inside and to expose the polar side chains. The tertiary structure of a protein brings distant amino acid side chains nearer to form active sites of enzymatic proteins. The tertiary structure is maintained by weak bonds such as hydrogen, ionic, disulphide and hydrophilic – hydrophobic bonds, formed between one part of a polypeptide and another. This structure is easily disrupted by pH, temperature and chemicals stopping the function of proteins. 5. Proteins have primary structure. If you are given a method to know which amino acid is at either of two termini (ends) of a protein, can you connect this information to purity or homogeneity of a protein?
Solution: There are several methods provided by several scientists to find out the sequence of amino acids. Frederick Sanger proposed Sanger’s reagent to know the amino acid sequence in a polypeptide chain.
Sanger used 1-fluoro 2, 4 dinitrobenzene (FD NB) to determine insulin structure. FDNB specifically binds with N-terminal amino acid to form a dinitrophenyl (DNP) derivative of peptide. This DNP- derivative peptide can be identified by chromatography. The identified sequence of amino acids shows the homogeneity of a protein molecule.

7. Explain the composition of triglycerides. jSfflTriacylglycerols (triglycerides) are the esters of glycerol with fatty acids.
Solution: They are insoluble in water and non-polar in character and commonly known as neutral fats. The neutral or depot fats are composed of carbon, hydrogen and oxygen like carbohydrates but have far fewer oxygen atoms than carbon atoms unlike the carbohydrates. 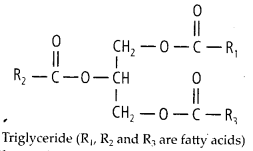 (i) Glycerol – A glycerol molecule has 3
carbons, each bearing a hydroxyl (-OH) group. .
(ii) Fatty acids – A fatty acid molecule is an unbranched chain of carbon atoms with each carbon atom (C) forming four bonds to other atoms. It has a carboxyl group- COOH at one end and hydrogen atom (H) bonded to all or most carbon atoms forming a hydrogen chain. The carbon- hydrogen bonds are non-polar. Therefore, the hydrocarbon chain does not dissolve in water. Because the carboxyl group contains the polar C = O and OFI groups. It tends to dissolve in water even though the rest of fatty acid molecule will not. Triacylglycerols of plants, in general, have higher content of unsaturated fatty acids as compared to that of animals.

8. Can you describe what happens when milk is converted into curd or yoghurt, from your understanding of proteins.
Solution: Milk is converted into curd or yoghurt due to denaturation of proteins. In denaturation, disruption of bonds that maintains secondary and tertiary structure leads to the conversion of globular proteins into fibrous proteins. This involves a change in physical, chemical and biological properties of protein molecules.

9. Can you attempt building models of biomolecules using commercially available atomic models (Ball and stick models).
Solution: Yes, models of biomolecules can be prepared using commercially available atomic models.
Ball and stick models and space filling models are 3D or spatial molecular models which serve to display the structure of chemical products and substances or biomolecules. With ball and stick models, the centers of the atoms are connected by straight lines which represent the covalent bonds. Double and triple bonds are often represented by springs which form curved connections between the balls. The bond angles and bond lengths reflect the actual relationships, while the space occupied by the atoms is either not represented at all or only denoted essentially by the relative sizes of the spheres.

11. Draw the structure of the amino acid, alanine.
Solution:

12. What are gums made of ? Is fevicol different ?
Solution: Gums are hetero-polysaccharides (poly-mers) of large number of different monosac-charide units. Yes, fevicol is a different kind of polymer. It is a synthetic sticky substance called resin which is manufactured by esteri-fication of organic compounds.

13. Find out a qualitative test for proteins, fats and oils, amino acids and test, any fruit juice, saliva, and urine for them.
Solution: Biuret test for protein : The biuret test is a chemical test used for determining the presence of peptide bonds. In a positive test, a copper II ion (Cu2+ ion) is reduced to copper I (Cu+) which forms a complex with the nitrogen and carbon of peptide bonds in an alkaline solution. A violet colour indicates the presence of proteins.
Ninhydrin test for amino acid: Ninhydrin (2,2 Dihydroxy indane-l,3-dione) is a chemical used to detect ammonia or primary and secondary amines. When reacting with these free amines, a deep blue or purple colour known as Ruhemann’s purple is evolved. Amino acid analysis of proteins is also done by ninhydrine. Most of the amino acids (including a-amino acids) are hydrolysed and reacted with ninhydrin except proline (a secondary amine). Amino acid containing a free amino group and a free carboxylic acid group reacts together with ninhydrin to produce coloured product. When the amino group is secondary, the condensation product is yellow. Solubility test for fats and oils : A positive solubility test for fats is that the fat dissolves in lighter fluid and not in water. In this test, 5 drops of fat or oil are added in two test tubes containing 10 drops of lighter fluid and 10 drops cold water respectively.
Fruit juice contains sugar so it cannot be tested by the above-mentioned tests. Saliva contains proteins, mineral salts, amylase etc., so it can be tested for protein and amino acids. Urine contains proteins, so it can be tested for it.

14. Find out how much cellulose is made by all the plants in the biosphere.
Solution: About 100 billion tonnes of cellulose is prepared per year by the plants of the world.