(a) What has Time been portrayed as? Why?
(b) What are the other symbols associated with Time?
Answer:
(a) Time has been portrayed as a mysterious man wearing a loose cloak with a scythe in one hand and an hour-glass in other. Time is shown to have been fleeting fast. Time is the greatest conqueror.
(b) Tides, bubble of water, wind, sand, money, etc.

Question 2.
(a) What are the things that last for centuries ? List a few things around you that will survive four to five hundred years into the future. 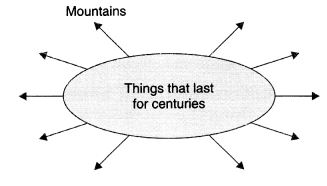 (b) Think of things that will perish and/or be forgotten with the passage of time.
Answer:

Question 4.
Answer the following questions briefly.
(a) Why do you think the rich and powerful people get monuments and statues erected in their memory?
Answer:
Rich and powerful believe that by erecting statues and monuments people will remember them even after their death. They do not realise that people will remember them for their deeds and not for huge structures. It is their pride and ego which makes them do all this.

(b) Describe how the monuments and statues brave the ravages of time.
Answer:
Monuments and statues remade of stone and cement which are strong and structures constructed with these can stay for centuries. They can withstand extreme weather conditions such as rain, storm, severe heat, etc.

(c) Why does the poet refer to Time as being sluttish?
Answer:
Time has been referred to as ‘sluttish’ because time waits for no one. It passes by. We have to learn to value time. Time treats everyone in the same way. It does not treat a rich and poor man differently. “Sluttish” can also mean whorish as time cares for no individual; it is immoral and will finally pass. The grand memorials will become eroded, and the people memorialised will eventually be forgotten.

(d) The poet says that neither forces of nature nor wars can destroy his poetry. In fact, even godly powers of Mars will not have a devastating effect on his rhyme. What quality of the poet is revealed through these lines?
Answer:
The poet is an optimistic individual. He has immense confidence in himself as well as in his ability to write poems which will be remembered till eternity. We also see his confidence in these lines- When marble statues topple and stone buildings and other “works of masonry” are destroyed, the poetry will live on.

Question 5.
Shakespeare’s sonnet has been divided into three quatrains of 4 lines each followed by a rhyming couplet. Each quatrain is a unit of meaning. Read the poem carefully and complete the following table on the structure of the poem.

(b) Use of personification

Praise has been shown as a person taking his place somewhere.