Question 2. What is the reason for the long run equilibrium of a firm in monopolistic competition to be associated with zero profit? [3 Marks]
Answer: Question 5. What is meant by prices being rigid? How can oligopoly behaviour lead to such an outcome? [3-4 Marks]
Answer:

I. Very Short Answer Type Questions (1 Mark)
Question 1. Define monopoly. [CBSE 2005, 09]
Answer: ‘Mono’ means single and ‘poly’ means seller, i.e., single seller. Monopoly is a market situation where there is a single firm selling the commodity and there is no close substitute of the commodity sold by the monopolist.

Question 2. Under which market form, firm is a price-maker?
Answer: Monopoly.

Question 4. How many firms are there in a monopoly market?
Answer: One firm.

Question 5. What is a price-maker firm? [AI 2012]
Answer: A price maker firm is one to fix the price itself because of its monopoly power.

Question 6. What does Monopolistic Competition mean?
Answer: It refers to a market situation in which there are many firms which sell closely related but differentiated products.

Question 9. In which form of market there is product differentiation? [CBSE 2005]
Answer: Monopolistic competition.

Question 10. Give the meaning of ‘Oligopoly’. [CBSE, Sample Paper 2010]
Answer: Oligopoly is a market situation in which an industry has only a few firms (or few large firms producing most of its output) mutually dependent for taking decisions about price and output.

II. Multiple Choice Questions (1 Mark)
Question 1. Which one of the following statement is not a characteristic of monopolistic competition?
(a) Ease of entry into the industry.
(b) Product differentiation.
(c) A relatively large number of sellers.
(d) A homogenous product.
Answer: (d)

Question 2. All of the following are characteristics of a monopoly except:———————–.
(a) There is a single firm.
(b) The firm is a price-taker.
(c) The firm produces a unique product.
(d) The existence of some advertising.
Answer: (b)

Question 5. In which form of the market structure is the degree of control over the price of its product by a firm very large?
(a) Monopoly
(b) Imperfect Competition
(c) Oligopoly
(d) Perfect competition
Answer: (a)

Question 6. Under which one of the following forms of market structure does a firm have no control over the price of its product?
(a) Monopoly
(b) Monopolistic competition
(c) Oligopoly
(d) Perfect competition
Answer: (d)

Question 7. Price discrimination will be profitable only if the elasticity of demand in different sub markets is:
(a) Uniform (b) Different
(c) Less (d) Zero
Answer: (b)

Question 8. Suppose that the demand curve for the XYZ Co. slopes downward and to the right. We can conclude that
(a) The firm operates in a perfectly competitive market.
(b) The firm can sell all that it wants to at the established market price.
(c) The XYZ Co. is not a price taker in the market because it must lower the price to sell additional units of output.
(d) The XYZ Co. will not be able to maximise profits because price and revenue are subject to change.
Answer: (c)

Question 9. One characteristic not typical of Oligopolistic industry is its:
(a) Horizontal demand curve.
(b) Too much importance to non-price competition.
(c) Price leadership.
(d) A small number of firms in the industry.
Answer: (a)

Question 11. Price discrimination is one of the features of
(a) monopolistic competition
(b) monopoly
(c) perfect competition
(d) oligopoly
Answer: (b)

Question 12. Pure oligopoly is based on the————– products.
(a) differentiated (b) homogeneous
(c) unrelated (d) None of these
Answer: (b)

Question 13. The firm and the industry are one and the same in————-.
(a) perfect competition
(b) monopolistic competition
(c) duopoly (d) monopoly
Answer: (d)

Question 3. Explain the feature of few firms in an oligopoly market. [AI 2012]
Answer:

Question 4. Explain the main features of barriers to the entry of firms. [AI 2013]
Answer:

Question 5. Give reasons for the following statements: Question 7. Give reasons for the following statements:

Question 9. What is meant by price rigidity, under oligopoly.[CBSE Sample Paper 2016]
Answer:

IV. TRUE OR FALSE
Giving reasons, state whether the following statements are true or false.
Question 1. Under monopoly all firms can sell at any price.
Answer: False: Under monopoly there is only one firm.

Question 2. In monopoly, firm is different from industry.
Answer: False: There is only one firm in monopoly market, so there exists no difference between firm and industry.

Question 3. Under monopoly new firms can enter the industry to raise the supply.
Answer: False: In monopoly, no other firm can enter into industry because of barrier created by monopoly firm. 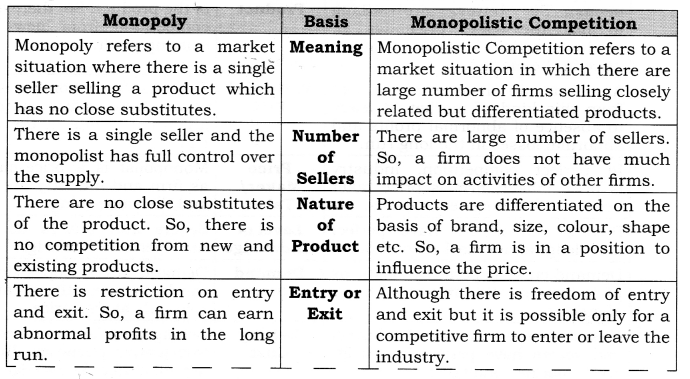 Question 4. What do you mean by duopoly? [1 Mark]
Answer: When there are only two firms producing a product, it is called duopoly. Under duopoly it is assumed that the product sold by the two firms is homogeneous and there is no substitute for it. It is a special case of oligopoly.

Question 7. What is the importance of monopoly? [1 Mark]
Answer: VII. Value Based Questions
Question 1. In spite of having monopoly why the Indian Railways has not increased the fare for many years? [1 Mark]
Answer:  Indian Railway is a major public sector undertaking and its main motive is social welfare not the profit. Value: Social welfare

Question 2. How to reduce the incidence of selling cost under monopolistic competition because of which price tends to be higher than what it would have been if production cost would have been the sole basis? [1 Mark]
Answer: The cost incurred on advertisement and salesmanship constitutes selling cost which affects the minds of buyers in favour of certain commodities. In this situation buyers should care for intrinsic value and utility. This way the role of selling cost will be reduced.
Value: Analytic

Question 3. Under oligopoly though firms are free to take decisions about price and quantity to be sold but they do not change the price and hence buyers are deprived of the benefit of fall in price. Comment. [I Mark]
Answer: Oligopoly firms are mutually dependent and therefore while fixing the price and the output they are guided by the reactions of other firms. As such price tends to be rigid and the consumers suffer.
Value: Critical thinking

VIII. Application Based Questions
Question 1. How the efficiency may increase if two firms merge? [3-4 Marks]
Answer:

Question 2. Selling cost is a nail in the coffin of consumer’s sovereignty. How? [3 Marks]
Answer:

Question 5. Price discrimination should be socially desirable. How? [1 Mark]
Answer: There should be an approach on the part of the Monopoly Firm to fix lower prices for poor people and backward areas for its product.

Question 6. If the firm in the toothpaste industry have the following market shares, which market structure would best describe the industiy? [1 Mark] Question 7. Suppose that the demand curve for the XYZ company slopes downward and to the right. Would you conclude that the firm is a price taker or a price maker? Give reasons. [3 Marks]
Answer:

Question 8. Because of product differentiation under monopolistic competition, price tends to be higher than what it ought to have been in real terms and hence consumers suffer. How? [3 Marks]
Answer: