• Dynamics is the branch of physics in which we study the motion of a body by taking into consideration the cause i.e., force which produces the motion.
• Force
Force is an external cause in the form of push or pull, which produces or tries to produce motion in a body at rest, or stops/tries to stop a moving body or changes/tries to change the direction of motion of the body.
• The inherent property, with which a body resists any change in its state of motion is called inertia. Heavier the body, the inertia is more and lighter the body, lesser the inertia.
• Law of inertia states that a body has the inability to change its state of rest or uniform motion (i.e., a motion with constant velocity) or direction of motion by itself.
• Newton’s Laws of Motion
Law 1. A body will remain at rest or continue to move with uniform velocity unless an external force is applied to it.
First law of motion is also referred to as the ‘Law of inertia’. It defines inertia, force and inertial frame of reference.
I here is always a need of ‘frame of reference’ to describe and understand the motion of particle, lhc simplest ‘frame of reference’ used are known as the inertial frames.
A frame of referent, e is known as an inertial frame it, within it, all accelerations of any particle are caused by the action of ‘real forces’ on that particle.
When we talk about accelerations produced by ‘fictitious’ or ‘pseudo’ forces, the frame of reference is a non-inertial one.
Law 2. When an external force is applied to a body of constant mass the force produces an acceleration, which is directly proportional to the force and inversely proportional to the mass of the body. Law 3. “To every action there is equal and opposite reaction force”. When a body A exerts a force on another body B, B exerts an equal and opposite force on A.
• Linear Momentum
The linear momentum of a body is defined as the product of the mass of the body and its velocity.

• Impulse
Forces acting for short duration are called impulsive forces. Impulse is defined as the product of force and the small time interval for which it acts. It is given by

Impulse of a force is a vector quantity and its SI unit is 1 Nm.
— If force of an impulse is changing with time, then the impulse is measured by finding the area bound by force-time graph for that force.
— Impulse of a force for a given time is equal to the total change in momentum of the body during the given time. Thus, we have

• Law of Conservation of Momentum
The total momentum of an isolated system of particles is conserved.
In other words, when no external force is applied to the system, its total momentum remains constant.

• Recoiling of a gun, flight of rockets and jet planes are some simple applications of the law of conservation of linear momentum. • Commonly Used Forces
(i) Weight of a body. It is the force with which earth attracts a body towards its centre. If M is mass of body and g is acceleration due to gravity, weight of the body is Mg in vertically downward direction.
(ii) Normal Force. If two bodies are in contact a contact force arises, if the surface is smooth the direction of force is normal to the plane of contact. We call this force as Normal force.

Example. Let us consider a book resting on the table. It is acted upon by its weight in vertically downward direction and is at rest. It means there is another force acting on the block in opposite direction, which balances its weight. This force is provided by the table and we call it as normal force.
(iii) Tension in string. Suppose a block is hanging from a string. Weight of the block is acting vertically downward but it is not moving, hence its weight is balanced by a force due to string. This force is called ‘Tension in string’. Tension is a force in a stretched string. Its direction is taken along the string and away from the body under consideration. 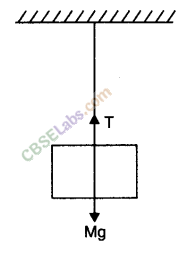 • Simple Pulley
Consider two bodies of masses m1 and m2 tied at the ends of an in extensible string, which passes over a light and friction less pulley. Let m1 > m2. The heavier body will move downwards and the lighter will move upwards. Let a be the common acceleration of the system of two bodies, which is given by • Angle of Repose
Angle of repose (α) is the angle of an inclined plane with the horizontal at which a body placed over it just begins to slide down without any acceleration. Angle of repose is given by α = tan-1 (μ) • Motion on a Rough Inclined Plane
Suppose a motion up the plane takes place under the action of pull P acting parallel to the plane.
• Centripetal Force
Centripetal force is the force required to move a body uniformly in a circle. This force acts along the radius and towards the centre of the circle. It is given by Let us consider a particle moving in a circular vertical path of radius V and centre o tide with a string. L be the instantaneous position of the particle such that Here the following forces act on the particle of mass ‘m’.
(i) Its weight = mg (verticaly downwards).
(ii) The tension in the string T along LO. We can take the horizontal direction at the lowest point ‘p’ as the position of zero gravitational potential energy. Now as per the principle of conservation of energy, When the particle completes its motion along the vertical circle, it is referred to as “Looping the Loop” for this the minimum speed at the lowest position must be √5gr
• IMPORTANT TABLES