Question 1.
Complete the introduction given below to the story The Story Teller by Saki (H.H. Munro), by using ‘a’ ‘art’ or ‘the’’:

You must have used a variety of articles in your answer. Why did you use them? Discuss the reasons with your teacher.
Answer:
For self-attempt.

Question 2.
Look at the numbers on the map, and match them with the names given in the box below: Question 2.1
An astronaut is speaking to the Mission Control from her capsule, describing geographical features she can see on Earth. Decide which features she is

talking about. Fill in the gaps in the astronaut’s description below. Use the names given in the box with the correct determiners (a, an, the). (The first two have been done for you):
“There is very little cloud cover at

Question 3.
Choose a suitable word from the options given and complete the story from Tunisia:

Question 3.1.
Based on your reading of the above story, answer the following questions:

Question 5.
Here are a few questions and statements written down by the Cultural Secretary that she/ he needs to share. Tick the correct words from those given in brackets:

Question 5.1
In pairs, study the completed sentences in 5 above. You will notice that words like a little and much go with certain nouns. Are these nouns Countable [C] or Uncountable [U]?
Answer:
These nouns are Uncountable (U). Write a short report on major exports from Medland this year compared with the last year.  Use words from the box above. Divide your report into two paragraphs as indicated:

Question 7.
In pairs, match A and B to produce likely phrases:

There is sometimes more than one sensible combination as in the example.

Question 7.1
Look at the pairs below. Draw a sketch to show the difference in meaning, as in the example:

(Words ending with one and body mean the same.)
Fill in the gaps with some of the words from the table above:

Question 9.
Both, all, neither, none

Question 9.1
Work in pairs and recognise how many words belong to each set. Complete the sentences as in the example. Use words only from the box above:

Question 9.2
(a) Write three similar quiz questions on a piece of paper as part of homework.
(b) Pairwork: Swap questions with your partner. Write the answers to your partner’s questions and return them to be marked by your partner.
Answer:
For self-attempt,

Read the following conversation:
Malavika and Deepak are looking through some photographs of Malavika’s family.

Improve the above conversation by using suitable pronouns where required.
Answer:
For self-attempt.

Question 10.1
Look at the passage below and study how the personal pronouns refer to different people:

Question 10.2
Now read this extract from a story and draw arrows (as in the example above) to show how the personal pronouns refer to the different people and things.
Answer: 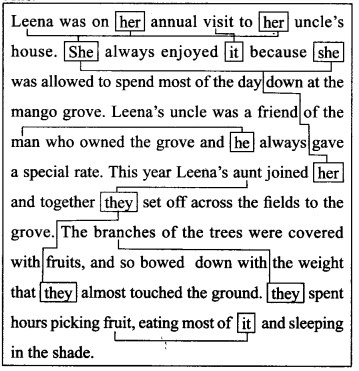