Question 1.
Read the following sentences. Each sentence has four words underlined. Select one underlined word that is incorrect and write it in the space provided. The first one has been done as an example: 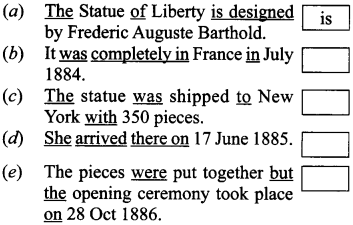 Question 2.
Choose the right word from the options given below and fill in the blank:

(a) Dr. Wangari Maathai was awarded the Nobel Peace prize in 2004.
(b) The award was in recognition of her service towards sustainable development.
(c) In 1989 she saved Nairobi’s Uhuni Park single-handedly.
(d) She is the founder of the Green Belt Movement which is an NGO.
(e) The Green Belt Movement works on various environmental issues at the grassroots level.
(f) Wangari Maathai has earned the title “Tree Mother of Africa”.

Question 4.
Look at the notes given below and complete the paragraph that follows by choosing the correct option from the choices given:

(a) (iii) known as Kamala Suraiyya
(b) (ii) a famous Indian writer
(c) (i) published her autobiography titled
(d) (iv) has been translated.