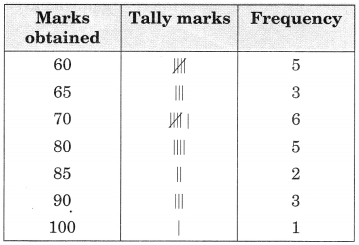 Question 3.
Mr. Rajan made a pictograph given below to show the number of cars washed at a car washing station during three days of a week.

Question 4.
Read the pictograph given below and answer the following questions:
Persons employed in one year Question 5.
In March 2012, children for six colonies of Meerut were given pulse polio Drops. The colony wise number of children were as follows: Question 6.
The given bar graph represents the frequency of a, e, i, o, and u in a piece of English writing. Question 7.
The marks obtained by six students in Mathematics are given below. Represent the. data by a bar graph. Use a scale of 0.5 cm for each name on the horizontal axis and 0.5 cm for 10 marks on the vertical axis. Solution:
The required bar graph is given as below: