Meaning and Objectives of Planning
Planning is a process of setting objectives and deciding how to accomplish them. Planning in sports is required because there is a definite time frame for achieving the objectives and the resiilts are also known very clearly and in definite terms.
Objectives of planning are given below.

Various Committees and their Responsibilities

Tournaments
A tournament is a competition held among various teams in a particular activity according to a fixed schedule where a winner is decided.
There are various methods for organising a tournament which depends upon various factors such as 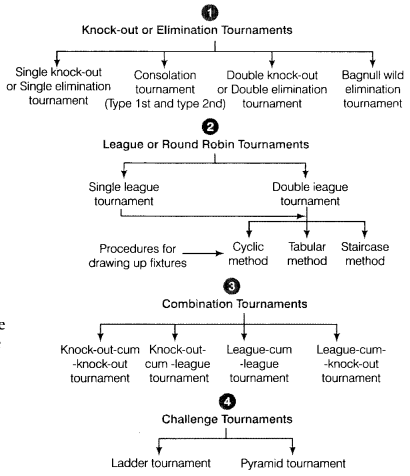 Note We will cover in detail the first three tournaments because these three tournaments are included in syllabus.
Bye is a privilege given to a team which is decided generally by seeding it or by draw of lots.
Advantages of Knock-out Tournaments

Fixture is the process of arranging the teams in systematic order in various groups for competition in a physical activity. In other words, it is the set-up of various teams for competitive matches where they play in a systematic order as per the fixture schedule. The success of a tournament depends upon planning of suitable fixture. Tournaments are played in various forms of fixtures.

Fixtures in Knock-out Tournament
In a knock-out tournament, the fixtures are drawn by the following methods
1. Seeding Method
Seeding is a procedure by which good teams are placed in fixtures in such a way that stronger teams do not meet each other at the very start of a tournament. It is done to overcoine the drawbacks of a single knock-out tournament. Seeding can be done only if the standards of the teams are known before the start of the tournament. The draw may result between the strong competitors at early level competition, so they are ‘seeded’ to prefvent this.

Thus, the top competitors will not meet until the quarter final, semi final or final round. Seeding is used to ensure that-players or teams of recognised outstanding abilltytlo not confront each other in the early rounds. It represents the tournament committee’s subjective rating of the various players, and chances of winning the tournament.

Special Seeding
It is a method of seeding in which the players or teams directly participate in the quarter final or semi-final matches thus avoiding their participation in the initial rounds.

2. Bye Method
Bye means the avoiding of playing a match in the first round of the tournament. It is a privilege given to a team which is decided generally by seeding it or by draw of lots. Some teams may get bye in first round, by which they get promoted to higher round competition.

This may be given as a reward for their some previous achievements. Byes can be applied equally to single person competitions and team sports as well as to single game eliminations and best of series elimination. Byes are given in 1st round only. The number of byes that should be given in a tournament is decided by finding the difference between the number of teams and the next power of two.
Example : (N – 1) if 20 teams are participating, then 19 matches (20 – 1) =19 will be played.

Method of Drawing Fixtures in Knock-out Tournament
In order to draw fixtures in a knock-out tournament, following things are essential to calculate

2. Number of Rounds It means the total number of rounds that should be played during the tournament. Rounds will include the initial rounds, quarter finals, semi finals and finals. If the number of teams is a power of 2, then number of rounds will exactly be multiple of 2 up to that number.
Example :

If number of teams is not a power of 2, then number of rounds will be equal to the multiple of next power of two.
Example :

Examples
Example 1 A fixture of 19 teams on knock-out basis. Team number 1,2, 11 and 12 do not play the match initially as they get special seeding.

Note We will cover in detail the first two methods because these two methods are included in syllabus. Deciding the Winner
The method to decide the winner in the tournaments is by calculating the percentage of matches won.
\(percentage=\frac { MatchesWon }{ MatchesPlayed } \times 100\)

1.5 Intramurals
The word intramural is derived from the Latin words intra and muros, which means ‘within walls’. The teams compete within the walls of the institution e.g. inter-class or inter-house tournament within an institution.
The objectives of intramurals are as follows

1.6 Extramurals
This encloses the activities which are performed outside the walls of the institution or school. It means that students of two or more schools participate in such competitions.
The objectives of extramurals are

Significance of extramurals are as follows

1.7 Specific Sports Programmes
Specific sports programmes are those which are not usually related to competitions. The programmes have various objectives like creating awareness, creating a sense of integration among people and raising funds for charitable organisations. Some of these programmes are Sports day. Run for fun, Health run, Run for specific cause. Run for unity and Run for awareness.