1. Choose the right answer from the four alternatives given below:

Question 1.(i)
Which one of the following continents has the highest growth of population?
(a) Africa
(b) South America
(c) Asia
(d) North America
Answer:
(a) Africa

Question 1(iii)
Which one of the following is not a push factor?
(a) Water shortage
(b) Medical/educational facilities
(c) Unemployment
(d) Epidemics
Answer:
(d) Epidemics

2. Answer the following questions in about 30 words:

Question 2.(i)
Name three geographical factors that influence the distribution of population:
Answer:

Question 2.(ii)
There are a number of areas of high population density in the world. Why does this happen?
Answer:
The areas with high population density across the world have at least one or usually multiple factors favorable for the settlement of population. Wherever people found conducive conditions for living, they have been settling there. With passage of time and growth of population, these areas became regions of thick population density. For example, the regions with availability of water, good climate, presence of minerals and other resources, of religious or cultural significance became regions of thick population. Example: Ganga-Yamuna Doab, Mediterranean regions.

Question 3.(i)
Distinguish between Birth rate and Death rate:

4. Answer the following questions in about 150 words:

Question 4.(ii)
Discuss the three stages of demographic transition.
Answer:
Demographic transition theory can be used to describe and predict the future population of any area. The theory tells us that the population of any region changes from high births and high deaths to low births and low deaths as a society progresses from rural, agrarian and illiterate to urban, industrial and literate society. These changes occur in stages, which are collectively known as the demographic cycle.

The first stage has high fertility and high mortality rates because people reproduce more to compensate for the deaths due to epidemics and variable food supply. Population growth is slow and most people are engaged in agriculture where large families are an asset. Life expectancy is low; people are mostly illiterate and have low levels of technology. Two hundred years ago all the countries were in this stage.

In the second stage, fertility remains high in the beginning, but it declines with time. This is accompanied by reduced mortality rate. Improvements in sanitation and health conditions lead to decline in mortality. Because of this gap the net addition to population is high. This results in population explosion. Eg. Countries like India.

In the last stage, both fertility and mortality decline considerably. The population is either stable or grows slowly. The population becomes urbanized, literate and has high technical know how and deliberately controls the family size. Some countries even face negative growth of population, E.g., many Western European countries. Question 6.
Name two areas with <1 person/sq. km.
Answer:
North and South Poles and hot and cold deserts of the world.

Question 11.
What is population doubling time?
Answer:
Time takes for a region to double it’s population at the current growth rate.

Question 15.
What is the world’s and India’s doubling time of population?
Answer:
World : 37 Years and India : 36 years.

Question 17.
What is meant by family planning?
Answer:
Family planning is the spacing or preventing the birth of children.

Question 19.
Mention the names of areas where density of population is very low.
Answer:

Question 20.
What is the impact of migration?
Answer:
Migration changes the size of population of an area by either addition (due to immigration) or subtraction (due to emigration) in the number of people.

Question 4.
How did science and technology help in population growth?
Answer:
Steam engine replaced human and animal energy and also provided mechanized energy from other sources and helped in increasing agricultural and industrial production. Improvement in medical facilities, inoculation against epidemics and sanitation helped in the decline of death rate.

Question 5.
What are the impacts of population change?
Answer:
A small increase is beneficial for a growing economy. But growth beyond the carrying capacity of land create problems. Resource depletion is the most serious of all the problems.Population decline also indicate that the resources are insufficient to support the population of an area which it had done earlier.

Question 6.
What was Thomas Malthus’s theory?
Answer:
Thomas Malthus in his theory (1793) stated that the number of people would increase faster than the food supply. Any further increase would result in population crash caused by disease, famine, and war. Preventive checks are better than physical checks. For future sustainability world population need to be controlled.

Question 7.
Which areas of the world have high density of population?
Answer:
Fertile plains with favorable climate and highly industrialized and urbanized areas are densely populated. There are four areas where density is more than 200 persons per sq. km. They are:

Question 1.
What is the trend in growth of population over the years in the world?
Answer:
The world population attained its present strength over centuries. It grew very slowly in the early periods. About 8000 – 10000 years ago, after the introduction of agriculture the size of population was around 8 million.

In the 1st centuries it was below 300 million. The 16th and 17th centuries set the stage for growth of population with expanding trade. The 2nd most significant cultural change that impacted the growth of population came around the 1750 in the dawn of ‘Industrial Revolution’ with approx 550 million population. It exploded after the industrial revolution in the 18th century. The 3rd major cultural and technological change that influenced the population growth came in the 20th century through ‘Medical Revolution’ – which drastically brought down the ‘death rate’ with the introduction of several life saving drugs and improved medical facilities through better connectivity and paved the path for rapid population growth.

Question 3.
What is Demographic Transition? Explain the stages of demographic transition theory with examples.
Answer:
The Demographic Transition Theory gives us the relationship between the level of economic development of a country and its demographic characteristics. It mentions the transition of a society from a phase of high fertility and mortality to a phase where both come down to low and the countries move from primitive agricultural, illiterate and rural economy to a modern industrial, literate and urban state. Initially, there were three stages of the theory—Underdeveloped stage, Developing stage and Developed stage.

Stage-1: Stage of slow population growth. This stage was marked by both high birth rate and high death rates. So population growth rate was very low. Agriculture oriented activities depended on the vagaries of nature leading to low productivity. Society was highly illiterate with poor technology. Large families with high birth rates were the norms as they had to compensate the high death rate. About a couple of centuries back all the economies were at this stage of demographic transition.

Stage-2: Stage of the beginning of Industrial Revolution. With betterment economic conditions and living standards, this stage started with improvement of medical facilities, sanitation and as a result death rate went down but birth rate remained high initially. This gave rise to a sudden increase in population which is common in a developing economy.

Though both of them were falling, the rate of fall in death rate was much faster than that of birth rate – creating a wide gap between them – which in turn gave rise to sharp increase in population, often termed as population explosion triggered by the better medical facilities and food supply. Stage-3: Stage of late Industrial Revolution and urban state.

Typically characterized by low and stable growth rate of population. This stage is marked with a decline in birth rate along with a steady decrease in death rate. The mortality rate gets very low and stabilizes. This Demographic Transition theory clearly shows how an economy changes from an agrarian, illiterate rural state with high birth rate, and Death rate to an industrial, literate and urban state with low Birth rate and Death rate through technological innovations and medical improverhents.

Question 4.
What are the repercussions of population increase? What are the population control measures?
Answer:
A small increase in population is desirable in a growing economy but uncontrolled population growth leads to numerous problems mainly on the limited resources.

Thomas Malthus in his theory (1793) stated that the number of people would increase faster than the food supply. Any further increase would result in population crash caused by disease, famine and war. Preventive checks are better than physical checks. For future sustainability world population need to be controlled.

An increasing population if in a desirable proportion, has the following positive impacts: Question 1.
Study the given map and answer the following questions: 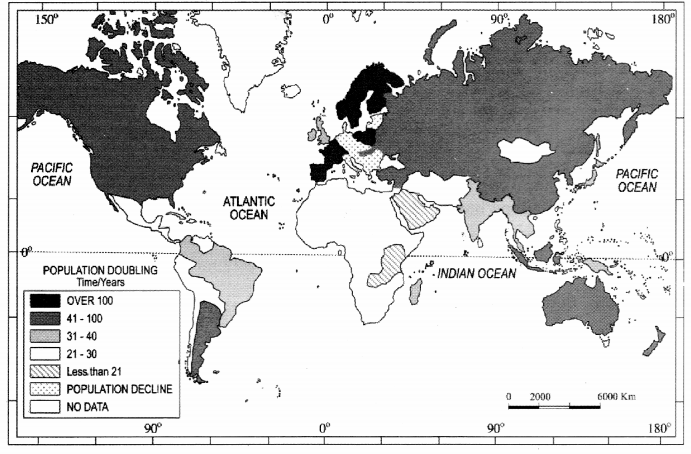 Question 2.
Study the given map and answer the following questions: 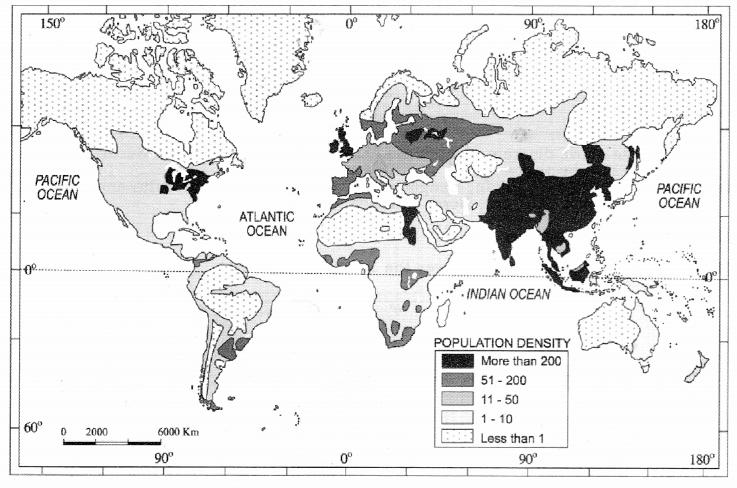 Question 2.
Which continent has the highest growth rate of population? (CBSE 2011)
Answer:
Africa.

Question 3.
Which parts of U.S.A and Europe have density more than 200 persons- per sq. km? (A.1.2011)
Answer:
Eastern part of USA and North Western Part of Europe.

Question 3.
Explain the trends in population growth of the world with special reference to the help of science and technology. (CBSE 2015)
Answer:
Population on the earth is more than 6 billion. It has grown to this size over centuries. Population of earth grew slowly in early period. It is during last few hundred years’ population has increased at an alarming rate. The steam engine replaced human and animal energy. They provided mechanized . energy of water and wind. This increased agricultural and industrial production. Inoculation against epidemics and other communicable diseases, improvement in medical facilities and sanitation contributed to a rapid decline in death rates throughout the world.

Question 4.
Explain any three ‘push’ and any two ‘pull’ factors that influence the migration of population in the world. (CBSE 2016)
Answer:
People migrate for a better economic and social life. There are two sets of factors that influence migration. The Push factors make the place of origin seem less attractive for reasons like unemployment, poor living conditions, political turmoil, unpleasant climate, natural disasters, epidemics and social-economic backwards. The Pull factors make the place of destination seem more attractive than the place of origin for reasons like better job opportunities and living conditions, peace and stability, security of life and propery and pleasant climate.

Question 5.
How is the mortality rate of a region affected? Explain any four push factors responsible for emigration. (CBSE 2015)
Answer:
Death rate plays an active role in population change. By and large mortality rates are affected by the region’s demographic structure, social advancement and levels of its economic development.
The following push factors make the place of origin seem less attractive: