Question 5.
Name two metal objects which have a coating of another metal.
Answer:
Handlebars of bicycles, bathroom taps.

Question 6.
What do we get on electrolysis of acidified water?
Answer:
Hydrogen and oxygen gas.

Question 7.
Is air a bad or good conductor?
Answer:
A bad conductor.

Question 8.
Which metal is plated on handle bars of cycles and rim of wheels?
Answer:
Chromium

Question 9.
What is the full form of LED?
Answer:
Light Emitting Diode.

Question 11.
Which part of an atom is responsible for flow of current?
Answer:
Electron

Question 15.
How is conductivity of liquids tested?
Answer:
By using a tester.

Question 18.
Why is a layer of zinc coated over iron?
Answer:
To prevent iron from corrosion and rust.

Question 19.
Will the solution of sugar in distilled water conduct electricity?
Answer:
No

Question 20.
Why is tin electroplated on iron to make cans used for storing food?
Answer:
Tin is less reactive than iron. Tin coating prevents food from coming in contact with iron and thus pre¬vents it from getting spoiled or corroded.

Question 21.
Why we ifse chromium electroplating on taps and bars of bicycle instead of silver and gold?
Answer:
Silver and gold are very expensive comparatively to chromium.

Question 22.
What type of effect of current do the deposits of metal on electrodes show?
Answer:
Chemical effect

Question 24.
Which effect of current causes the bulb to glow?
Answer:
Heating effect

Question 25.
Which part of the bulb glows?
Answer:
Filament

Question 27.
How can the magnetic effect of current be checked?
Answer:
By using magnetic compass.

Question 28.
What do we see when the compass needle is brought near a wire in which current is flowing?
Answer:
The needle deflects.

Question 29.
What is electroplating?
Answer:
Deposition of thin layer of a metal over other metal by electrolysis is called electroplating.

Question 2.
How is the conductivity of liquids tested?
Answer:
The free ends of the tester is dipped in the liquid. If the bulb glows, the liquid is said to be a conductor. If not, it is an insulator. Question 4.
What is an LED? Why is it preferred to other type of bulbs?
Answer:
The electric device which is used in the tester instead of bulb is an LED. Its full form is Light Emitting Diode.
It is preferred to other bulbs as it can glow even when weak or less current flows through it.

Question 5.
Explain the conductivity of water.
or
Normal water conducts electricity while the pure or distilled water does not. Explain why?
Answer:
Normal water that we get from sources such as taps, handpumps, wells, ponds, etc., is not pure. It may contain several salts dissolved in it naturally. This water is thus good conductor of electricity. The pure or distilled water is free of salts and is a poor conductor.

Question 7.
What is electroplating? What are its uses?
Answer:
The process of depositing a layer of any desired metal on another material by means of electricity is called electroplating.
Electroplating is a very useful process. This is used to make objects appear shiny and resistant to scratches. It prevents corrosion.

Question 13.
Why is chromium used for electroplating? Why the objects have chromium plating are not made of chromium itself?
Answer:
Chromium has a shiny look. It does not get corroded and it resists scratches. Chromium is however expensive and it may not be economical to make the whole object out of it. So the object is made from a cheaper metal and only a coating of chromium is done over it.

Question 14.
Which metals, except chromium, are used for electroplating other metals?
Answer:
Jewellery makers electroplate silver and gold on ornaments of less expensive metals.
Tin cans, used for storing food, are made by electroplating tin onto iron. Tin is less reactive than iron. Hence, food is protected from getting spoilt.
Iron used in bridges and automobiles is coated with zinc to protect them from corrosion and formation of rust.

Question 2.
With the help of a suitable diagram, explain electrolytic refining of copper.
Answer:
To purify copper, a thin plate of pure copper and a thick rod of impure copper are used as electrodes in the acidified solution of CuS04. Pure copper is used as cathode and impure copper is used as anode. When electric current is passed through the copper sulphate solution, copper sulphate dissociates into copper and sulphate. The free copper gets drawn to the electrode connected to the negative terminal of the battery and gets deposited on it. From impure copper electrode, an equal amount of copper gets dissolved in the solution. Thus, the loss of copper from solution is restored and the process continues. The impurities are left behind at anode. Electroplating is a very useful process. It is widely used in industry for coating metal objects with a thin layer of a different metal. The layer of metal deposited has some desired property, which the metal of the object lacks. For example, chromium plating is done on many objects to make them shiny and attractive.

Question 4.
Suppose you want to deposit silver on an iron spoon using silver nitrate as electrolyte. Which terminal of the battery you should connect the spoon? What material should the other electrode be made of?
Answer:
Silver ion is positively charge, so the spoon must be connected to negative terminal to deposit silver on it. The other electrode should be made of silver.

Question 1.
Yakub made an circuit as shown in the figure. He observed that the bulb did not glow but on bringing a compass needle near it shows deflection.
He was quite confused that if current is flowing through the circuit then why the bulb is not glowing. Meanwhile his friend Sourav arrived and suggested him to add one more cell in the circuit. The bulb, then started glowing. 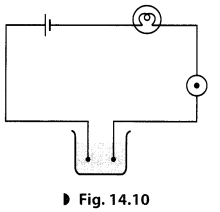 (a) Define a circuit.
(b) What does the deflection of a compass needle shows?
(c) Why the bulb did not glow in the first case but glow in the second case?
(d) What value of Sourav is shown here?
Answer:
(a) Circuit is a closed path through which an electric current flows.
(b) Deflection of compass needle shows that the current is flowing in the circuit. It is magnetic effect of current.
(c) The current flowing through the circuit in first case was too low to make the bulb glow but on adding a cell in the second case makes the bulb glow.
(d) Sourav is an intelligent, helpful, analytical and with scientific aptitude.

Activities and Projects
Question 1.
Test the conduction of electricity through various fruits and vegetables. Display your re¬sults in a tabular form.
Answer:
Do it yourself.

Question 2.
Repeat Activity 14.7 with a zinc plate in place of the copper plate connected to the negative terminal of the battery. Now replace zinc plate with some other metallic object and again repeat the activity. Which metal gets deposited over which other metal? Discuss your findings with your friends.
Answer:
When zinc plate is taken as negative electrodes copper ions are deposited on zinc plate.
Similarly, the copper ions will be deposited on the plate taken as negative electrode. The process is known as electroplating.

Question 4.
Imagine that you are an ‘entrepreneur’ and have been provided a loan by a bank to set up a small electroplating unit. What object would you like to electroplate and for what purpose? (Look up the meaning of‘entrepreneur’in a dictionary).
Answer:
You can select the objects of your own choice and interest like electroplating jewellery items with gold and silver, wheel rims of vehicles with nickel, etc. It will make the objects shiny, attractive and durable.

Question 6.
You can make a fun pen for yourself. Take a conducting metal plate and spread a moist paste of potassium iodide and starch. Connect the plate to a battery as shown in Fig. 14.7. Now using the free end of the wire, write a few letters on the paste. What do you see? For more information on this topic visit:
electronics.howstuffworks.com/led.htm
Answer:
Do it yourself at home.

I. Multiple Choice Questions (MCQs)
Choose the correct option.
Question 1.
Which of the following is a bad conductor of electricity?
(a) Distilled water
(b) Silver nitrate
(c) Sulphuric acid
(d) Copper sulphate

Question 2.
Which of the following does not conduct electricity?
(a) Sugar solution
(b) Vinegar solution
(c) Lemon juice solution
(d) Caustic soda solution

Question 3.
An electric current can produce
(a) heating effect
(b) chemical effect
(c) magnetic effect
(d) all of these

Question 5.
Which of the following is a good conductor?
(a) Brick
(b) Steel
(c) Plastic
(d) Cotton

Question 10.
An electrolyte is
(a) a metal
(b) a liquid that conducts current
(c) a non-metal
(d) none of these

Question 12.
Which is not a non-electrolyte?
(a) Ethyl alcohol
(b) Sodium chloride
(c) Urea
(d) Sodium solution

Question 15.
Which of the following is not used for electroplating metal articles?
(a) Nickel
(b) Silver
(c) Chromium
(d) Sodium IV. True or False
State whether the given statements are true or false.
1. Rubber is a good conductor of electricity.
2. Plastics are poor conductor of electricity.
3. All liquids conduct electricity.
4. Distilled water is free of salt.
5. Pure water conducts electricity.
6. Most liquids that conducts electricity are solutions of acids, bases and salts.
7. Electroplating is based on magnetic effect of electricity.
8. Small amount of some mineral salts are naturally present in water.
9. Chromium is carcinogenic.
10. An electric bulb glows due to chemical effect of electricity.
11. Distilled water when mixed with salt conducts electricity.
12. LED is an electric bulb which is used in a tester.
13. Deflection in compass needle is due to magnetic effect of current.
14. When electric current is passed through the copper sulphate solution, copper and sulphate ions are dissociated.
15. In an LED bulb, the shorter lead is connected to the positive terminal of the battery.
16. Electric current produces a magnetic effect.
17. Some liquids are good conductors of electricity and some are poor conductors of electricity.
18. Chromium has a shiny appearance.
19. Jewellery makers electroplate silver and gold on expensive metals.
20. Electroplating wastes are useful to human health and environment.
Answer:
1. False
2. True
3. False
4. True
5. False
6. True
7. False
8. True
9. True
10. False
11. True
12. True
13. True
14. True
15. False
16. True
17. True
18. True
19. False
20. False