Question 10.
Read the following passage and answer the question that follows : [1 + 3 = 4]
Dr. Khushdeva Singh describes his work as “humble efforts I made to discharge my duty as a human being to fellow human beings.”
“Love is stronger than hate.” How true is this value which was proved at the time of the partition of India ? What are the values one needs to instill and nurture to avoid hatred ? Explain.
“The Revolt of 1857 marked first nationalist challenge to the English in India.” Explain giving examples the values imbibed and practised by the rebels to set the beginning for it.
Answer:
This value is true as historians have discovered numerous stories of how people helped each other during the partition.
For e.g, Dr. Khushdeva Singh won the hearts of people of different communities by his service to them.
The values one needs to instill and nurture to avoid hatred are :

Question 11.
“The Salt March of 1930 was the first event that brought Mahatma Gandhi to world attention”. Explain the significance of this movement for Swaraj. [8]
Answer:
Salt March of Gandhiji:
(i) On 12th March, 1930 Gandhiji began the march from Sabarmati and broke the Salt Law by making salt at Dandi and broke the monopoly of the salt.

(ii) Parallel salt marches and protests were also conducted in other parts of the country. Peasants, factory workers, lawyers, students and local officials joined the march.

(iii) During the march Gandhiji told the upper castes that if they want Swaraj they must serve untouchables. Hindus, Muslims, Parsis and Sikhs have to unite and these are the steps towards Swaraj.

(iv) The salt march of Gandhiji was reported in the American news magazine, Time. In its 1st report on the march the magazine was deeply sceptical of the salt march reaching its destination. But shordy it changed its view and saluted Gandhi as a ‘saint’ and statesman.

(v) Salt march was notable for three reasons: Firstly, this event brought Gandhiji to world attention. It was widely covered by the European and American Press.

Secondly, it was the 1st nationalist activity in which women participated in large numbers. Kamaladevi Chattopadhyay the socialist activist persuaded Gandhiji not to restrict the protest to men alone. She herself courted arrest by breaking salt and Liquor Laws.

Thirdly, the most significant aspect of the Salt March was that it forced the British the realization that their Raj would not last forever, and they would have to devolve some power to the Indians.

(vi) To that end British Government convened a series of Round Table Conferences in London. First meeting was held in Nov. 1930 without any pre-eminent political Indian leader and was futile. When Gandhiji was released from jail in Jan. 1931, many meetings were held with the Viceroy and it culminated in the ‘Gandhi-Irwin Pact’ by which civil disobedience would be called off and all prisoners were released and salt manufacture allowed along the coast. Gandhiji represented the congress at Second Round Table Conference at London.

Question 15.
Read the following paragraph carefully and answer the questions that follow:
“Proper” social roles
Here is a story from the Adi Parvan of the Mahabharata :
Once Drona, a Brahmans who taught archery to the Kuru princes, was approached by Eklavya, a forest-dwelling nishada (a hunting community). When Drona, who knew the dharma, refused to have him as his pupil, Eklavya returned to the for-est, prepared an image of Drona out of clay, and treating it as his teacher, began to practise on his own. In due course, he acquired great skill in archery. One day, the Kuru princes went hunting and their dog, wandering in the woods, came upon Eklavya. When the dog smelt the dark nishada wrapped in black deer skin, his body caked with dirt, it began to bark. Annoyed, Eklavya shot seven arrows into its mouth. When the dog returned to the Pandavas, they were amazed at this superb display of archery. They tracked down Eklavya, who introduced himself as a pupil of Drona.

Drona had once told his favourite student Arjuna, that he would be unrivalled amongst his pupils. Arjuna now reminded Drona about this. Drona approached Eklavya, who immediately acknowledged and honoured him as his teacher. When Drona demanded his right thumb as his fee, Eklavya unhesitatingly cut it off and offered it. But, thereafter when he shot with his remaining fingers, he was no longer as fast as he had been before. Thus, Drona kept his word : no one was better than Arjuna.
(15.1) Why did Drona refuse to have Eklavya as his pupil ? [2]
(15.2) How did Eldavya react to the demand of his Guru ? [2]
(15.3) Mention two versions of Guru-Shishya Parampara mentioned in the given extract. [3]
Answer:
Source Based Question:
(15.1) Guru Drona refused to have Eklavya as his pupil because :

Question 16.
Read the following paragraph carefully and answer the questions that follow:
The Child Sad
This is perhaps one of the most poignant descriptions by Bernier:
At Lahore, I saw a most beautiful young widow sacrificed, who could not, I think, have been more than twelve years of age. The poor litde creature appeared more dead than alive when she approached the dreadful pit: the agony of her mind cannot be described; she trembled and wept bitterly; but three or four of the Brahmans, assisted by an old woman who held her under the arm, forced the unwilling victim toward the fatal spot, seated her on the wood, tied her hands and feet, lest she should run away, and in that situation the innocent creature was burnt alive. I found it difficult to repress my feelings and to prevent their bursting forth into clamorous and unavailing rage …
(16.1) Why did Bernier consider this treatment as a crucial marker of the difference between western and eastern societies ? [3]
(16.2) What role did the Indian patriarchal society play towards this social evil ? [2]
(16.3) Compare the condition of the women of the era mentioned above to that of today. [2]
Answer:
(16.1) Bernier considered this treatment as a crucial marker of difference between western and eastern society because :

Question 17.
Read the following paragraph carefully and answer the questions that follow :
“British element is gone but they have left the mischief behind”.
Sardar Vallabh Bhai Patel said :
It is no use saying that we ask for separate electorates, because it is good for us. We have heard it long enough. We have heard it for years, and as a result of this agitation we are now a separate nation… Can you show me one free country where there are separate . electorates ? If so, I shall be prepared to accept it. But in this unfortunate country if this separate electorate is going to be persisted in, even after the division of the country, woe betide the country; it is not worth living in. Therefore, I say, it is not for my good alone, it is for your own good that I say it, forget the past. One day, we may be united … The British element is gone, but they have left the mischief behind. We do not want to perpetuate that mischief. (Hear, hear). When the British introduced this element they had not expected that they will have to go so soon. They wanted it for their easy administration. That is all right. But they have left the legacy behind. Are we to get out of it or not ? (CAD, VOL.V)
(17.1) Why are separate electorates considered as a mischief ? [2]
(17.2) State the arguments given by Sardar Vallabh Bhai Patel for building political unity and forging a nation. [3]
(17.3) How did the philosophy of separate electorates result in a separate nation ?
[2]
Answer:
(17.1) Separate electorate was considered as a mischief :

Question 18.
(18.1) On the given political outline map of India, locate and label the following with appropriate symbols : [2]
(a) Dholavira
(b) Agra—the capital city of Mughals 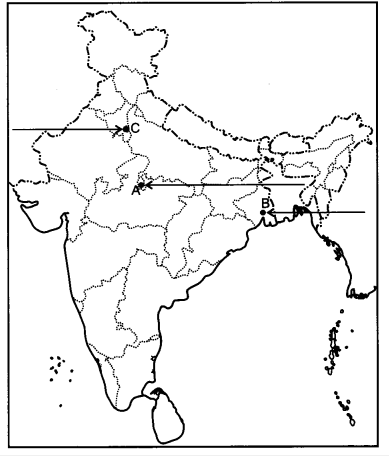 (18.2) On the same outline map of India, three centres related to the Revolt of 1857 have been marked as A, B and C. Identify them and write their correct names on the lines drawn near them. [3]
Answer: Question 1.
How were the coins used in the first century CE ? Give two examples. [2]
Answer:

Question 1.
How did Kushana rulers exemplify themselves with the high status ? [2]
Answer:
Kushana Rulers :

Question 2.
“The message of Guru Nanak Devji was based on divinity.” Mention any two aspects of it. [2]
Answer:
Guru Nanak Dev’s Divinity: