Question 4.
Why does gathering have little chance of becoming important at the global level ? Explain
one reason. [1]
Answer:
In early stage of human civilisation, they were greatly influenced by nature around them and
were living on Gathering. Thus, the primitive man was completely dependent on natural environment.

Question 5.
With the passage of time, human started understanding their environment, hence going back to gathering has very little chance.
Answer:
Differences between “node” and “link” are:

Question 6.
Classify rainfed farming on the basis of adequency of soil moisture during cropping season.
Rainfed farming is classified to “Dryland Farming” and “Wetland Farming”. Farming in areas with less than 75 cm annual rainfall is known as dry land farming and areas receiving more than 75 cm are called wet land or rainfed agriculture.

Question 7.
‘The Volga is one of the most developed inland water-ways in Russia”. Justify. [1]
Answer:
The Volga Inland waterways of Russia, is very famous waterway because :

Question 8.
Study the map given below carefully and answer the questions that follow : [1+2=3] Question 10.
Study the given diagram carefully and answer the questions that follows:

Question 10.2.
Explain any two reasong responsible for the increasing trend in that category. [3]
Answer:
Reasons for increase in use of areas under non-agricultural use :

Question 15.
Why do large scale industries choose different locations ? Explain any four factors which influence the industrial location. [1 + 4 = 5]
Answer:
Industries are established for production of various item with a view that they want to earn profit by reducing costs. Therefore, industries are located at points where cost of production is lowest. Factors influencing industrial locations :

Question 20.
“Scarcity of water on account of its increased demand, possesses possibility the greatest demand in India.” Analyse the statement. [5]
Answer:
Increasing demand for water is a challenge of India. The reasons are :

Question 21.
Identify the five geographical features shown on the political outline map of the world as A, B, C, D and E and write their correct names on the lines marked near them with the help of following information [5] (A) A large country of Europe in area.
(B) An area of subsistence gathering.
(C) The terminal station of a ‘trans-continental railway’.
(D) A major sea-port.
(E) An international airport.
Answer: Question 3.
Which is the apex body responsible to improve the quality of roads at national level in India ?
[1]
Answer:
The National Highway Authority of India (NHAI) with its head office in New Delhi, is the apex body for highways.

Question 17.
What is the meaning of density of population ? Examine the four geographical factors that influence the distribution of population in the world with suitable examples. [1 +4 = 5]
Answer:
Meaning of Population Density : The ratio between the number of people to the size of the land/area of state. The number of people inhabiting per unit of land is called population density. As per census 2011′, Bihar is most densely populated state with 1106 persons per square km, followed by West Bengal with 1028 persons. Arunachal Pradesh has least density with only 17 person per sq. km. Geographical factors that influence the populations distribution in the world :

Question 17.
What is age structure ? Interpret with example the triangular shaped age-sex pyramid. [5] Answer:
Age structure is the number of people of different age group.
(i) Generally the population is categorised into three broad age groups :
(a) children,
(b) adults and
(c) aged 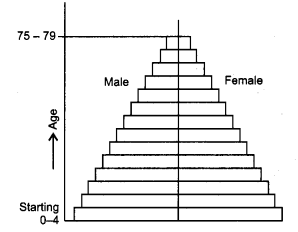 (ii) Most countries of Africa, Asia and Latin America have high birth rate and they have large size population in the lower age group. Countries having low birth rate and high life expectancy have more people in old age groups.
(iii) If we draw a triangular shaped pyramid having wide base and taper top this is a typical diagram to show age and sex structure of populations. The base and apex represent youngest and oldest age groups respectively.
(iv) This triangular pyramid is typical of less developed countries like Nigeria in Africa, Bangladesh in Asia and Mexico in south America.
(v) Wide base means high birth rates.
(vi) Tapered top indicates high death rates.