Question 1.
Give the meaning of ‘Crude Birth Rate’ (CBR). [1]
Answer:
The crude birth rate is the number of live births per 1,000 people per year. We can calculate CBR by the following formula :
CBR = Bi/P multiplied by 100 where Bi denotes live births during the year.
P is the mid year population of the area.

Question 2.
How is sex ratio calculated in different countries of the world ? [1]
Answer:
Sex ratio is calculated by the following formulas :

OR
(iii) The number of females per thousand males

Question 4.
Which State of India has the lowest female literacy rate ? [1]
Answer:
Bihar.

Question 5.
Mention any two causes of the negative growth rate of population in India during 1911-1921. [1]
Answer:

Question 6.
Give any two examples of mining towns in India. [1]
Answer:

Question 7.
What is ‘sectoral planning’ ? [1]
Answer:
The Sector Plan provides general guidelines directed towards ensuring the orderly and efficient development of a plan area. The sector plan addresses essential services and facilitates, land uses, transportation systems, population density and sequencing of development. Full consideration must be given to the costs and benefits of various actions upon the present and future social, economic and environmental fabric of the area.

Question 8.
Why is the density of rural roads very low in the hilly areas of India ? Give one reason. [1]
Answer:

Question 9.
Give the meaning of the term ‘Hinterland’. [1]
Answer:
The hinterland is the land or district behind a coast or the shoreline of a river. It is the rural outlying region that supports a town or city with agricultural products and raw materials. The hinterland ships fresh fruits, vegetables, and milk into the city to provide the village with the finest fresh products.

Question 11.
Explain the concept of ‘Possibilism’, with three, suitable examples. [3]
Answer:
Possiblism is a view of the environment as a range of opportunities from which the individual may choose. This choice is based on the individual’s needs and norms. It grants that the range of choices may be limited by the environment, but allows choices to be made, rather than thinking on deterministic lines.

Question 14.
What is cyber space ? Describe any two advantages of internet. [3]
Answer:
The word “cyberspace” is credited to William Gibson, who used it in his book, Neuromancer, written in 1984. Cyberspace is the notional environment in which communication over computer networks occurs. As a social experience, individuals can interact, exchange ideas, share information, provide social support, conduct business, direct actions, create artistic media, play games, engage in political discussion, and so on, using this global network.
Few advantages are :

Question 15.
Explain with example, how ‘stage of economic development’ and ‘foreign investment’ become the basis of international trade. [3]
Answer:
Stage of Economic Development :
The nature of items traded undergoes changes as the different stages of economic development of countries passes. In agro-based countries, agro products are exchanged for manufactured goods where as industrialized nations export machinery and finished products and import food grains and other raw materials. The study of economic development mainly focused entirely on national product, or the aggregate output of goods and services.

Foreign Investment : Foreign direct investment (FDI) has proved to be resilient during financial crisis. It boosts up the trade where the capital is limited. By developing such capital-intensive industries, the industrial nations ensure import of food stuffs, minerals and create markets for their finished products.

Question 16.
Explain any three push factors that have caused rural to urban migration in India. [3]
Answer:

Question 17.
What are hamleted settlements ? Mention any two areas of India where such settlements are found. [3]
Answer:
A hamlet is a settlement, which is too small to be considered a town or village. As a general rule, hamlets are rural, and many of them arise around a specific site such as a mill or a large farm. In some countries, hamlets are legally defined, while in others; the world is simply a term to describe a small settlement, with no firm definition attached.

A typical hamlet consists of only a few houses, often clustered together close to the road. Many hamlets lack stores and services, forcing their dwellers to travel to the nearest town to meet their needs. Two areas in India are :

Copper mining areas in India are :

Question 19.
Explain the role of ‘power’ and ‘raw-material’ in the location of heavy industries in India. [3]
Answer:
Energy crisis has a great bearing on the industrial development and production. Although the installed capacity of electricity increased from 66.08 million km in 1990-91 to 85.79 million km in 1996-97 but it is much short of the actual demand. It leads to power cut and rostering, which hampers the industrial production. Most of the state electricity boards are running in loss and are in deplorable condition. Rail transport is overburdened while road transport is plagued with many problems. Even national highways in many places are in bad shape.

Question 20.
Explain any three human values which are required to empower socially and economically disadvantaged people. *[3]

Question 21.
Study the given map, showing areas of subsistence gathering carefully and answer the following questions: [5]
(i) Identify and name the areas marked A, B, C and D in your answer-book.
(ii) Explain any four characteristics of gathering.
(iii) Why can’t gathering become important at the global level ? Give two reasons. Question 22.
Define ‘manufacturing’. Classify manufacturing industries on the basis of size into three categories. Explain an important characteristic of each category. [5]
Answer:
Manufacturing is the production of merchandise for use or sale using labour and machines, tools, chemical and biological processing, or formulation. The term may refer to a range of human activities, from handicraft to high tech, but is most commonly applied to industrial production, in which raw materials are transformed into finished goods on a large scale. Such finished goods may be used for manufacturing other more complex products, such as aircraft, household appliances or automobiles.

Size of industry refers to the amount of capital invested, number of people employed and the volume of production. Based on size, industries can be classified into three types :

Question 24.
Explain any three factors responsible for the depletion of water resources. Examine any two legislative measures for controlling water pollution in India. [5]
Answer:
(i) Increased use of irrigation : The impact of increased use of water for irrigation is a decrease in the quality and quantity of downstream water, with, implications on both ecosystem functioning and on downstream use for agriculture, industry and municipal supplies. However, as the demand area, the farmland, is often distant from the critical urban/industrial demand areas, these linkages are often overlooked.

(ii) Use of freshwater in industrial animal production and processing systems : The demand on fresh water has a direct impact, a reduction in the overall availability of fresh water among competing users. It also has an indirect impact through decreasing the water available for diluting effluents, and hence increasing the levels of pollution in downstream systems. Discharged wastewater is generally loaded with nutrients (N and P) and organic compounds. When discharged directly onto surface water, the large quantities of wastewater easily exceed the natural cleaning capacity of the system, causing pollution and increasing biological oxygen demand.

Question 25.
Explain with five suitable examples, how the ‘level of economic development and ‘nature of terrain’ affect the density of roads in India. [5]
Answer:

Question 26.1.
In the given political outline Map of the World, four features have been marked as A, B, C and D. Identify these features with the help of information given below and write their correct names on the lines drawn near them. [5]
(A) : A major sea port.
(B) : A major air port.
(C) : The country having the highest density of population in Asia.
(D) : An area of extensive commercial grain farming. 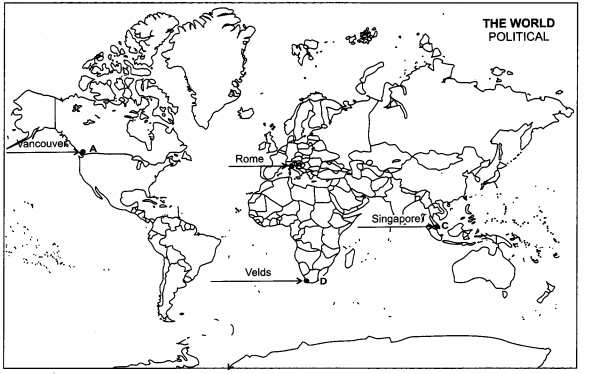 Question 26.2.
Locate and label the following on the given political outline Map of India with appropriate symbols:
(i) Mayurbhanj – iron ore mining area
(ii)A major seaport which has been developed after independence to cater the needs of Western and North-western parts ef the country.
(iii) A state having highest female literacy rate.
Answer:
26.2. 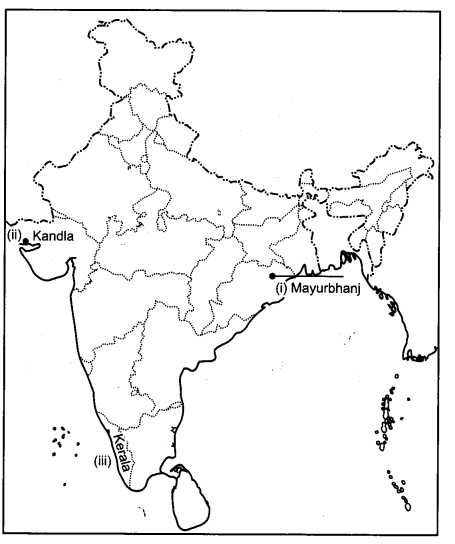 Question 4.
Define the term poverty. [1]
Answer:
A state or condition in which a person or community lacks the financial resources and essentials to enjoy a minimum standard of life and well being that’s considered acceptable in society. Poverty status in the United States is assigned to people that do not meet a certain threshold level set by the Department of Health and Human Services.

Question 14.
Why is river Rhine the world’s most heavily used waterway ? Explain any three reasons. [3]
Answer:
The Rhine is an important waterway. Many goods are transported over the Rhine, and the Rhine valley is also an important wine producing region. The river Rhine begins at Tomasee, a lake in the canton of Graubunden in Switzerland and runs through Switzerland, Germany and the Netherlands. It is also the border between Switzerland and Liechtenstein and also the border between Germany and France. It runs through Basel, Bonn, Cologne and Duisburg. It also separates the cities of Mainz and Wiesbaden.

It works as a main route of transportation of goods F among these countries.

Question 19.
Explain the role of ‘Market and ‘Transport’ in the location of industries in India. [3]
Answer:
The demand for market comes mostly from agriculture, industry and trade. The predominant form of industrial organization developed Market becomes K a necessary infrastructure for fast industrialization and hence it’s important for the economy because India is a land if agriculture where more than 7o % of population depends upon agriculture and as India is also an developing nation so, industrialization is most necessary.

Question 22.
Define the term ‘Tourism’. Explain any four factors that attract tourists in the world. [5]
Answer:
Tourism is the travel for recreational, leisure, family or business purposes, usually of a limited duration. Tourism is commonly associated with transnational travel, but may also refer to travel to another location within the same country. The World Tourism Organization defines tourists as people “travelling to and staying in places outside their usual environment for not more than one consecutive year for leisure, business and other purposes.”
Factors that attracts tourists are as follow :