Question 2.
When the Average Product (AP) is maximum, the Marginal Product (MP) is : (Choose the correct alternative) [1]
(a) Equal to AP
(b) Less than AP
(c) More than AP
(d) Can be any one of the above
Answer:
(a) Equal to AP

Question 4.
Define fixed cost. [1]
Answer:
Fixed costs are those costs which do not vary with the level of output. For e.g. Rent of factory.

OR
An economy faces a major central problem
i. e., for whom the production is to be done? Production/Income is distributed either on the basis of the purchasing powers of the consumers or on the basis of requirements of the individuals.
Two types of distribution are:

Question 7.
When the price of a commodity changes from ? 4 per unit to ? 5 per unit, its market supply rises from 100 units to 120 units. Calculate the price elasticity of supply. Give reason. [4]
Answer:

It is inelastic, as elasticity is less than one.

Question 8.
What is meant by price ceiling? Explain its implications. [4]
Answer:
Price ceiling is a situation when the price charged is more than or less than the equilibrium price determined by market forces of demand and supply. It has been found that higher price ceilings are ineffective. Price ceiling has been found to be of great importance in the house rent market. Question 9.
Given the price of a good, how will a consumer decide as to how much quantity to buy of that good ? Explain.
OR
What is Indifference Curve? State three properties of indifference curves. [4]
Answer:
Consumer equilibrium refers to the situation when consumer gets maximum satisfaction/utility from the goods it consumes. It is the situation through which a consumer decides how many units of the goods to consume. 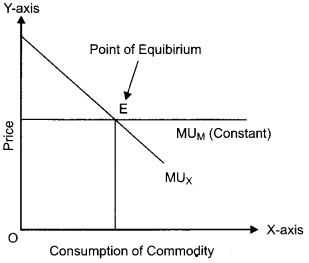 Price remains constant when MU of goods is more than its price, and it that case, consumer will decide not to purchase that good.
Also, when MU is less than its price, then also consumer will give up its consumptions. As a consumer will consume only when, MU is equal to price.
MUx = Px
In the figure,
X-axis = Consumption
Y-axis = Price
E = Consumer Equilibrium
OR
A curve on a graph (the axis of which represent quantities of two commodities) linking those combinations of quantities which the consumer regards as of equal value. Question 10.
State three characteristics of monopolistic competition. Which of the characteristics separates it from perfect competition and why ?
OR
Explain the implications of the following :
(a) Freedom of entry and exit of firms under perfect competition.
(b) Non-price competition under oligopoly. [6]
Answer:
The main features of monopolistic competition are as under:
(1) Large Number of Buyers and Sellers : There are large numbers of firms but not as large as under perfect competition. That means each firm can control its price- output policy to some extent. It is assumed that any price-output policy of a firm will not get reaction from other firms so each firm follows the independent price policy.

(2) Less Mobility : Under monopolistic competition, both the factors of production as well as goods and services are not perfectly mobile.

(b) Non-price competition under oligopoly: In an oligopoly market, firms do not compete with each other for changes in the price. If the firm increases the price, rival firms may not increase it, so it will lead to a loss of the market. Consumers will shift to rival firms. On the other hand, if the firm decreases the price, the rival firms may decrease it, so it will lead to a loss of total revenue. There will not be an increase in the demand for the product. They take into consideration the decisions of rival firms, and hence, the price does not move freely and it leads to non-price competition. High selling cost prevails in the market, resources are not fully used and welfare is not maximised. Question 12.
Explain the conditions of producer’s equilibrium in terms of marginal revenue and marginal cost. [6]
Answer:
Producer’s equilibrium refers to the state in which a producer earns his maximum profit or minimise its losses. According to MR- MC approach, the producer is at equilibrium, when the Marginal Revenue (MR) is equal to the Marginal Cost (MC) and Marginal Cost curve cuts the Marginal Revenve curve from below.
Two conditions under this approach are :
(i) MR = MC
(ii) MC curve should cut the MR curve from below, or MC should be rising.
MR is the addition to TR from the sale of one more unit of output and MC is the addition to TC for increasing the production by one unit. In order to maximise profits, firms compare its MR with its MC.
As long as the addition to revenue is greater than the addition to cost, it is profitable for a firm to continue producing more units of output. In the diagram, output is shown on the X-axis, revenue and cost on the Y-axis. The Marginal Cost (MC) curve is U-shaped and P = MR = AR, is a horizontal line parallel to X-axis. MC = MR at two points R and K in the diagram, but profits are maximised at point K, corresponding to OQ level of output. Between OQ and Q1 levels of output, MR exceeds MC. Therefore, firm will not stop at point R but will continue to produce to take advantage of additional profit. Thus, equilibrium will be at point K, where both the conditions are satisfied.
Situation beyond OQ1 level:
MR < MC when output level is more than OQ1 MR < MC, which implies that firm is making a loss on its last unit of output. Hence, in order to maximise profit a rational producer decreases output as long as MC > MR. Thus, the firm moves towards producing OQ units of output.

Question 13.
Define money supply. [1]
Answer:
Money supply is the total amont of money in circulation or in existence in a country at a specific time.

Question 14.
Which of the following affects national income? (Choose the correct alternative) [1]
(a) Goods and Services tax
(b) Corporation tax
(c) Subsidies
(d) None of the above
Answer:
(c) Subsides 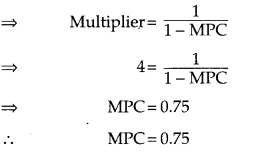 Question 19.
What is meant by inflationary gap? State three measures to reduce this gap.
OR
What is meant by aggregate demand ? State its components. [4]
Answer:
An inflationary gap, is the amount by which the actual gross domestic product exceeds the potential full-employment GDP. Three measures to reduce this gap are:
1. Fiscal Policy: Fiscal policy is the expenditure and revenue (taxation) policy of the government to accomplish the desired objectives.
In case of excess demand (when current demand is more than aggregate supply at full employment), the objective of fiscal policy is to reduce aggregate demand.

2. Monetary Policy: Monetary policy of the central bank of a country is to control the money supply and credit in the economy. Therefore, it is also called Central Bank’s Credit Control Policy. Money broadly refers to currency notes and coins whereas credit generally means loans, i.e., finance provided to others at a certain rate of interest. Monetary measures (instruments) affect the cost of credit (i.e., rate of interest) and availability of credit. Thus, it helps in checking excess demand when credit availability is restricted and credit is made costlier.

3. Miscellaneous: Other anti-inflationary measures are import promotion, wage freeze, control and blocking of liquid assets, compulsory savings scheme for households, increase in production by utilising idle capacities, etc.
OR
Aggregate demand (AD) or Domestic Final demand (DFD) is the total demand for final goods and services in an economy at a given time. It specifies the amount of goods and services that will be purchased at all possible price levels.
Components of aggregate demand are:
AD = C + I + G + (x + m)
Where
C = Consumption
I = Investment
G = Government Spending
X – M = Net Exports
1. Consumption: This is made by households, and sometimes consumption accounts for the larger portion of aggregate demand. An increase in consumption shifts the AD curve to the right.

2. Investment: Investment, second of the four components of aggregate demand, refers to the spending by firms not households. However, investment is also the most volatile component of AD. An increase in investment shifts AD to the right in the short rim and helps to improve the quality and quantity of factors of production in the long run.

4. Net Exports: Imports are foreign goods bought by consumers domestically, and exports are domestic goods bought abroad. Net exports is the difference between exports and imports, and this component can be net imports too if imports are greater than exports. An increase in net exports shifts aggregates demand to the right. The exchange rate and trade policy affects net exports.

It preserves the stability of the banking and financial system by protecting individual’s depsoited funds and preventing panic-ridden withdrawals from banks with temporary limited liquidity. For more than century and a half, central banks have been trying to avoid great depressions by acting a lenders of last resort in times of financial crisis. Question 24.
Explain the meaning of the following : [6]
(a) Revenue deficit
(b) Fiscal deficit
(c) Primary deficit
OR
Explain the following objectives of government budget:
(a) Allocation of resources
(b) Reducing income inequalities.
Answer:
(a) Revenue Deficit: A revenue deficit occurs when the net income generated (revenues less expenditures), falls short of the projected net income. This happens when the actual amount of revenue received and/ or the actual amount of expenditures do not correspond with budgeted revenue and expenditure figure.

(b) Fiscal Deficit: A fiscal deficit occurs when a government’s total expenditures exceed the revenue that it generates, excluding money from borrowings. Deficit differs from debt, which is an accumulation of yearly deficits.

(c) Primary Deficit: The deficit can be measured with or without including the interest paid on the debt as expenditures. The primary deficit is defined as the difference between current government’s spending on goods and services and total current revenue from all types of taxes.
OR
(a) Allocation of Resources: It is one of the important objectives of government budget. In a mixed economy, the private producers aim towards profit maximisation, while, the government aims towards welfare maximisation. The private sector always tend to divert resources towards areas of high profit, while ignoring areas of social welfare. In such a situation, the government through the budgetary policy aims to reallocate resources in accordance with the economic and social priorities of the country.