Question 4.
‘Homogenous products’ is a characteristic of : (choose the correct alternative) [1]
(a) Perfect competition only
(b) Perfect oligopoly only
(c) Both (a) and (b)
(d) None of the above
Answer:
(c) (a) and (b) 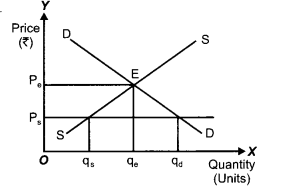 In the above fig, it is assumed that the market price ps is below the equilibrium price pe. According to demand curve, quantity demanded. qd, quantity supplied qs, there emerges the situation of excess demand (qd – qs).
The excess demand pushes the price up from the OPs price level. With rise in price, the quantity demanded contracts and quantity supplied expands. This process continues till the equilibrium gets established at point E at OPe price level and OQe quantity.

Question 9.
Explain in effect of change in prices of the related goods on demand for the given good. [4]
Answer:
Goods are said to be related when price of one good (say ‘X’) causes change in demand for other good (say ‘Y’). Related goods are of two types:
(a) Substitute goods (direct relationship) : Substitute goods are a pair of goods which can be used (substituted) in place of each other. They are competitive good. Like pepsi and coca-cola or tea and coffee. Demand for a given commodity is affected if the price of its substitute rises or falls. For the case of tea and coffee-the, demand for tea will fall when the price of its substitute-coffee falls. A fall in the price of substitute good (tea) reduces the consumers demand for given good (coffee).

If related good is a substitute of a given good, then a rise in price of substitute good will lead to rise in demand for given good because it becomes relatively cheaper. 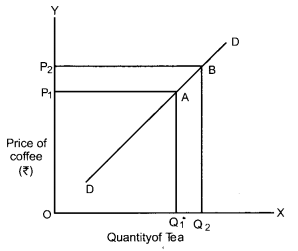 OR
Cost: The sum of explicit cost (cash payments made by firms to outsiders for hiring factor services and buying raw materials) and implicit costs (cost of self owned and self supplied inputs) constitute total cost of production of a commodity. Question 14.
Explain the distinction between “Change in quantity supplied” and “Change in supply”. Use diagram. [6]
Answer: (b) Freedom of entry and exit to the firms: Implies that there are no obstacles for the firms to move in and out of industry. The implication is that when existing firms are making profits, new firms enters, raise the output of industry, brings down the market price enough for the firm to earn only normal profit in the long run. The opposite happens if the existing firms are facing losses.
OR
Implications of the following in oligopoly market:
(a) Inter-dependence between firms: There are very few large firms in oligopoly market and these firms are mutually dependent on each other and hence influence the market price and output. To fix the price and its output , every firm has to consider the decision of the rival firm also as all the firms are mutually dependent on each other.

Question 16.
Define Stocks. [1]
Answer:
Stock: A stock are the variables whose magnitude is measured at a point of time, e.g. population. OR
Role of taxation to reduce excess demand :
Important part of fiscal policy is revenue policy which is expressed in terms of taxes. During inflation, government should raise rates of all taxes especially on rich people because taxation withdraws purchasing power from the tax payers and to that extent reduces effective demand. The non-discretionary elements refer to in built stabilizers of income which operate automatically in reducing excess demand like progressive income tax, subsidies, old-age pension and others such as transfer payments . 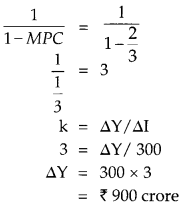 Question 24.
Government incurs expenditure to popularize yoga among the masses. Analyze its impact on gross domestic product and welfare of the people. [4]
Answer:
Impact on GDP: With the help of yoga, people will be in good state of health as well as in a good state of mind and it is rightly said that healthy mind stays in a healthy body. When a person has healthy mind and healthy body, he/ she will work hard towards producing good and increased quantity of goods which will help in increasing the GDP of the economy. People with healthy mind will provide their efficient services to the economy which will have a positive impact on the GDP of the country and will help in increasing the standards of the economy.

Through budgetary policy, government aims to allocate resources in accordance with economic (profit maximisation) and social (public welfare) priorities of the country.
To encourage investments, government can give tax concessions, subsidies, etc. to the producers. For example : government discourages the production of harmful consumption goods like liquor or cigarettes, etc. through levying heavy taxes and encourages the use and production of “khaadi” products by providing subsidies. Government budget can be used to bring price stability or economic stability in the economy : (b) Foreign investment in India will increase the supply of foreign currency in our country. This increase in supply is reflected as shift in the supply curve. With the shift, new equilibrium point is established, where exchange rate falls and thus the demand and supply of foreign currency rises and exchange rate falls. This will continue till the equilibrium is reached. Question 4.
When does ‘increase” in supply take place ? [1]
Answer:
When supply of a commodity rises due to change in factors other than the price, it is called increase in supply. Increase in supply is the rightward shift of the supply curve.

Question 7.
A consumer consumes only two goods X and Y. If marginal utilities of X and Y are 4 and 5 respectively, and if price of X is ₹ 5 per unit and that of Y is ₹ 4 per unit, is the consumer in equilibrium? What will be further reaction of the consumer? Explain. [3]
Answer:
Marginal utility of X = 4
Price of X = ₹ 5
Marginal utility of Y = 5
Price of Y = ₹ 4
MUx ÷ Px = 4 ÷ 5 = 0.8
MUy ÷ Py = 5 ÷ 4 = 1.25
The ratio of MUy to the price of Y is greater than the ratio of MUx to the price of X, so the consumer is not at equilibrium and to reach equilibrium level, consumer should increase the consumption of good Y and decrease the consumption of good X.

Question 3.
What is the relation between Marginal Cost and Average Cost when average cost is rising? [1]
Answer:
When AC is rising, MC rises at a faster rate and MC remains above AC curve.

Question 5.
When does ‘Decrease’ in supply take place?           [1]
Answer:
Decrease in supply refers to the fall in the supply due to unfavourable changes in the determinants other than price of a good. Graphically, decrease in supply is indicated by a leftward upward shift of the supply curve.

Question 8.
A consumer consumes only two goods X and Y. Marginal utility of each is 2. The price per unit of X and Y is ₹ 1 and ₹ 2 respectively. Is the consumer in equilibrium? What will be the further reaction of the consumer? Explain. [1]
Answer:
According to the utility approach, a consumer reaches equilibrium where the following equality is met.
\(\frac{\mathrm{MUx}}{\mathrm{P}_{\mathrm{x}}}=\frac{\mathrm{MU} \mathrm{y}}{\mathrm{P}_{\mathrm{y}}}\)
According to the given question :

Thus, a consumer is not in equilibrium. In order to reach the equilibrium, a rational consumer would increase the consumption of good X and decrease that of good Y. Question 25.
Explain how ‘margin requirements’ are helpful in controlling credit creation? [4]
Answer:
The Commercial Banks function to grant loan depends upon the value of security being mortgaged by the borrower so banks keep a margin, which is the difference between the market value of security and loan value. Raising the marginal requirement reduces the maximum amount a borrower can borrow from the Commercial Banks. In this way margin requirements helps in controlling credit creation.