Question 2.
Define marginal cost. [1]
Answer:
Marginal cost may be defined as the change in total cost that takes place by producing an additional unit.

Question 4.
Give the meaning of market demand. [1]
Answer:
Market demand is the sum total demand of all the buyers of a good at a point of time at a given price.

Question 6.
Explain the difference between an inferior good and a normal good. [3]
Answer:
Normal Good
1. A normal good is one whose demand increases with an increase in the money income of the consumer.
2. Normal goods have positive income effect, e.g. if a consumer buys more of milk for his family as his income rises, then milk will be called a normal good as shown in Diagram 1. 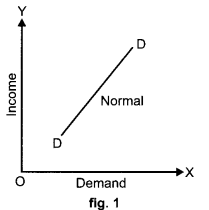 Inferior Good
1. An inferior good is one whose demand falls with a rise in income of the consumer because he can now afford to buy a normal (superior) good.
2. Inferior goods have negative income effect; e.g. if a consumer reduces the consumption of toned milk when his income rises, then toned milk is an inferior good for that consumer, as shown in figure. 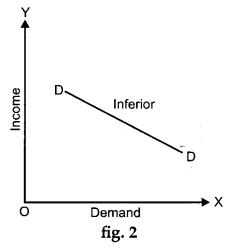 Question 7.
Explain the law of diminishing marginal utility with the help of a total utility schedule. [3]
OR
Explain the condition of consumer’s equilibrium with the help of utility analysis. [3]
Answer:
Law of Diminishing Marginal Utility states that as a consumer consumes more and more units of a commodity at succession, then the Marginal Utility derived from the consumption of each additional unit of the commodity falls. Buyers like firms have to accept the price which is fixed by the supply and demand of the whole industry. Buyers can buy any quantity of product at this price. Similarly sellers are also very large in number having very small share in the market. Sellers cannot influrence the market price and can sell any quantity on the prevailing price. That is why firms are called price-takers in perfectly competitive industry. 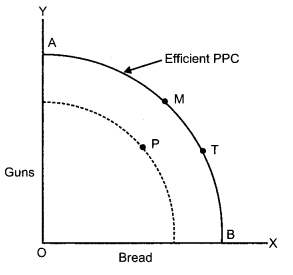 In the Table, the difference between TR and TC is maximum at 3 units as well as at 4 units but the point of equilibrium is 4 units because at this point MC = MR. & MC must rise.
These two conditions can be explained with the help of a table given below :
Equilibrium of a Producer Question 13.
The price elasticity of demand for a good is -0.4. If its price increase by 5 percent, by what percentage will its demand fall? Calculate. [4]
Answer:

Question 14.
Giving reasons, state whether the following statements are true or false : [6]
(i) A monopolist can sell any quantity he likes at a price.
(ii) When equilibrium price of a good is less than its market price, there will be competition among the sellers.
Answer:
(i) The statement is false. The price is fixed at a point where marginal cost is equal to marginal revenue. If a monopolist fixes a price less or more than the price fixed at equilibrium point, the quantity will be more or less than the equilibrium quantity but not the quantity that a monopolist would like to sell.

(ii) The statement is true. In this situation, market price is higher than the equilibrium price. As a result of which supply will be more than demand. As such there will be competition among the sellers. In other words, sellers would like to sell their entire quantity to meet the demand which (supply) is much more than the demand.

Question 15.
Explain the Law of Variable Proportions with the help of total product and marginal product curves. [6]
Answer:
The law of variable proportions explains the relationship between inputs and outputs in the short run. In the short run, some factors of production (inputs) are fixed and other factors input are variables. The quantity of output can be increased by increasing the use of variable input.

As more and more units of variable input are employed, the proportion between the fixed and variable factors keeps on changing. The output passes through three phases.
These three phases are identified with respect to the marginal product. Question 16.
Explain consumer’s equilibrium with the help of Indifference Curve Analysis. [6]
OR
Explain the relationship between
(i) Prices of other goods and demand for the given good.
(ii) Income of the buyers and demand for a good.
Answer:
Consumer’s equilibrium refers to the optimum combination of the two goods which a consumer can afford (given his income and price of two commodities) and this combination gives him maximum satisfaction that he possibly can get. Question 18.
What are demand deposits? [1]
Answer:
Demand deposits are those deposits which a depositor can withdraw at any given time by writing a cheque.

Question 21.
What is a Government Budget? [1]
Answer:
Budget is prepared during the period of financial year. It is a statement which is made by government for showing the estimated receipts and expenditure.

Question 23.
Explain any one objective of Government Budget. [3]
Answer:
To maintain economic stability is an important objective of government budget. Some economic fluctuations like boom and depression affects the economy of a country. Because of these changes country faces some benefits and harms. In this situation, appropriate policy measures will be required by the government to affect the levels of aggregate demand. These measures are called stabilization measures. These are for avoiding unemployment and inflation.

Question 27.
Giving reasons categorise the following into stock and flow: [4]
(i) Capital
(ii) Saving
(iii) Gross domestic product
(iv) Wealth
OR
Explain the circular flow of income.
Answer:
(i) Capital is a stock. This is so because capital is measured at a point of time.
(ii) Saving is a flow. This is so because it relates to a period of time.
(iii) Gross domestic product is a flow because it relates to a time period which is generally one fiscal year.
(iv) Wealth is a stock because it is measured at a point time.
OR
The flow of production, income generation and expenditure involving different sectors of the economy in the form of wages, rent and dividends, is known as circular flow of income (see diagram). Production gives rise to income (factor incomes), which in turn gives rise to demand for good and services. This demand leads to expenditure by households on goods and services produced. In this way income generated by production units reaches back to production units and makes the circular flow complete. OR
Calculate net national disposable income from the following data :

Note : Except for the following questions, all the remaining questions have been asked in previous sets. Hence, elasticity of supply is zero. (ii) There is only one single seller: Since, a monopolist firm is the single firm in the market, therefore, it enjoys full control over the price and output decisions. The monopolist has the total freedom to fix the price level, which maximizes his profit. Therefore, it can be said that a monopoly firm is a price-maker. (ii) Nature of the good: The price elasticity of demand depends on the nature of a good. The goods and services can be broadly divided into three categories – Necessities, Luxuries, Jointly- demanded goods. The three types of goods have different values of elasticity as discussed below.

(b) Luxury goods: Luxuries are the good which are not essential, rather, are consumed for leisure or comfort purposes. For example, air conditioner, branded garments, etc. The demand for such goods is highly responsive to changes in their prices. A rise in the price, reduces the demand for them and vice-versa. Thus, such goods have high price elasticity.

The process of money creation can be explained by taking an example of a bank XYZ. A depositor deposit ₹ 10,000 in his savings account, which will become the demand deposit of the bank. Based on the assumption that not all customers will turn up at the same day to withdraw their deposits, banks maintains a minimum cash reserve of 10% of the demand deposits, i.e., ₹ 1000. It lends the remaining amount of ₹ 9000 in the form of credit to other customers. This further creates deposits for the bank XYZ. With the cash reserve of ₹ 1000, the credit creation is worth ₹ 10,000. So, the credit multiplier is given by:
Credit multiplier = 1/CRR = 1/10% = 10
The money supply in the economy will increase by the amount (times) of credit multiplier. Note: Except for the following questions, all the remaining questions have been asked in previous sets.

Percentage Change in Quantity Supplied is 40%. Question 10.
Explain “freedom of entry and exit to firms in industry” features of monopolistic competition. [3]
Answer:
Freedom of entry and exit to firms in a monopolistic industry implies that there exists no restriction for the new entrants and existing firms to quit the industry. The new firms are attracted into the industry whenever price exceeds the minimum of short run average cost (SAC) in short run and whenever price exceeds the minimum of long run average cost (LAC) in the long run. Due to the free entry of the new firms in the industry, the quantity produced increases, which results in the rise of the supply of the output and finally, this pushes the equilibrium price down. Thus, the equilibrium price continues to fall, until it become equals to the minimum of average cost curve, where, all the firms earns normal profit.

At this point, no new firm has any incentive to enter the industry. Similarly, on the other hand, the existing firms leave the industry whenever the price falls short of the minimum of short run average cost curve (SAC) in the short run or whenever price falls short of the minimum of long run average cost (LAC) in the long run. This is because under such circumstances, the existing firms each losses and consequently wishes to quit. Now, as there are no restrictions imposed on the exit of the firms, so firm quits the industry. This leads to the fall in the supply of the commodity. Hence, the price start rising and reaches the point at LAC where a firm earns only normal profit.

Thus, it is due to freedom of the entry and exit to firms that price remains equal to the minimum of average cost implying the normal profit only.

Question 12.
Give the meaning of producer’s equilibrium. A produces that quantity of his product at which marginal cost and marginal revenue are equal. Is he earning maximum profits? Give reasons for your answer. [4]
Answer:
At a point where, MC = MR, the producer’s equilibrium is established. Yes, the producer earns maximum profit on this point. Because any deviation from this position will either reduce the profit of a firm or increase the losses.

When marginal cost is less than MR available from the sale of a product, the firm will go on increasing its output. When MC and MR are equal, the firm reaches on its equilibrium. After that point if a firm increases its output, MC will be greater than MR resulting in decline in profit. This diagram is related to the perfect competition, where the equilibrium output is OQ, where MR = MC.