Question 1.
Gauri sees the following scene as he looks out of his bedroom window. He is alarmed at the way his city has changed in the past five years. He writes an article for his city newspaper expressing his alarm and painting the present position cautioning people against environmental pollution. Write that article considering yourself to be Gauri. Pollution
or
The Traffic on the Road

Our cities are changing very fast. My father tells me there were no traffic jams in our city ten years before. Then nobody found it difficult to cross the road. Today, the roads are better and wider but crossing them is always dangerous. The traffic jams have become common. There are few trees and in the evening the smoke envelops the city. It is not easy to breathe in the polluted air. It is all due to the vehicles on the road. There are more cars than the city roads can accommodate. As a result breathing diseases such as asthma have become very common. Something must be done to lessen the number of vehicles on the road.

Question 2.
Elections are very common in our country. Think of an election booth of your village/town/city. Write a paragraph as it appeared on the election day. 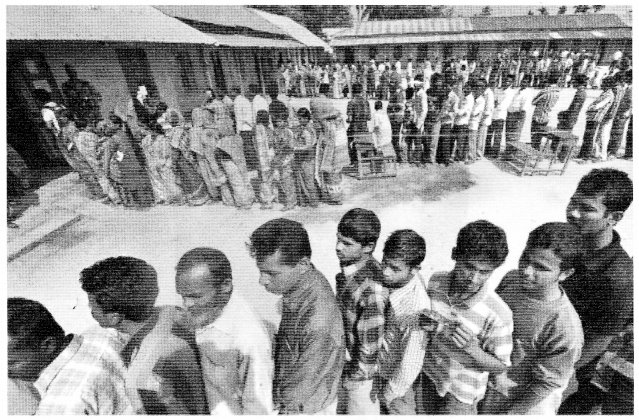 The Scene at a Polling Booth

Elections occupy an important place in a democracy. In our country, elections are held after every five years. Sometimes there are by-elections and election to the local bodies like Municipality etc. In the recent Parliamentary elections, our school was a polling station. There was lot of excitement in the city before the election. However, the election day was quiet. On the day of the election, party workers were busy bringing the voters in vehicles. There were long queues at the polling booth. I also went to cast my vote. Outside the booth, a party worker gave me a slip. My voter identification number was written on it. Inside the polling booth, an officer checked my name and identity. The other gave me the ballot paper and the third put a mark on my finger. Then I went behind a curtain and cast my vote. The excitement of the polling came to an end at 5 p.m. The polling was largely peaceful.