Question 1A:
Who remarked, ‘When France Sneezes, the rest of Europe catches cold’?
Answer:
Mettemich remarked.

Question 2A:
Name the allegory of the French nation in the 19th century.
Answer:
Marianne, a popular Christian name which underlined the idea of a people’s nation.

Question 2B:
Who was Paul Bernard?
Answer:
Paul Bernard was an influential writer and policy maker who believed that economy of the colonies needed to be developed.

Question 3:
Minerals are deposited and accumulated in strata of which rocks?
Answer:
Sedimentary rocks.

Question 6:
Which language is spoken by the majority of Belgians?
Answer:
Dutch language.

Question 7:
What are non-renewable resources?
Answer:
Resource which are not replenished by nature and get exhausted. For example, minerals.

Question 8B:
Write three main characteristics of Trieu Au, the rebel woman of Vietnam.
Answer:
Trieu Au was one of the most venerated rebel women of Vietnam during the third century CE. She was an orphan and lived with her brother. She resisted Chinese occupation until her death. When she grew up she left home, went into the jungle and organised a large army. At last when her army was crushed she drowned herself instead of surrendering. After her death, she was worshipped as a martyr with a sacred image. Reason behind her worship was her dedication to and sacrifice for her nation.

Question 10:
Why are petroleum refineries termed as ‘nodal industries’?
Answer:
Petroleum refineries act as a ‘nodal industry’ for synthetic textile, fertiliser and numerous chemical industries. During fractional distillation of mineral oil, apart from petrol, diesel and kerosene which act as fuel, a number of byproducts like naptha, phyneyl, paraffin wax, asphalt or tar and a number of petrochemicals are obtained. Chemicai fertilisers, insecticides and chemicais, artificiai fibres and artificial rubber are products of petrochemicals. Thus, petrochemicals, provide raw materials for fertilisers, numerous chemicals, synthetic textiles, synthetic rubber and plastic industries.

Question 11:
Why are metalled roads better than unmetalled roads? What is the role of border roads and national highways in transportation?
Answer:
Metalled roads are made of either cement, concrete or even bitumen of coal are therefore more durable than unmetalled road. Unmetalled roads go out of use in rainy season.
Border roads play an important role in connecting strategically important difficult areas and helps in the economic development of the area. National Highways are the primary road system which links extreme parts of the country.

Question 12:
Why is there a tendency for the sugar mills to shift to and concentrate in the southern and western states in India? Give any three reasons.
Answer:
Three main reasons are as follows :

(i) The cane produced has a higher sucrose content.
(ii) The cooler climate ensures a longer crushing season.
(iii) The cooperatives are more successful in these states.

Question 13:
What are the forms of challenges faced by different countries in respect to democracy?
Answer:

Question 15:
What are the conditions under which democracies accommodate social diversities?
Answer:
(i) The majority always needs to work with the minority so that governments function to represent the general views.
(ii) It is necessary that rule by majority does not become rule by majority community in terms of religion, race, linguistic group, etc. Different persons or groups should be allowed to form a government as a result of an election conducted.

(i) People form their personal groups for the purpose of savings and also lend money among themselves.
(ii) Rate of interest is lower than informal service providers.
(iii) They can also avail loans from banks if their savings are regular.

Question 19B:
Outline the changes in technology and society which led to an increase in readership of the novel in the 18th century in Europe.
Answer:
Technological improvement and development in printing led to more and more books being printed. More books led to larger sales. In fact, the novels were mass produced and sold rapidly. More books brought the prices down and even the poor could afford them. In the beginning novels were not cheap. One volume of ’Tom Jones ’ written by Henry Fielding cost three shillings and there were six volumes of the book. The price was more than a labourer could earn in a week. Novels were lent out by circulating libraries and publishers made profit.

Question 20A:
Discuss why the Europeans were motivated to establish colonies.
Answer:
Europe became the centre of world trade by the nineteenth century, mainly sustained by colonies.
Colonisation of Americas was motivated more by the greed of wealth and search for a better life. On the other hand, colonisation of Asian and African countries was also motivated by conditions in Europe, caused by the Industrial Revolution and greed for economic and political dominance of the world.
Many factors motivated the Europeans to establish colonies :

Question 22:
What makes India a federation?
Answer:
The Constitution declared India as a Union of states. The following points clearly show that the Indian Union is based on the principles of federalism –

Question 24:
The table below shows the estimated number of workers in India in the organized and unorganized sectors. Read the table carefully and answer the questions that follow : 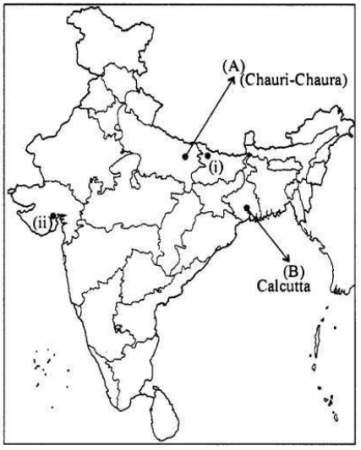 Question 28:
Three features A, B and C are marked in the given outline political map of India. Identify these features with the help of the following information and write their correct names on the lines marked in the map. [3]
(A) Terminal station of the East West Corridor.
(B) Oil Field
(C) Thermal Power Plant