Topics and Sub Topics in Class 6 Science Chapter 7 Getting to Know Plants:

3. Can you find a plant in your house or in your neighbourhood which has a long but a weak stem? Write its name. In which category would you classify it?
Ans: Yes, we find a money plant in our house. It is a climber.

4. What is the function of a stem in a plant?
Ans: A stem performs following functions:
(i) The stem and its branches hold leaves to get maximum sunlight.
(ii) It transports water from roots to different parts of the plant.
(iii) It transports food from leaves to different parts of the plant.
(iv) It bears leaves, flowers and fruits.

6. If a plant has fibrous root, what type of venation are its leaves likely to have?
Ans: Parallel venation.

7. If a plant has leaves with reticulate venation, what kind of roots will it have?
Ans:Tap root.

10. Which of the following plants have you seen? Of those that you have seen, which one have flowers?
Grass, maize, wheat, chilli, tomato, tulsi, pipal, shisham, banyan, mango, jamun, guava, pomegranate, papaya, banana, lemon, sugarcane, potato, groundnut
Ans: 11. Name the part of the plant which produces its food. Name this process.
Ans: Leaves produce food for the plant. This process is called photosynthesis.

12. In which part of a flower you are likely to find the ovary?
Ans: We find ovary in pistil. It is the lowermost part of the pistil.

2. Are all the plants same in size?
Ans: No, all plants are of different sizes.

3. What are the major parts of plants?
Ans: Stem, root, leaves and flowers.

8. Define petiole.
Ans: The part (stalk) of a leaf by which it is attached to the stem is called petiole.

9. What is lamina?
Ans:  The broad green flat part of leaf is called lamina.

10. What are veins?
Ans:  The lines on the leaf are called veins.

11. What is midrib?
Ans: A thick vein in the middle of the leaf is called midrib.

13. How many types of leaf venation are there? 14. What is transpiration?
Ans: The process by which water comes out from the leaves in the form of vapour is called transpiration.

15. Name the process by which leaves can prepare their food.
Ans: This process is called photosynthesis.

17. Where does the photosynthesis take place in plants?
Ans: It takes place in the leaves.

18.  Name the part of plant which helps in holding the plant in the soil.
Ans: Roots. 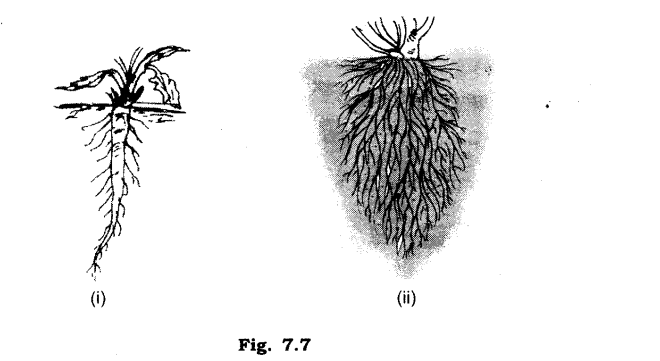 20. What are tap roots?
Ans: The roots in which one root is main root and other lateral roots grow on it are called tap roots.

21. Give names of two plants which have tap root.
Ans: Gram and mustard.

24. What are fibrous roots?
Ans: The roots which do not have any main root but all the roots are similar are called fibrous root.

25. Does the stem prepare food for any plant?
Ans: Yes, there are some plants whose stem prepares food, e.g. cactus.

27. What are sepals? What are their functions?
Ans: The small green coloured leaf-life structures are called sepals. It protects flower when it is in stage of bud.

28. What are petals? Why are they generally coloured?
Ans: The coloured big leaf-life structures present in flower are called petals. Petals are coloured so as to attract insects for pollination.

29. What are stamens?
Ans:When we remove sepals and petals from the flower then we see some filaments in the flower which are called stamens. These, are the male part of the flower. 30. Name various parts of stamen.
Ans: There are two parts of a stamen:
(i) Anther (ii) Filament.
These are the male part of the flowers.

31. What is pistil?
Ans: The innermost part of a flower is called pistil. These are the female part of the flowers. 33. What are ovules?
Ans: These are small bead-like structures inside the ovaiy.

Class 6 Science Chapter 7 SHORT ANSWER TYPE QUESTIONS
1. What are weeds?
Ans: The unwanted plants that grow in the fields with the main crops or in their surroundings are called weeds. Weeds are the plants which are not grown by the farmers. For example, grass.

2. Classify plants and give an example of each.
Ans: On the basis of various characteristics most of the plants can be classified into three categories:
(i) Herbs, e.g. tomato
(ii) Shrubs, e.g. lemon
(iii) Trees, e.g. mango

3. What are herbs? Give two examples.
Ans: The plants with green and tender stems are called herbs. They are usually short and may have no or less branches. For example, tomato, potato.

4. What are shrubs? Give two examples.
Ans: The plants which have a hard but not a very thick stem are called shrubs. Such plants have the stem branching out near the base. For example, lemon, rose plants.

5. What are trees? Give two examples.
Ans: The plants which are very tall and have hard and thick brown stem are called trees. The stems have branches in upper part and much above the ground. For example, mango, neem.

6. What are creepers? Write an example.
Ans. The plants with weak stem that cannot stand upright and spread on the ground are called creepers. Various types of grasses are the examples of creepers.

7. What are climbers?
Ans: The plants that take support of neighbouring structures and climb up are called climbers. They have weak stem. For example, grapes, money plant, beans. 9. Explain the structure of a leaf with the help of a labelled diagram.
Ans: There are two main parts of leaf:
(i) Petiole: The part of the leaf by which it is attached to the stem is called petiole.
(ii) Lamina: The broad, green part of the leaf is called lamina.

The lamina contains following parts:
(i) Veins: There are various types of lines on the leaf. These lines are called veins
(ii) Midrib: There is a thick vein in the middle of the leaf. This vein is called midrib.

10. Explain the main functions of leaf.
Ans: There are following two main functions of leaf:
(i) Transpiration: The extra water comes out of the leaves in the form of vapour. This process is called transpiration.
(ii) Photosynthesis: The process by which leaves prepare their food from water and carbon dioxide, in the presence of sunlight and a green-coloured substance, is called photosynthesis.

11. What are unisexual and bisexual flowers?
Ans: Unisexual flower has either male (stamen) or female (pistil) parts.
Bisexual flowers have both male and female whorl in the flowers, i.e., they have both stamen and pistil.

13. Pitcher plant has green leaves which can prepare food by photosynthesis then why does it eat insects?
Ans: To get nitrogenous compounds which it cannot absorb from the soil.

14. Name a plant that has underground as well as aerial (above the ground) root system.
Ans: Banyan tree.

15. Why do we see dew drops on leaves in the early morning?
Ans: At night the water lost by leaves does not get evaporated and gets collected on the leaves in the form of dew drops.

16. Why are petals colourful?
Ans: The colourful petals attract insects for pollination.

19. Leaves need oxygen and carbon-dioxide (for photosynthesis). How do they get these gases?
Ans: Leaves take in these gases from atmosphere through small pores present on them called stomata.

20. How can one destarch the leaves of potted plant without plucking, them?
Ans: By keeping it in dark for 2-3 days. 2. Explain the structure of a typical flower with the help of a diagram.
Ans: A typical flower contains the following parts:
(i) Stalk: The part by which a flower is attached to the branch is called stalk.
(ii) Sepals: The small green leaf-like structures of the flower are called sepals,
(iii) Petals: The big coloured leaf-like structures are called petals. Different flowers have petals of different colours.
(iv) Stamen: It is the male part of the flower. It has two parts: (a) Filament and (b) Anther.
(v) Pistil: The innermost part of a flower is called pistil. It has three parts: (a) Stigma, (b) Style and (c) Ovary. It is the female part of the flower.

3. Explain an activity to test the presence of starch in a leaf.
Ans: Take a leaf in a test tube and pour spirit till it completely covers the leaf. Now put the test tube in a beaker having water. Heat the beaker till all the green colour from the leaf comes out into the spirit in the test tube. Take out the leaf and wash it with water. Put it on a plate and pour some iodine solution over it. The iodine solution is brown in colour but when it comes in contact with starch it turns blue-black. The iodine solution will turn blue-black when dropped on the leaf, this confirms the presence of starch in the leaf. 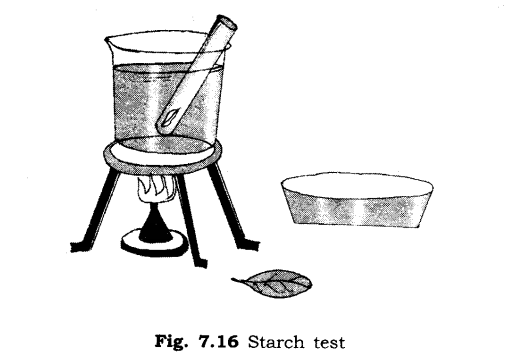 4. Explain that sunlight is essential for photosynthesis.
Ans: Take a potted plant having green leaves. Place it in a dark room for a day or two so that all the starch present in leaves is used by the plant. Now cover a portion of leaf with black paper and keep the plant in the sun for a day. Pluck the leaf, remove the black paper and test it for the starch. We see that only that part of the leaf becomes blue-black which was open to sun. The covered part does not become blue-black. This shows that no starch is formed because it gets no sunlight.

6. Explain various kinds of roots with the help of an example.
Ans: There are following two types of roots:
(i) Tap roots: The roots which have one main root and other smaller lateral roots are called tap roots. For example, mustard plant, gram.
(ii) Fibrous roots: The roots which have no main root but all the roots appear similar are called fibrous roots. For example, maize, wheat.