Question 7.
Name the process of the fusion of gametes ?
Answer:
The process by which male and female gametes fuse to each other is called fertilization.

Question 9.
What is the other name of sex cell ?
Answer:
Sex cells are also known as gametes.

Question 12 A.
What are the female gametes in human called ?
Answer:
The female sex cells (gametes) in humans are called eggs.

Question 17.
Which organ of the human body passes sperms from a man to a woman ?
Answer:
Penis is an organ which passes the sperms from the man’s body into the vagina in the women’s body during mating.

Question 18.
In which female reproductive organ does the embryo get embedded ?
Answer:
The embryo gets embedded in the wall of the uterus for further development.

Question 24.
What term is used for the following ?
The change from tadpole to frog.
Answer:
The transformation of the larva (tadpole) into an adult (frog) through drastic changes is called metamorphosis.

Question 26.
What term is used for ‘bulges’ observed on the sides of the body of Hydra ?
Answer:
These bulges are the developing new individuals and they are called buds.

Question 31.
Name the parent sheep of which Dolly was a clone.
Answer:
Dolly was a healthy clone of the Finn Dorsett sheep. Question 41.
What is meant by an ‘embryo’ ? Can we identify the body features in an embryo ?
Answer:
The zygote divides repeatedly to give rise to a ball of cells. The cells then begin to form groups that develop into different tissues and organs of the body. This developing structure is termed an embryo.
The stage of the embryo in which all the body parts can be identified is called a foetus.

Question 42.
Give two differences between a zygote and a foetus.
Answer: Question 45.
Define foetus. After how many weeks of development, a human embryo is said to become a foetus ?
Answer:
The stage of the embryo in which all the body parts can be identified is called a foetus. A human embryo becomes a foetus after about 8 weeks of pregnancy.

(b) The animals that reproduce by laying eggs are called oviparous animals. In such animals, the baby develops inside eggs that the mother lays.
Examples of Oviparous animals – Frog, sparrow, lizard, hen, fish, butterfly.

Question 50.
Explain how, chicks are born. How much time does the embryo present in hen’s egg take to develop into a chick (when provided sufficient warmth) ?
Answer:
In hens, internal fertilization take place but they do not give birth to chicks like human beings. After fertilization, the zygote divides repeatedly to form embryo which travels down the oviduct. As it travels down, many protective layer are formed around it.

The outermost protective layer is hard shell which we can see in a hen’s egg. After the hard shell is formed around the developing embryo, the hen finally lays the egg. The hen, then sits on the egg to provide sufficient warmth to the eggs for the development of the embryo into the chicks. The embryo takes about 3 weeks to develop into a complete chick.

Question 54 A.
What are gametes ?
Answer:
The cells involved in sexual reproduction are called gametes.

Question 54 D.
What is this act of fusion called ?
Answer:
The fusion of a sperm with an ovum to form a zygote during sexual reproduction is called fertilization.

Question 58.
What is meant by ‘reproduction’ ? why is it essential ?
Answer:
Reproduction is one of the important characteristics of living things. The ability of organism to produce young ones of its own kind is called reproduction. It is essential for the continuation of a species.

Question 60.
What is a clone ? Name one famous clone.
Answer:
The organisms which are produced asexually are genetically identical to the parent and are called clones.

Dolly was born on 5th July 1996 and was the first mammal to be cloned.

Question 61 B.
Draw a labeled diagram to show the fertilization of a human egg by a sperm to form a zygote.
Answer: 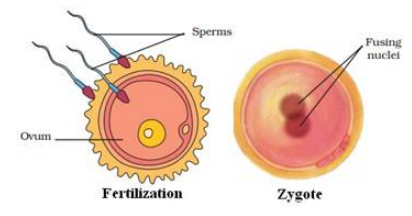 The process involves monitoring and stimulating a woman’s ovulatory process, removing ovum or ova (egg or eggs) from the woman’s ovaries and letting sperm fertilise them in a fluid medium in a laboratory. Question 65.
How does a Hydra reproduce ? Explain with the help of labeled diagrams.
Answer:
Hydra reproduces by budding. In hydra, there may be one or more bulges. These bulges are the developing new individual and they are called buds. This bud then grows gradually to form a small hydra by developing a mouth and tentacles. The tiny new hydra detaches itself from the parent body and become new independent individual.

Question 67.
The number of nuclei present in a zygote is :
A. none
B. one
C. two
D. four
Answer:
B. one
The correct answer is one nucleus is present in the zygote.
Explanation: Zygote is the formed due to fertilization of the gametes. During fertilization, the nuclei of the sperm and the egg fuse to form a single nucleus.

Question 69.
Fertilization results immediately in the formation of :
A. a zygote
B. an embryo
C. a placenta
D. a foetus
Answer:
A. a zygote
The process by which male and female gametes fuse to each other is called fertilization.

Question 81.
Reproduction is essential for living organisms in order to :
A. keep the individual organisms alive
B. fulfill their energy requirements
C. maintain growth
D. continue the species for ever
Answer:
D. continue the species for ever
Reproduction is one of the important characteristics of living things. The ability of organism to produce young ones of its own kind is called reproduction. It is essential for the continuity of species.

Question 82.
One of the following occurs reproductive system of flowering plants well as that of humans. This is :
A. sperm ducts
B. anther
C. ovary
D. style
Answer:
C. ovary
Ovary is the structure that occurs in the reproductive system of flowering plants as well as of humans. In both of them, it produces female gametes called egg.

Question 86.
Two very small organisms X and Y both reproduce by the method of budding. Organism X is industrially very important because it is used in making alcohol from sugar. It is also used in making bread. Organisms Y is a tiny animal having tentacles which live in water.
(a) What is organisms X?
(b) Name the process in which X converts sugar into alcohol.
(c) To which class of organism does X belong?
(d) What are organisms Y?
(e) Out of X and Y, which organism is multicellular and which one is unicellular?
Answer:
(a) X is Yeast.
Explanation: Yeasts are unicellular fungi which convert glucose into alcohol through the process of fermentation.

(c) The organism X i.e. Yeast belongs to the fungi of living organisms.
Explanation: Yeast is a single-cellular organism which divides by mitosis and shows budding. Fungi have the following characteristics:

Question 87.
A unicellular organism P lives in pond water. The organisms P has no fixed shape, its shape keeps on changing. It moves and catches its prey with the help of organs Q which keep on appearing and disappearing. The organisms P reproduces by a process R. Another organisms S also reproduces by this process. Name P, Q, R and S.
Answer:
P is Amoeba ; Q is Pseudopodia ; R is Binary fission ; S is Paramecium.

(b) Examples of Animals like X are Frog, Fish and Star Fish etc.

(c) General Name of Animals Like Y is Viviparous. Viviparous animals are those animals in which the young ones develop inside the uterus of the mother.

Question 90.
A is an insect which breeds in ponds of stagnant water. The egg of this insect produces a worm like form B which is entirely different in appearance from the adult insects. The form B undergoes a change C and gets converted into insects A. The female of insects A is a carrier of protozoan D which spreads a disease in humans.
(a) What are A, B, C, and D ?
(b) Name another insect which also undergoes change C.
Answer:
(a) A is Mosquito; B is Larva; C is Metamorphosis; D is plasmodium
(b) Butterfly is another insect which also undergoes metamorphosis.